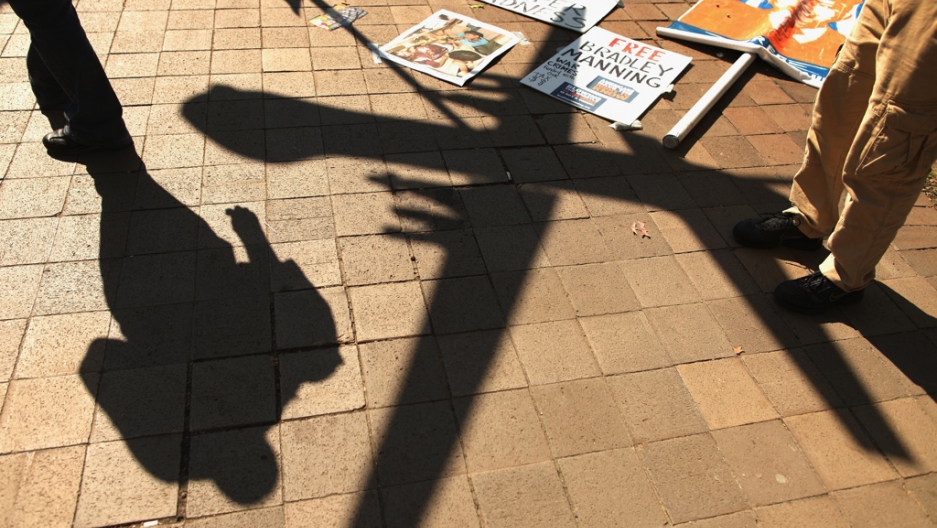 A model of a military drone casts a shadow on the ground during a protest Oct. 6, 2011 in Washington, DC.
Credit: Chip Somodevilla
Share

HOLLOMAN AIR FORCE BASE, New Mexico — It is not at all, participants say, like waging war by Wii.

Almost everyone involved with unmanned aerial systems winces when they hear their vehicles called “drones.” It’s a misrepresentation, they say, to conflate their highly-sensitive aircraft — navigated by a team that includes a certified pilot — with truly pilotless machines.

Drones are “what we shoot down!” said Lt. Col Brent, a combat pilot now training others for unmanned missions at New Mexico’s Holloman Air Force Base, the premier training site in the US for pilots of unmanned aerial vehicals, or UAVs. Brent is one of three Air Force pilot trainers who agreed to be interviewed by GlobalPost on the condition that their last names are not published.

The pilots said that it’s not just their aircraft that are misunderstood. They’re well aware of a public perception that pilots like them simply push a button to blithely drop bombs on people they’ve never seen in countries they’ve never visited, all from the comfort of their US air base.

Pilots at Holloman said they’re not surprised the public may have such a view, since even some experienced flyers arriving for training here have mistaken ideas about what it’s like to be the human element in a UAV. After all, these guys walk out the door of their simulated cockpits and go home to their families at the end of a work day.

“Is it as exciting as flying a fighter?” asked Lt. Col. Mike, another instructor at the base. “I would say no, it’s not. You’re not riding a rocket. You’re not sitting in an ejection seat. But the capabilities that this aircraft has and the mission it brings for the Air Force and the Department of Defense as a whole is incredible.”

“That’s one of the things I tell guys who’ve flown other aircraft,” he continued. “It’s not some kind of computer game. They need to have every bit of situational awareness just like in a normal aircraft. It’s certainly not easy.”

In fact, Brent said, it’s more challenging to navigate the UAV because of the absense of some of the sensations and resulting intuition you might gain from flying an actual plane you don’t have when flying a UAV, which can make the mission more challenging.

In the simulated cockpits from which pilots in the US guide Predators or Raptors in counterterrorism missions in Afghanistan, Pakistan and other countries, there is no sense of up, down, left or right, Brent explained.

“Your visibility is like looking through a soda straw because you’re just looking at one thing at a time, based on the capabilities of the camera, whereas in a real aircraft you can look around very easily,” he said.

But a simulated cockpit has distinct advantages as well. These pilots, who have all seen combat duty themselves in manned aircraft, said the safety allows them to do their job more effectively.

“You’re going slow and you’re not worried about ejecting or the environmental factors you have in a manned aircraft, your ability to really concentrate on exactly what’s happening is much better,” Brent said.

Mike agreed. “You’re not in a rush to make a decision because you’re not pressured by fuel or speed or anything like that,” he said.

Lt. Col. Steve, another trainer, said that the public doesn’t realize that when UAV pilots are on a mission, they are bound by the same set of rules of engagement as a manned fighter jet is, meaning that the differences are actually pretty slim, he said.

“It’s the same exact communication flow that happens whether it’s an F15E or an A10. We’re on the radio in the same way talking to the same people,” he said.

Still, such similarities do little to mitigate the ethical concerns many have about unmanned warfare. Yosef Lapid, a professor of international relations who specializes in terrorism and the Middle East at New Mexico State University, just an hour away from Holloman Air Force Base, said he thinks there needs to be a much more serious public debate about the use of UAVs for combat missions.

More from GlobalPost: The rationale behind America's drone war

Lapid said he doesn’t think that pilots feel less responsibility when they fire a missile from Nevada instead of Pakistan, but he does think there is a lot about the program that is not understood. For one thing, he said, “if reducing the number of casualties or the risks that soldiers are assuming on the battleground, if that means killing becomes facile or societies have less problem engaging in war, then it’s a very serious problem.”

And there’s another problem, Lapid said, one that is more philosophical, but no less dangerous.

“When you look at how the laws of war have emerged, there’s a sense that the underdog should have some decent chance of challenging,” he said. “I think these technologies violate that sense of justice.”

Lapid also worries about the long-term effects of using UAVs in places like Afghanistan and Pakistan. In all the countries where armed UAVs are flown, large protests have erupted among the civilian population, which has at times suffered enormous casualties.

“It’s important to ask that question … not only how many terrorists we’re eliminating but how many new terrorists we are creating,” he said.

Whatever that number, the US plans to be ready for them. Before long, the US Air Force will be tasking more pilots to fly UAVs than manned fighter jets.