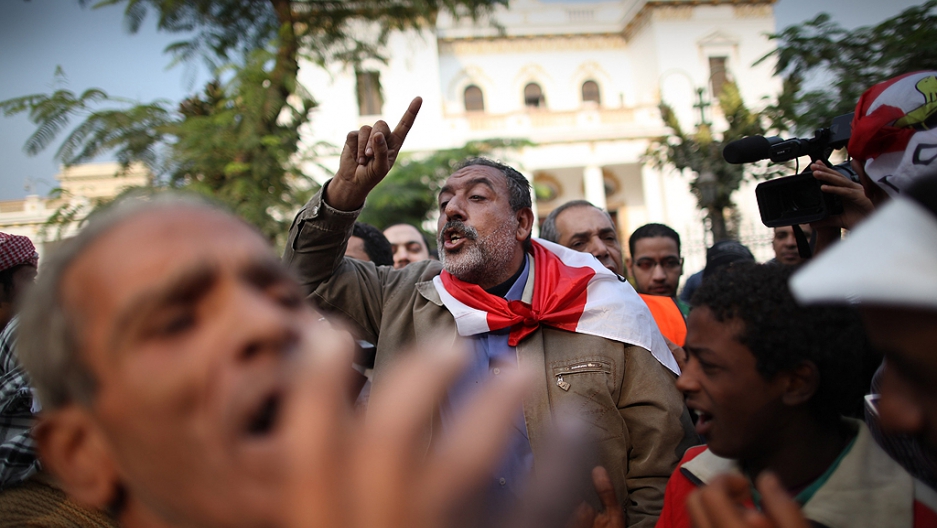 Protestors chant in front of the parliament building as they support a sit-in at the nearby cabinet office on November 26, 2011 in Cairo, Egypt. Thousands of Egyptians are continuing to occupy Tahrir Square ahead of parliamentary elections to be held on November 28.
Credit: Peter Macdiarmid
Share

Around 300 protesters lit cars on fire and threw rocks and Molotov cocktails at security forces early Friday morning, following reports from the demonstrators that an activist had been detained and beaten by military soldiers.

CNN described the security response: "Bricks and cement blocks rained down on protesters as men appearing to wear military uniforms tossed them off the top of a six-story [cabinet] building."

Hundreds of protesters threw rocks and firebombs at military police. Activist Hussein Hammouda says security forces responded by throwing rocks and aiming water cannons from inside the gates of the nearby parliament building.

Several hundred anti-government demonstrators have occupied a street near Egypt's cabinet building - just down the road from Tahrir - since late November, hoping to block the country's new prime minister from entering the offices.

Here's Al-Masry Al-Youm, an independent daily newspaper, on how the clashes started on Friday:

The sit-in protesters said that the clashes started after one of their fellow protesters, Aboudi Ibrahim, was kidnapped at night. Ibrahim was reportedly arrested by police, beaten and electrocuted, before being released. He was transferred to the nearby Qasr al-Aini Hospital.

This is a picture of the scene outside Egypt's parliament building around 11:30 AM Cairo (4:30 AM ET), via Al-Jazeera's Evan Hill:

Sharif Kouddous, an independent journalist in Cairo, uploaded pictures from the scene, including one of an injured protester:

Some trying to treat wounded in side streets of Garden City #occupycabinet twitter.com/sharifkouddous…

The clashes in Cairo on Friday come one day after protesters occupying the streets outside Egypt’s cabinet claimed that they were deliberately poisoned with tainted food.

The mass food poisoning of sit-in protesters outside the cabinet building Wednesday night was not a coincidence, said the April 6 Youth Movement in a statement Thursday.

The youth movement described the incident as part of an “elimination process” for the revolution. The process, the statement went on, started with military trials for revolutionaries, and developed into killing Maspero protesters, using lethal tear gas canisters against protesters on Mohamed Mahmoud Street, and finally attempting to poison the cabinet protesters.