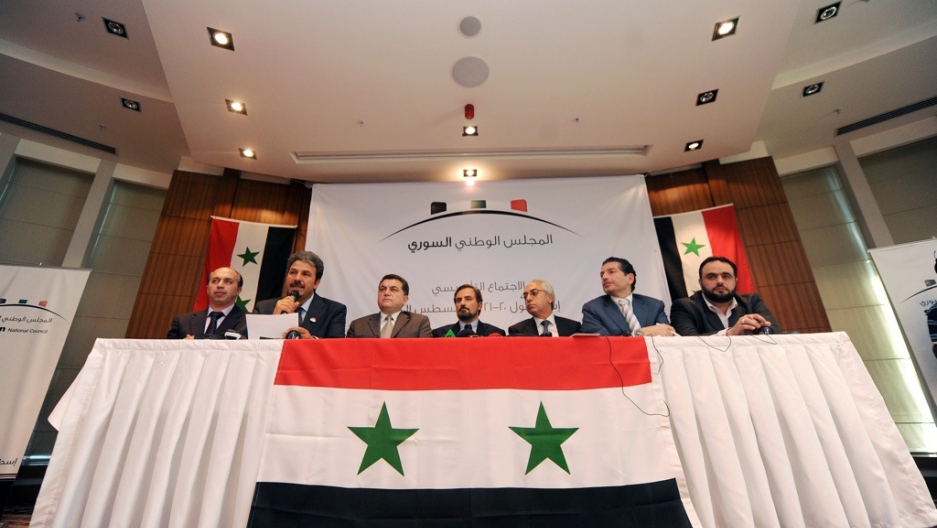 ISTANBUL, Turkey — At the new offices of the Syrian National Council, a self-styled transitional government-in-exile that unites leftists, Islamists and members of other factions among the Syrian opposition, boxes of supplies still need to be unpacked and the smell of new office furniture lingers.

It is from these offices, inside a building more accustomed to hosting import/export businesses, where representatives of the popular uprising in Syria plan to work toward greater legitimacy and international recognition.

"When governments recognize this office as the office of the Syrian National Council, I will be able to feel the emotions that come with having done this," said Halit Khodja, a Council member.

The chief agenda for the Council at the moment is to gain legitimacy in the international community as the representative of the Syrian people. Ultimately, the Council hopes that foreign governments will act on such recognition through humanitarian aid and military intervention.

"After the Arab League decided to pressure Bashar al-Assad's regime with sanctions, pressure from the rest of the international community has started to dwindle," Hodja said. "The people of Syria want concrete steps to be taken. At this point, expecting reforms from a government led by a man that is in the mindset of Gaddafi is pointless."

The Assad regime has continued to cling to power, taking dubious steps toward reform that have been characterized by members of the uprising as cosmetic and insincere.

Local elections, for instance, were held in Syria on Monday. SANA, Syria's state-run news agency, quoted an official from Damascus, who said the polls took place in "an atmosphere of transparency marked by honesty and democracy."

People inside Syria, however, painted a very different picture.

More from GlobalPost: Syria: How it all began

"It was a big lie for the media," said Omar Shaker, an activist and resident of Homs, which has been especially hard hit by the crackdown.
The city has been under siege, with trenches dug by state forces that are being used to cut off parts of the city. According to Shaker, fuel and food have become increasingly difficult to find and even then, their prices have doubled.

"I went to see the voting, not to vote, of course, but to see what was going on. I saw that they put some security people in civilian clothes and the Syrian media was taping it to make it look like the Syrian people were going to the elections," he said.

Others called the elections, which were scheduled just under a month ago, business as usual for the Assad regime. "This is the democracy of a single party. It is a comedy play. We always know the results before we even vote," said Muhamed Fadi, a resident of Damascus, in a phone interview.

Even in Damascus, which has seen relatively few demonstrations compared with other Syrian cities, attendance was sparse, according to activists.

"In Damascus the people who went to these elections were very few in number. I saw it with my eyes," Omar said. "Bashar knows that we don't believe him but he wants to convince the other countries."

Pressure on Syria has been mounting since Turkey, once a major trading partner and close ally, imposed economic sanctions. But so far the international community has not answered opposition calls from within Syria to impose a buffer zone and implement a no-fly zone, measures that, activists say, are necessary to protect civilians and force Assad's hand. The United Nations Security Council remains divided, with Russia and China throwing their support behind the Assad regime.

UN estimates on the number killed in the Syrian uprising since it began nine months ago now exceed 5,000. The overall death toll in Syria may be more than 6,000, with the Assad regime claiming that 1,100 members of Syrian state security forces have been killed by what they describe as "armed gangs."

Meanwhile, the Syrian military, unlike that in Egypt, remains largely unified under the leadership of the regime, although a rebel army, called the Free Syrian Army, has begun to attract more and more defecting soldiers.

When soldiers decide to defect they contact local activist networks who provide them with shelter and food. In return, the defecting soldiers begin defending the area, providing them with cover, activists said.
"The people are trying to encourage soldiers to defect," said Shaker. But the Free Syrian Army, which has been carrying out attacks on government targets, does not have the heavy artillery that the regular army has and must rely on what defecting soldiers can bring with them or what can be smuggled into the country. And that has not been easy to do.”

According to Amir, an activist living in the Turkish border city of Hatay, the physical necessities of resistance are growing harder to come by. While the revolution remained peaceful, the border between Syria and Turkey remained a major traffic hub, with Turkey serving as a major conduit of communication equipment and aid into Syria.
"They averted their eyes for communication equipment, but smugglers trying to enter small weapons or ammunition they catch," he said. "The Turkish government is very good about helping in terms of humanitarian stuff. But when it comes to weapons, they get very angry."