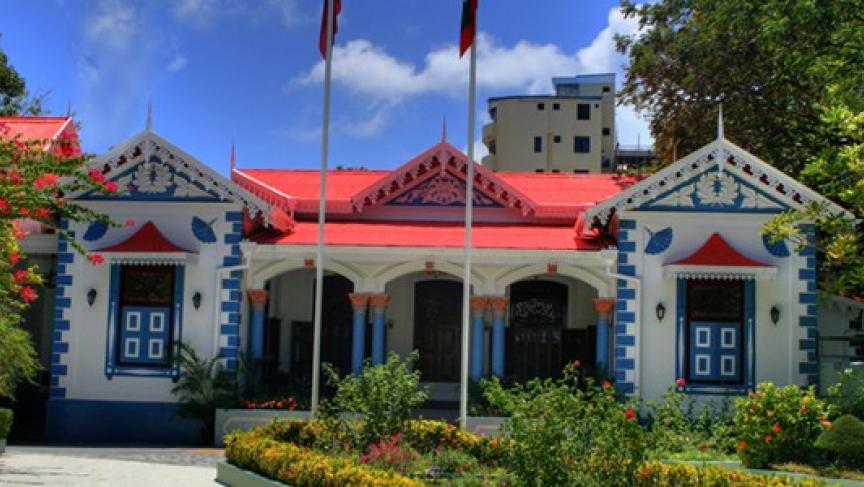 In the Maldives, India and China are jockeying back and forth for influence. The country's presidential palace is pictured. (Photo by A Robustus via Wikimedia Commons.)

A rivalry between two of the world’s emerging powers is taking shape in an unlikely place: the Maldives.

The Maldives is known more as a honeymooners' paradise than a foreign policy destination. India and China are jockeying for influence in the Maldives, a tiny country of 1,200 islands scattered across the northern Indian Ocean.

In the Maldives’ capital, Malè, there’s a new embassy in town. China is the first and only non-South Asian country with a delegation in the country.

With fewer than 400,000 people, the Maldives ranks just 179th in the world for GDP, but the Chinese love it.

The Chinese are the biggest segment of tourists in the Maldives, where almost 30% of the economy depends on tourism. But the beautiful beaches aren’t the only draw.

The Chinese Embassy opened just two days before the Maldives hosted a gathering of the eight South Asian leaders last month. For the next year, President Mohamed Nasheed will head the South Asian Association for Regional Cooperation.

“I believe that Asia, and South Asia in particular, is becoming more powerful and more prominent than at any time in our history. I believe the future is ours to shape,” President Nasheed said to loud applause.

That’s heady talk, but SAARC isn’t talked about much in the rest of the world. Even here, some people question its effectiveness as a forum for its members. In theory, SAARC works somewhat like the European Union, facilitating cooperation on issues like security, trade and development.

It’s not always easy with rivals like India and Pakistan in the same room. And it was no small feat when China was added to the mix as an observer 5 years ago.

China’s efforts to gain greater status in the group have so far failed. Experts say India has a lot to do with that.

India considers South Asia its turf. Prime Minister Manmohan Singh made that clear during a state visit to the Maldives just after the SAARC summit.

“This is our extended neighborhood,” Singh said. “We wish to work with the Maldives and other like-minded countries to ensure peace and prosperity in the Indian Ocean region.”

Singh’s visit was the first by an Indian premier in nearly a decade. Paikiasothy Saravanamuttu, Executive Director of the Center for Policy Alternatives in Sri Lanka, said India wants to create a buffer against rising Chinese influence in the region.

“The Indians want to remind the Chinese that they’re the preeminent regional power,” Saravanamuttu said. “And they’ll lose no time in asserting that they are the power to be reckoned with.”

In a short address at the end of the gathering, Zhang Zhijun, China’s vice foreign minister, reminded his neighbors of their historical connection.

“China and South Asian countries have been long linked through a common destiny and stood together through thick and thin,” he said. “Friendly contacts date back nearly 2000 years.”

Some experts say China has its eye on the Maldives as it tries to gain improved access to SAARC. D.S. Rajan of the Chennai Center for China Studies said China’s interest in the Maldives is tied to the tiny country’s location. China wants to protect its goods as they pass through the Indian ocean.

But the Maldives’ leadership of SAARC might also play a role.

“SAARC has got the potential to grow, in spite of tensions,” Rajan said. “I personally believe that maybe China’s game is to improve its influence in SAARC through Maldives, possibly, being nice to Maldives.”

The Maldives is reaping the benefits of the rivalry of the world's two largest countries. Singh promised a $ 100 million line of credit from India to the Maldives. The two countries also signed a security pact.

Saravanamuttu said India suspects China is using investments, especially financing new ports in Sri Lanka and Pakistan, to try to envelop India, economically and perhaps in other ways as well.

“The worst Indian fears are the Chinese are trying to establish a military presence in South Asia and using these ports as military ports in all of the countries, which will constitute a string of pearls to contain India," Saravanamuttu said. So it is a new balance of power emerging with India and the U.S. on one side and China on the other.”

Although no Indian ports are planned in the Maldives, more cooperation with India is in the works, including a ferry service between the two countries.