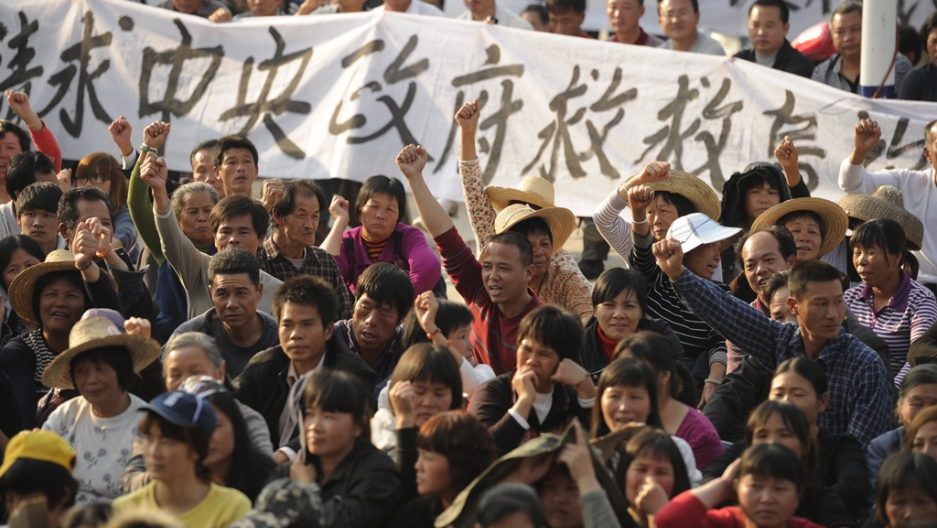 Residents of Wukan, a fishing village in the southern province of Guangdong, rally to demand the government take action over illegal land grabs and the death in custody of a local leader on Dec. 15, 2011.
Credit: Peter Parks
Share

Could the tiny city of Wukan in southern China be a turning point for mass protest and dissent in China?

Probably not. But it has become a fascinating and potentially dangerous (for both the government and protesters) case study, with mass riots boiling over to the point that local officials have reportedly left town.

Hong Kong's South China Morning Post reported Monday that Beijing has vowed to crack down on the protests, though it's unclear what might happen next.

China is no stranger to mass civil unrest. Though public security officials haven't released the official numbers in five years, there are believed to be around 180,0000 "mass incidents" every year in China.

Mass incidents, as they're called here, can include demonstrations, protests, gatherings where people come together to complain about local governments and unfair treatment. Most often they are linked to forced land grabs and government relocation schemes. Toxic pollution and labor issues are also major sources of unrest.

In Wukan, government land seizures from villagers, dating back two decades, are at the heart of the unrest.

The trouble began three months ago when villagers began to complain and protest, and tensions boiled over when a 42-year-old villager died in police custody, according to local reports. Police say the man had a heart attack, but his family said he appears to have been tortured while in police custody.

In the latest twist, local government officials have fled town, basically turning over the city of 20,000 to the locals and potential mass chaos. Villagers say police are blocking food from coming into the town, but if recent history is any indication, the lawlessness and open revolt won't last long. In several other incidents this year, China has brought in paramilitary troops to quell things like labor strikes and other forms of unrest.

In one sign of how sensitive the issue is, government censors have blocked searches for Wukan on the wildly popular microbllogging service Sina Weibo.