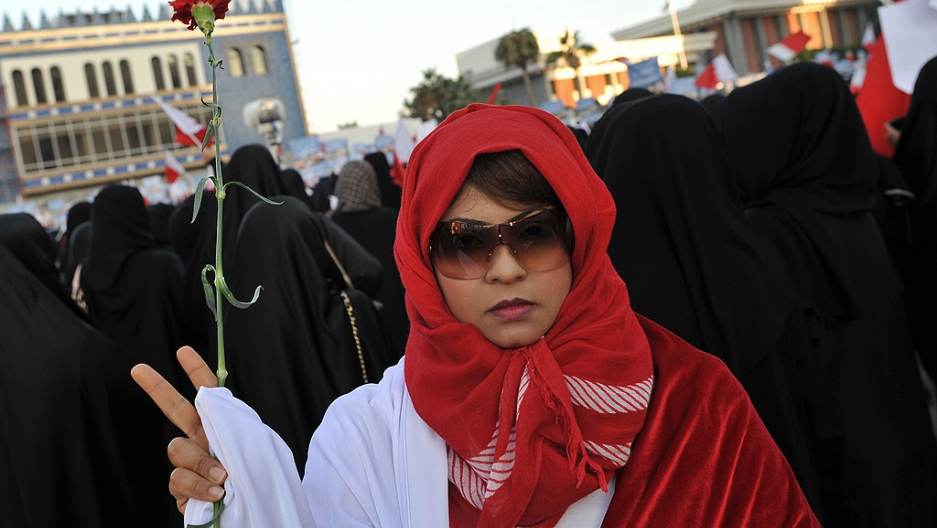 A Bahraini Muslim Shiite woman makes the victory sign while holding a carnation during an anti-government rally outside the United Nations office in the Bahraini capital Manama on December 14, 2011.
Credit: STR
Share

Bahraini security forces fired tear gas and stun grenades Thursday to disperse a crowd of hundreds of protesters who attempted to occupy a portion of a major highway in the Gulf kingdom, according to the Associated Press.

Journalist Lauren Bohn, who was reporting at the scene in Bahrain, posted pictures of the white tear gas clouds on Twitter.

More from GlobalPost: Bahrain becomes flashpoint in relations between US and Saudi Arabia

Bohn said that the police firing rounds of tear gas "has become nightly routine" in Bahrain.

That may be, except for one thing: the U.S. Assistant Secretary of State for human rights, Michael Posner, was in Manama when the clashes broke out Thursday.

Here's the AP on Posner's visit:

In prepared remarks to reporters, he praised the king for taking steps to implement reforms recommended in a report last month that outlined human rights abuses carried out by the government. He called on both the government and protesters to refrain from violence.

Posner urged the government to do more.

He cited "the need for tangible action on several urgent issues," including reinstating workers unfairly dismissed from their jobs. He also raised concerns about court cases involving doctors and others that he said appear to be based at least in part on their criticism of the government, as well as proposed media laws that could stifle political debate.

Washington also remains concerned about the government's "excessive use of force, including tear gas, in response to ongoing street protests," he said.

.aellick and I just directly shot at with teargas outside of Country Mall in #Bahrain lockerz.com/s/165063388