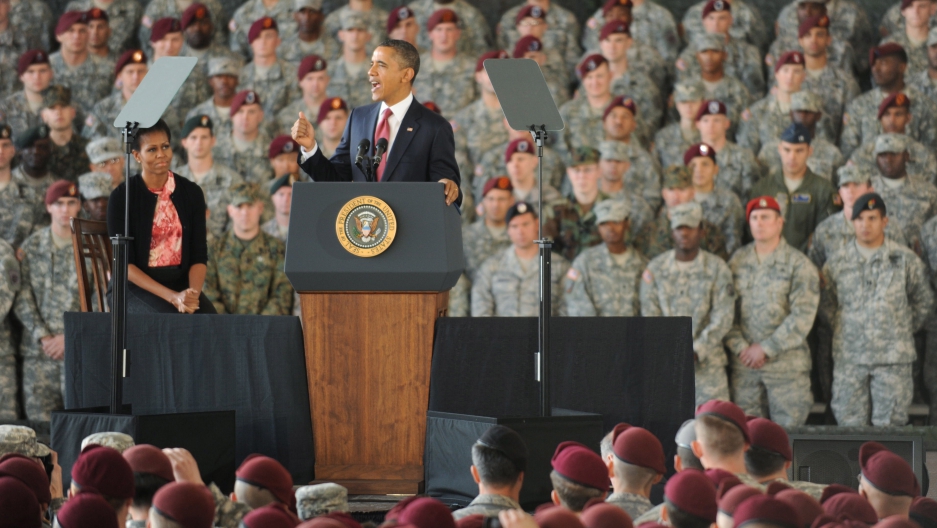 ROCK HILL, SC - DECEMBER 14: President Barack Obama honors troops returning home from Iraq during a visit on December 14, 2011 to Fort Bragg, N.C. America is ending its war in Iraq and all U.S. troops are scheduled to be removed from Iraq by December 31. (Photo by Davis Turner/Getty Images)
Credit: Davis Turner
Share

President Barack Obama marked the end of the Iraq war on Wednesday, speaking to troops about the year-end withdrawal and paying tribute to those that fought and died in the conflict, the Washington Post reported.

The president, accompanied by first lady Michelle Obama, gave his speech at Fort Bragg in North Carolina before service members and their families. The Fort Bragg base has lost more than 200 soldiers over the last nine years of fighting in Iraq. This was Obama’s first visit to Fort Bragg as president.

Read more at GlobalPost: 8,000 US troops left in Iraq, down to zero by end of year

Obama welcomed troops home and spoke about “the enormous sacrifices and achievements of the brave Americans who served in the Iraq War, and he will speak about the extraordinary milestone of bringing the war in Iraq to an end,” ABC News reported.

This speech was a part of Obama’s long farewell to the war. Earlier this week he met with Iraq Prime Minister Nouri al-Maliki at the White House to discuss the future of the U.S.-Iraq relationship, ABC News reported.

The withdrawal of troops was framed by Obama as a promise kept from his 2008 election campaign, the BBC reported. He said troops were leaving Iraq with “heads held high,” and focused his speech on his commitment of ensuring veterans to find jobs and resources needed when they return to the US, the BBC reported.

All American troops are scheduled to be out of Iraq by Dec. 31. Majorities of the US public favor ending the war, although some Republicans have criticized the president’s withdrawal, arguing he is leaving behind an unstable Iraq that could hurt US interests and fall subject to influence from neighboring Iran, the Associated Press reported.