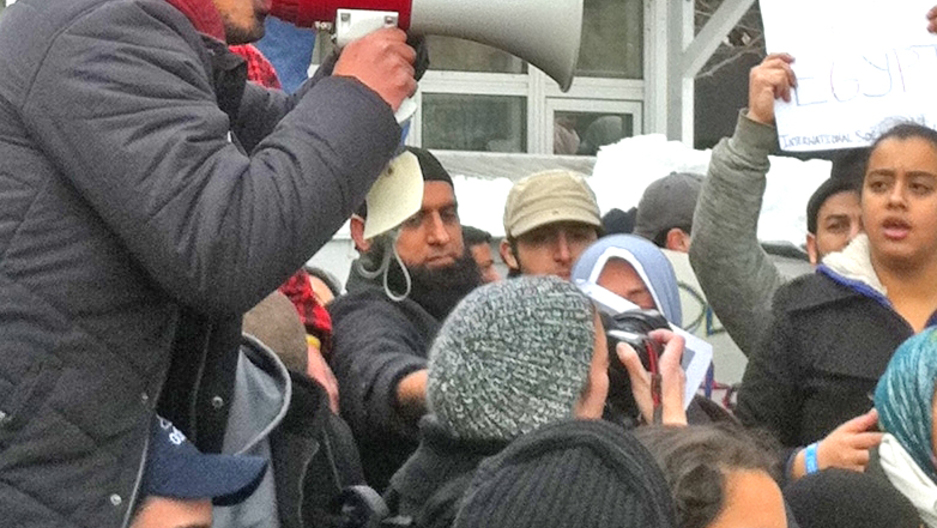 This morning, TIME announced 2011's Person of the Year: The Protester. Studio 360's own Kurt Andersen wrote the cover story, and was sworn to secrecy so we were just as surprised as everyone else. But in retrospect, we probably could have seen it coming. We've been covering the art and culture of global protest all year long [see below], from Egypt to Russia to the Occupy Movement in our own backyard.

In his article, Kurt traces the evolution of the protester --- a figure who in the last 20 years was "mostly confined to pop-culture fantasy":

"Fight the Power" was a song on a platinum-selling album, Rage Against the Machine was a platinum-selling band, and the beloved brave rebels fighting the all-encompassing global oppressors were just a bunch of characters in The Matrix.

But starting with Mohamed Bouazizi, the Tunisian street vendor who set himself on fire a year ago, the protester has again become "a maker of history." No matter on which continents' streets they gathered the protesters have much in common. "They are disproportionately young, middle class and educated," Kurt writes, and while technology played a huge role so did spontaneous protest art.

Belarus Free Theatre
At Studio 360, the year of the protester began with Kurt's interview of Natalia Kaliada, co-founder of the Belarus Free Theater. Belarusians have been resisting the country's totalitarian regime since the break up of the Soviet Union. In January, Kaliada was arrested at a protest. She was threatened and detained by the KGB before fleeing to the United States with her company to perform in New York. Kaliada spoke about being an artist in Belarus. "When we stay inside [the country,]" she said, "It's just like four walls around you. You just feel squeezed all the time."
Egypt: Poetry at the Revolution
In February, Kurt interviewed Egyptian poet Tamim al-Barghouti, who wrote a poem, roughly translated as "Oh Egypt, It's Close," in the middle of the uprising in Cairo. Protesters installed two giant video screens (bed sheets, really) in Tahrir Square to broadcast Barghouti reading the poem live on Al-Jazeera every two hours.

Libya's Soundtrack to the Revolution
In July as the Arab Spring spread to Libya, Kurt spoke to the poet Khaled Mattawa about his country's soundtrack to the revolution. Mattawa said that American-style hip-hop (with Arabic lyrics) was an especially effective mode of protest: "It was a way to tune out, to almost drown out any noise coming from the regime, to have a forum for expressing anger."

Street Art Storms Russia
In September Kurt talked to Newsweek's Moscow correspondent Anna Nemtsova about a group of underground street artists who were stirring up opposition to Russia's current regime. One group painteda 210-foot phallus on a drawbridge facing the Federal Security Bureau, the former KGB, while others mocked Vladimir Putin in illegal billboards. "They declared a war," Nemtsova told Kurt, "to state corruption, injustice, and the political regime."

Private Space Gone Public at Wall Street
Finally, in October the protests came home, just blocks from our studio at WNYC. Kurt visited Zuccotti Park with New York Times architecture critic Michael Kimmelman to discuss how protesters at Occupy Wall Street had created a new kind of urban space. The park was an anonymous plaza that workers raced through to get to the buildings surrounding it, Kimmelman told Kurt, but now it had changed for the better. "It really works when it's occupied, when you really get a lot of people in it," Kimmelman said. "The people make the place, as always."

VIDEO: Kurt Andersen on Why TIME chose "The Protester"