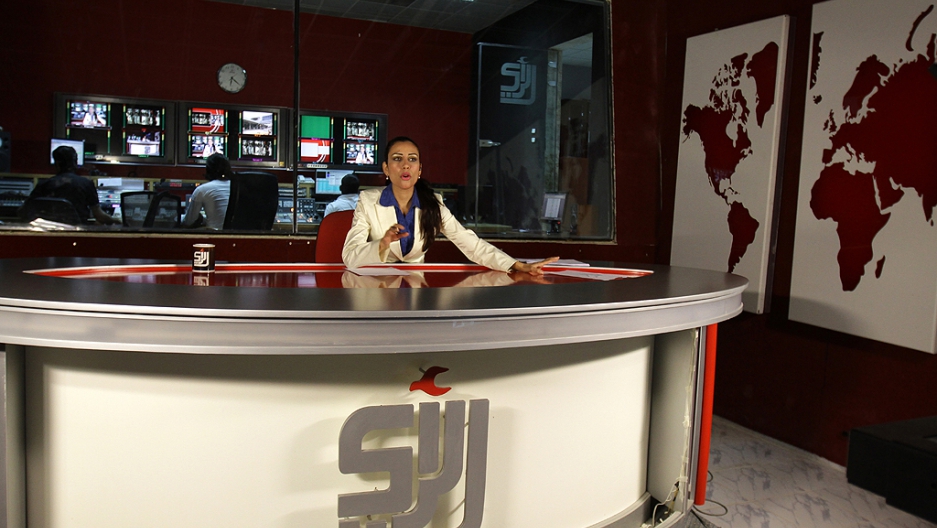 A anchor woman sits at a desk at Mishan al-Juburi' studios, in the upscale Yafur district of Damascus, where he has set aside part of his palatial compound to house Arrai, an Arabic television channel that has become the favoured forum for Libyan strongman Moamer Kadhafi, on September 26, 2011.
Credit: LOUAI BESHARA
Share

A television network that once gave a voice to Muammar Gaddafi - as the former Libyan leader was attempting to flee from rebel fighters (see here and here) - was taken off Syria's airwaves last week.

The Associated Press reports that Al-Rai TV, a station based in Damacus, closed its doors on December 5.

Al-Rai has devoted much of its programming to criticism of the U.S.-led invasion of Iraq since it opened in 2004.

But with the American troop drawdown apparently running on schedule, Al-Rai’s Iraqi owner decided it was time to shut down, according to AP:

Mishan al-Jabouri, a former Iraqi lawmaker and Damascus-based exile, said it was "no longer suitable" to have a Damascus-based channel run by Iraqi opposition figures and so he has closed Al-Rai TV.

Al-Jabouri has long touted himself as an Arab nationalist opposed to U.S. interventions in the Middle East and a supporter of Iraqi Sunni insurgents against American troops. But now, with the last U.S. soldiers to leave Iraq by the end of the month, al-Jabouri said there was no longer a need for the station, which went off the air Dec. 5.

"This page has been closed, thus resistance in Iraq should come to an end as a result," he told The Associated Press in a telephone interview.