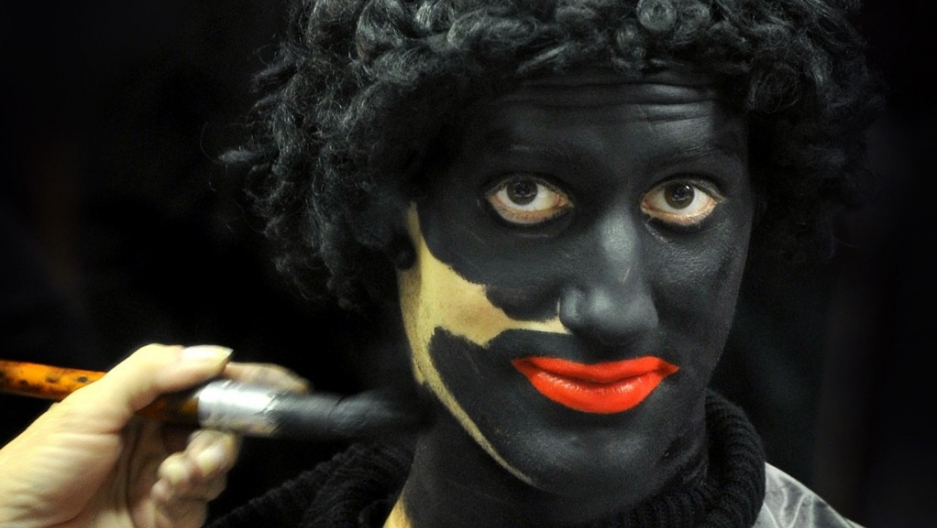 A person applies makeup on a man dressed as Black Peter prior to a celebration in a primary school, on December 3, 2010 in Soest, Netherlands.
Credit: Toussaint Kluiters
Share

ROTTERDAM, Netherlands — The arrival of Saint Nicholas at the end of November laden with gifts for the kids of Netherlands is a treasured annual event for Dutch families.

But as part of this tradition, white men play the part of Black Peter, Santa’s “African” helper. They wear silk britches and darken their faces with black boot-polish. This inevitably triggers an impassioned debate over whether the event is a cute tradition or a racist affront to Dutch society.

This year things took an uglier turn. Video footage of several Dutch policemen manhandling a pair of Caribbean-born artists wearing “Black Peter is Racism” T-shirts has prompted renewed soul-searching about how the famously-liberal Netherlands seems to have surged to the forefront of a new wave of European intolerance.

“It’s time the Netherlands offered protection to minorities regardless of religion, political orientation, race or gender,” seethed Sheldry Osepa, who represents the government of the Caribbean island of Curacao in the Netherlands.

Once renowned for its relaxed attitudes toward sex, drugs and immigration, the Netherlands has been shifting away from its permissive stance since the early 2000s.

Recent governments have tightened immigration laws, subjecting would-be newcomers to language and Dutch culture tests; limitations on immigrants’ rights to bring in family members have drawn criticism from European human rights officials; plans to ban the wearing of the burqa were unveiled in September.

Earlier this year, new restrictions hit the county’s famed cannabis cafes, and clean up drives have shut down many establishments in the red-light districts of Amsterdam and other cities.

Even the European project is beginning to pique Dutch sensitivities. Although polls show citizens largely remain enthusiastic supporters of European integration, there’s been widespread grumbling about the need to support the likes of Greece, Portugal and Italy in the current economic crisis.

“The euro has failed. Now it’s mainly used for sending money to the garlic countries,” said a recent tweet from Geert Wilders, leader of the Party for Freedom which wants a referendum on withdrawal from the euro zone.

The party won 15 percent in last year’s parliamentary election on an anti-immigration ticket, tripling its score and becoming the third largest party in parliament with significant influence over the center-right government.

Out of a population of 16.6 million in the Netherlands, there are 3.4 million with a foreign background according to the latest official statistics. Muslims account for about 5 percent of the total population, about 850,000 people, most of Turkish or Moroccan origin.

Debate about the role of Islam in Dutch society intensified after the 9/11 attacks on the United States and the assassination of Theo van Gogh, a filmmaker killed by a Dutch-Moroccan Islamist after van Gogh released a movie dealing with violence against Muslim women.

Such events combined with the growing assertiveness of younger migrants and external trends such as economic globalization, the expanding European Union and a perceived loss of Dutch identity have led to a backlash against outsiders and a return to more traditional values, experts say.

“This used to be a country that felt pretty good about modernity, about being able to direct it and ride it. Now they are less certain,” says Prof. James Kennedy, a specialist in modern Dutch history at the University of Amsterdam. “Part of this intolerance has to do with declining confidence in the political, social and religious leadership.”

Neighborhoods such as Rotterdam’s Oude Westen symbolized much of the angst felt by native Dutch.

In the early 2000s, the largely-immigrant district of 19th century row houses close to the city’s Central Station was notorious for violent crime and hard drug dealing. It was considered a no-go area by many of the city’s white inhabitants.

Now the neighborhood’s vibrant ethnic blend is touted as a tourist attraction, and on the surface everything appears harmonious.

“We’ve got a real mix of people here, something you don’t find anywhere else. Oude Westen is like a village in the middle of the city,” says Armando Sorrentino, a Dutchman with Italian roots, who works to promote business development in the area. “While intolerance has grown elsewhere, we’ve had the opposite trend here.”

The area still has problems, but locals say the community has worked together with city authorities to clean up the main shopping street West-Kruiskade with is jumble of Afro-hairdressers, Surinamese grocers, Chinese acupuncture centers, Moroccan bakers and the occasional “coffee shop” openly offering marijuana. Despite the area’s positive vibe, however locals are concerned about the wider changes in society.

“The boys and girls I taught never had any problem with my color,” said former secondary school teacher James Fitz-James, 63, who came to the Netherlands 40 years ago from the former Dutch colony of Surinam.

“Now politicians try to give them a different way of thinking about people from the Caribbean and Africa, or Turkey and Morocco. They talk about us as if we’re a danger to their jobs, their way of life,” adds Fitz-James, who now runs the Kotomisi Shop, selling Surinamese products including colorful dresses and a selection of herbal aphrodisiacs.

“We allowed immigrants to keep their own identity as long as they didn’t bother us, rather than developing mutual respect and true understanding,” he argues. “It wasn’t really inclusion and it couldn’t last.”