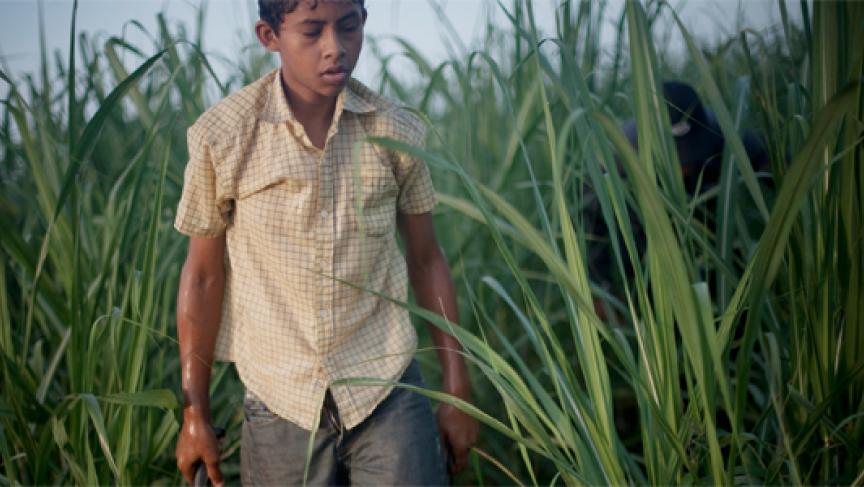 A sugarcane worker in Nicaragua. Many workers in the field have found that their kidneys are failing. (Photo by Anna Maria Barry-Jester.)

A mysterious epidemic is sweeping Central America – it’s the second biggest cause of death among men in El Salvador, and in Nicaragua it’s a bigger killer of men than HIV and diabetes combined.

It’s unexplained but the latest theory is that the victims are literally working themselves to death. In the western lowlands of Nicaragua, in a region of vast sugarcane fields, sits the tiny community of La Isla.

The small houses are a patchwork of concrete and wood. Pieces of cloth serve as doors.

Maudiel Martinez emerges from his house. He’s pale, and his cheekbones protrude from his face. He hunches over like an old man – but he is only 19-years-old.

“The way this sickness is – you see me now, but in a month I could be gone. It can take you down all of a sudden,” he said.

Maudiel’s kidneys are failing. They do not perform the essential function of filtering waste from his body; he’s being poisoned from the inside.

When he got ill two years ago, he was already familiar with this disease and how it might end.

“I thought about my father and grandfather,” he said.

Both died of the same condition. Three of his brothers have it too. All of them worked in the sugarcane fields.

The epidemic extends far beyond Nicaragua. It’s prevalent along the Pacific coast of Central America – across six countries.

“It is important that the chronic kidney disease (CKD) afflicting thousands of rural workers in Central America be recognized as what it is – a major epidemic with a tremendous population impact,” said Victor Penchaszadeh, a clinical epidemiologist at Columbia University in the US. He is also a consultant to the Pan-American Health Organization on chronic diseases in Latin America.

El Salvador’s health minister recently asked the international community for help. She said the epidemic is “wasting away our populations.”

At a health clinic in El Salvador, in the farming region of Bajo Lempa, Dr. Carlos Orantes recently found that a quarter of the men in his area suffered from chronic kidney disease.

What’s more, he said, most of the men who are ill show no signs of high blood pressure or diabetes – the most common causes of CKD elsewhere in the world.

“Most of the men we studied have CKD from unknown causes,” he says.

What the men in the area have in common is they all work in farming. So Dr. Orantes thinks a major cause of their kidney damage is the toxic chemicals – pesticides and herbicides – that are routinely used here in agriculture.

“These chemicals are banned in the United States, Europe and Canada, and they’re used here, without any protection, and in large amounts that are very concerning,” he said.

But he’s not ready to rule out other possible causes. For instance, the overuse of painkillers can damage the kidneys, and so can drinking too much alcohol. Both are major problems here, too.

In Nicaragua, the disease has become a political issue.

In 2006, the World Bank gave a loan to Nicaragua’s largest sugar company to build an ethanol plant. Plantation workers filed a complaint, saying the company’s working conditions and use of chemicals were fueling the epidemic. They said the loan violated the bank’s own standards on company's worker safety and environmental practices. In response, the bank agreed to fund a study to try to identify the cause of the epidemic.

“The evidence points us most strongly to a hypothesis that heat stress might be a cause of this disease,” said Daniel Brooks of Boston University, who is leading the research.

His team has found it’s not just sugarcane workers who are falling ill. Miners and port workers also suffer high rates of kidney disease, yet they’re not exposed to farm chemicals. What these men have in common, he said, is they all work long hours in extreme heat.

“Day after day of hard manual labor in hot conditions – without sufficient replacement of fluids – could lead to effects on the kidney that are not obvious at first but over time accumulate to the point that it enters into a diseased state,” Brooks said. “This has never been so far shown to cause chronic kidney disease, so we would be talking about a new mechanism that has not so far been described in the scientific literature.”

But Brooks said a new preliminary study bolsters this hypothesis. His team tested blood and urine from sugarcane workers who perform different jobs. The scientists found more evidence of kidney damage in the workers who have more strenuous, outside jobs.

“This way of working forces people to do more than they are able to do, and this is not good for their health,” she said.

Jose Donald Cortez has cut sugarcane for 18 years. He has kidney disease and heads an organization of sugarcane workers in Nicaragua who are ill

“Working in the field made us feel dizzy and nauseous,” he said. “We often had fevers.”

He’s convinced that something on the sugar plantations is causing the sickness. Whatever it is, he said, those who are ill need treatment with dialysis – which can keep them alive when their kidneys fail.

But few can get it because dialysis is extremely expensive and rarely available.

For their part, the sugarcane companies say they’re not convinced that farm chemicals or working conditions on their plantations are to blame for the epidemic. Still, they say, they are trying to protect their workers’ health.

Company spokesman Ariel Granera said if a worker is found to have kidney disease, he is let go – out of concern, Granera said, for the worker’s well-being.

But the sick workers who have been dismissed say what they receive from the companies and from social security isn’t enough to live on – and when they lose their jobs, they lose the right to be treated at company clinics.

In La Isla, and many other villages like it, the men often seek new employment with contractors who do not check for kidney disease yet send the men to work in the same sugarcane fields.

“There is no alternative,” said one woman who recently lost her father. “No other way to support a family.”