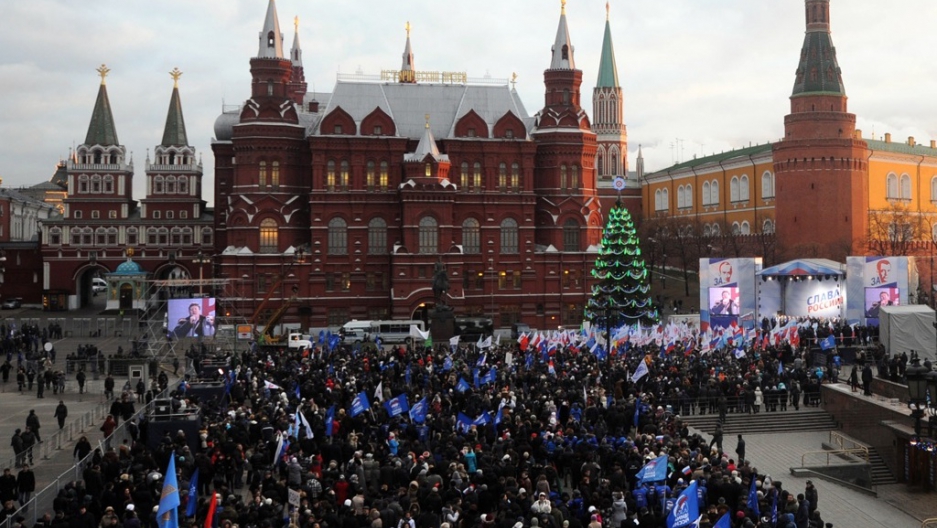 MOSCOW, Russia — The billionaire is back.

The political career of Mikhail Prokhorov, Russia's third-richest man, crashed and burned last September, after he quarreled publicly with the Kremlin, and subsequently lost control of his liberal Right Cause party.

Now he's going to try something even more ambitious: he says he will challenge Vladimir Putin for Russia's presidency in elections slated for March 4.

It's probably no coincidence that Prokhorov's surprise declaration came just two days after 30,000 mostly young and middle-class Muscovites — angry over alleged vote-rigging in Russia's Dec. 4 parliamentary elections — gathered on a downtown square to demand an end to the Putin-era system of "managed democracy."

Prokhorov himself played a key role in exposing that system to the world, when he briefly stood up 3 months ago and accused Kremlin political architect Vladislav Surkov of being a "puppet master," who stage-manages all political parties that are allowed on the Russian ballot. He accused Surkov of trying to tell him who could be allowed in the leadership circle of his party, Right Cause, what candidates they might run, and what political positions to take.

On Monday, in an otherwise vague and rambling press conference, Prokhorov appeared to lay down the gauntlet to the Kremlin.

"I've made probably the most serious decision of my life: I'm running for president," he told a roomful of stunned reporters in Moscow. "Society is waking up, whether we want it or not. Authorities that have proven unable to hold a normal dialogue with the population are clearly on their way out... I want to be the candidate of the middle class."

Prokhorov, 46, is worth about $18 billion, according to Forbes. He is best known in the US as the owner of the New Jersey Nets basketball team. He made his fortune in the murky privatizations of former Soviet raw materials companies in the 1990s. In Russia, the bachelor-tycoon has often been in the news for his playboy lifestyle, his love of amateur athletics, and his passionate promotion of nanotechnology and electric automobiles.

But Prokhorov — who did not appear at the Moscow rally but has pledged to attend the next one on Dec. 24 — may have a hard time overcoming the deep suspicion, on the part of the very people whose support he wants to attract, that he is actually a Kremlin stalking horse.

Just last week, as Moscow protests against alleged electoral fraud mounted, Prokhorov's nemesis, the "puppet master" Surkov, mused in a rare interview, with blogger Sergei Minayev, that what is missing from the political spectrum he engineered on behalf of the Kremlin is "a mass liberal party. . . to appeal to disgruntled urban communities."

Though Prokhorov insisted that he has not met with Surkov or Putin since the fiasco with his party, and added that "I have far fewer friends in the Kremlin than I used to," many Russian liberals say the tycoon's sudden offer to act as the champion of the beleaguered middle class smacks of nothing so much as Surkov-style stagecraft. The fact that Russian state TV channels reported Prokhorov's declaration as leading news — even though they completely ignored last week's anti-fraud protests and gave only sparing coverage to Saturday's huge Moscow rally — only inflames the skeptics.

"Prokhorov long ago came to terms with the Kremlin administration, and agreed to head the 'liberal party' project," designed by Surkov, says Sergei Mikheyev, director of the independent Center for Political Assessments in Moscow. "Many people believe that Prokhorov's departure from Right Cause was all an act, to boost his credibility. He knew the party (which received a dismal 0.6 percent of the votes on Dec. 4) wasn't going anywhere, and he didn't want to start his political career with a complete failure."

Former deputy prime minister Boris Nemtsov, co-leader of the liberal Party of People's Freedom — which has been banned from fielding its own presidential candidate — says flatly that Prokhorov's candidacy is "just a deal with the Kremlin. . . No billionaire can run for president in this country without Putin's agreement, and no serious candidate with a chance of winning would be allowed to run. Maybe he'll be rewarded after this with a new party of his own, or some government post," he says.

Political sociologist Olga Kryshtanovskaya, the leading expert on Russia's ruling elite, says "there appears to be some level of agreement between Prokhorov and the Kremlin, but no one is sure what it's about. "But why shouldn't Prokhorov go into politics? He's not married. He has no serious prospects of winning. He will make things a bit more interesting by diluting the company of old men," she says.

Indeed, Putin's competition in the coming presidential race is shaping up to be the usual stable of aging also-rans, whose limited appeal is dismally familiar.

One challenger is Communist Party leader Gennady Zyuganov, who's been repeatedly trounced by former President Boris Yeltsin and Putin in the course of his long career.

Another is Buffoonish ultra-nationalist Vladimir Zhirinovsky, who's run in every presidential election since 1991. Zhirinovsky delights his constituents with virulent anti-Western rhetoric and occasional racist remarks, but has never seriously challenged a single Kremlin policy in all those years. Sergei Mironov, the youngest of the pack at 58, was a longtime political ally of Putin who took the leadership of a Kremlin-sponsored leftish party, A Just Russia, in 2006.

Valery Fyodorov, head of the state-owned public-opinion agency VTsIOM, says Prokhorov may have a chance, if not now, then at some point in the future.

"Look at the candidates we have. Zyuganov is a man whose future is in the past. Putin is a man of the present, but he is not a man of the future," he says. "Russians have shown that they are not happy with the faces they know and are looking for a new force, a new man. Prokhorov might be a good candidate, if he uses the opportunity that's been handed to him wisely."