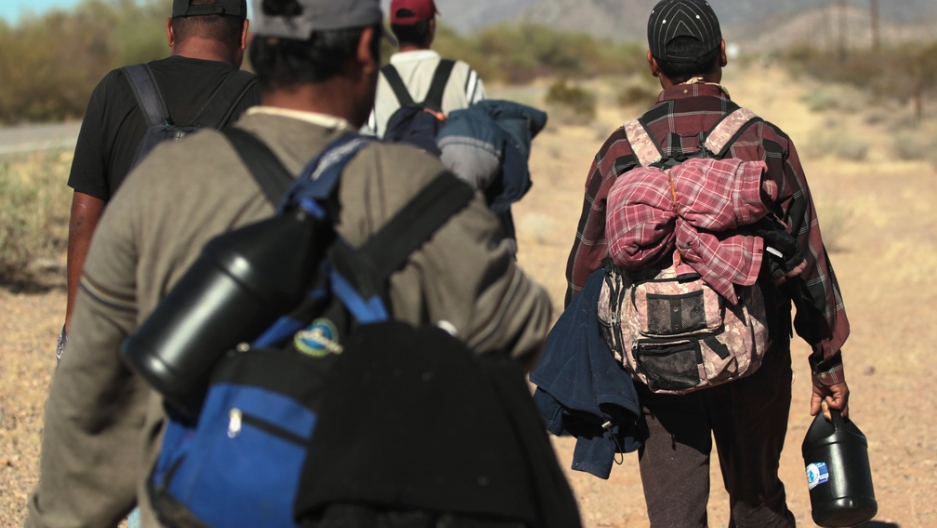 MEXICO CITY — Migrants and advocacy groups on both sides of the border urged the US Supreme Court to strike down the controversial Arizona immigration law that has sparked outrage in Mexico.

The renewed calls against the law — known as SB1070 — came after the Supreme Court on Monday announced it would wade into the issue and review federal court rulings that parts of the law are unconstitutional.

The decision was rapidly splashed across media outlets in Mexico, where politicians, priests and pundits have called the law "fascistic," "authoritarian" and "racist."

Read more: Mexico vs. the ICC?

In Tucson, Arizona, some 300 migrants and activists marched against SB1070 and increased deportations, holding banners of the Virgin of Guadalupe, the Catholic symbol venerated throughout Mexico.

“This is a law which somehow allows racial profiling,” Jorge Mujica, a Chicago-based member of the Mexican American coalition, told Global Post. “If police are encouraged to stop you for suspicion of being an illegal immigrant what does that mean? Are they going to stop you because you drive with a sombrero, or because you have a black moustache, or what?”

Officially called Support Our Law Enforcement and Safe Neighborhoods Act, SB1070 was approved in 2010 amid arguments that the federal government was failing to stop illegal immigrants flooding Arizona and other states.

Read more: A new answer to the drug war?

Its most controversial provision requires police officers to ask for papers of anyone who they suspect could be in the country without the correct documents — effectively making local police take the roles of immigration officers.

However, after the White House appealed against the law, federal courts ruled that the provision was unconstitutional as U.S. law clearly defines immigration as a federal issue.

If the Supreme Court — which is expected to rule on the case in the spring — upholds this decision, it would be a barrier to other anti-immigrant laws across the U.S.

But if the court were to rule in favor of Arizona’s legislation, it would be a crushing blow to migrant advocate groups and spark a heightened confrontation with Mexico over the issue.

“It is good that the Supreme Court is looking at this issue. But if we lose that could have very grave consequences,” Mujica said.

Other provisions of SB1070 levy criminal charges against people who assist illegal immigrants or offer them work. Arizona has also tightened access to state services for undocumented migrants.

The Mexican government did not immediately offer a reaction about the Supreme Court’s decision to wade into the case.

Many Mexican politicians have been backing a boycott against Arizona over the law, urging tourists not to spend money in the state, or musicians and athletes to play there.

The Mexican government had also issued a travel advisory warning that “it must be assumed that every Mexican citizen may be harassed and questioned without cause at any time.”

Many migrants have left Arizona because of the measures, hitting agriculture and other businesses.

“There has been a very bad atmosphere for migrants in Arizona and this has made many who are not very established there get up and leave to other parts of the United States,” Mujica said.

The Arizona law prompted similar legislation in South Carolina, Alabama and Utah, where the Supreme Court decision will also be watched closely.

In Alabama, a German executive working for Mercedes-Benz and a Japanese employee working for Honda, both of whom were legally in the country, were charged under the state's new, stricter immigration laws.

When the Arizona law was approved in 2010, Mexicans railed against it from church pulpits to the stages of rock concerts.

"Nobody can stand with their arms crossed in the face of decisions that clearly effect our countrymen,” President Felipe Calderon said then. “In this case, legislation is moving forward that opens the door to unacceptable racial discrimination."

Prominent journalist and TV presenter Ricardo Rocha went further, saying the law “is just like the German Nazi laws that make Jews scared to go out on the streets. We have to smash their business agreements in the nose. We have to declare war on Arizona.”

There are an estimated 12 million undocumented migrants in the United States, about half of who are Mexican.