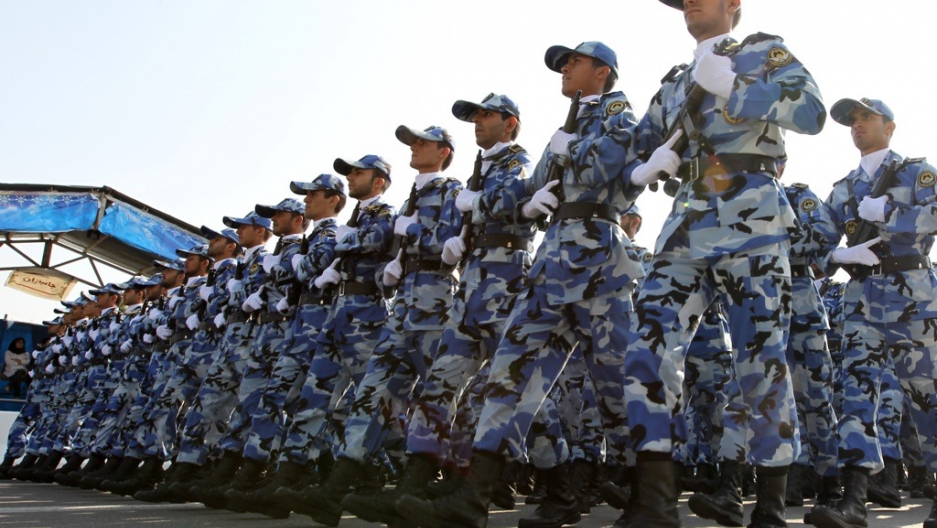 Iranian soldiers march during an annual military parade which marks the Iran war with Iraq, in the capital Tehran on Sept. 22, 2011.
Credit: Atta Kenare
Share

JERUSALEM — An explosion at a steel production complex in the central Iranian city of Yazd on Monday has intensified rumors that Iran is at war.

The undeclared, semi-covert campaign against Iran appears to have started several years ago, analysts say, and in recent weeks has included the massive blast on Nov. 28 that demolished significant parts of the city of Isfahan, the location of a uranium conversion site.

Two weeks earlier, at least 17 soldiers were killed in an explosion at a military base storing missiles in a suburb of Tehran. General Hassan Tehrani Moqaddam, a key figure in Iran's missile program, was also killed in the blast.

“It is not a theory. The war is at its apex, and it didn’t start yesterday. It’s been going on since 2007, if not earlier,” Yossi Melman, the intelligence and military affairs correspondent for the Israeli daily Ha’aretz and the author of numerous books on Israeli intelligence, told GlobalPost.

More from GlobalPost: The top 10 ways the US tries to subvert Iran

“It started with the mysterious death of Ardeshin Hassanpour, an Iranian scientist, which the Iranians attributed to a gas leak from a radiator. And it continues. The Stuxnet virus was two years ago, and I think it took at least two or three years to develop. So this war has been going on for years.”

Stuxnet was a 2009 computer virus that attacked systems running centrifuges at Iranian nuclear facilities. Though never claimed or even formally identified, it has been widely attributed to the United Sates and Israel.

Ronen Bergman, senior political and military analyst for the daily Yedioth Acharonoth and the author of the book, “The Secret War with Iran” said that the war is one of the longest in the Middle East and has been taking place almost since the 1979 establishment of the Iranian Republic.

“Most of it is taking place under the public radar and yet like any other, it’s a war that claims its victims,” he said.

“We are witnessing an ongoing eruption of this war. You just have to look at the unexplained incidents of sabotage and the mysterious bombings in Iran, to see this. And more recently, the stolen drone taken by the Iranians, the recent bombings in Lebanon and the increasingly strident level of statements on both sides.”

Among scholars of Iran there appears to be a growing consensus that everything but an explicit declaration of war between the West and Iran is already underway. Still, Melman said, it is unclear whether the Iranian regime is in fact actively pursuing a nuclear military option or if the military program as a program has become part and parcel of its own self-perpetuation.

“It doesn’t seem to me they have decided if they want nuclear weapons or not. The North Koreans managed to achieve a nuclear weapon in seven or eight years. The Iranians have been at this for over 20. They are very cautious. Their strategy appears to be first to pursue a nuclear program, and then cross the bridge of weapons-building when they get there.”

“Also, you’ve got to ask yourself how they would develop the weaponry, it’s not an obvious thing. They have Dakota planes from the first World War and 40-year-old American aircraft," he joked. "Even if they had a bomb, they are very far from being able to put it on a plane.”

Meanwhile, many Western powers are investing significant resources to spy on Iran and attempt to assess its nuclear intentions, which was made clear when 10 nations independently confirmed the findings of the International Atomic Energy Agency report on Iran's nuclear project released last month. In addition, the recently downed American drone showed the magnitude of the West's attempt to come to terms with what is going on in Iran.

“You have to keep in mind that war is a huge iceberg. We are barely seeing the tip of what is going on. Most of it is taking place under sea level. This is a hidden war right now at full force and we are only witnesses to very, very small parts of it,” Bergmen said.

Iranian media have reported that the American drone was felled by the hacking of its systems. But Meir Javedanfar, a professor for contemporary Iranian politics at the Inter Disciplinary Center Herzliya, said that Iran seems to be more concerned about the political campaign being waged against it, which has included widespread economic sanctions and other policies aimed at its isolation.

“Isolation can severely impact its economy. The nuclear program is a means to an end, which is the survival of the Islamic Republic, and that can survive only if the economy survives,” he said.

Melman ascribes much of the current frenzy to an ongoing psychological war and to “ongoing paranoia” on the part of Iran’s leaders. In 2007, for example, Iranian authorities detained 14 squirrels they believed were Mossad agents carrying embedded chips.

“This kind of thing shows you they are in hysteria and panicking,” he said. “They see in every squirrel an enemy, not just in people. Residents of Teheran think that war is about to break out any second. Someone is creating these rumors, and it is also a part of war. Internet, Facebook, radio, any cab driver tells you something.”

“Taking a step back and looking more broadly, the conflict between Iran, US and American allies, which dates back to 1979, then there is absolutely no question that we have entered a new phase,” said Alex Vatanka, an Iran specialist at Washington’s Middle East Institute. “I say this based on statements that I’m hearing come out of Teheran. Iranian senior officials say that they are preparing themselves for war. The rhetoric is far more intense than what I have heard previously.”

More from GlobalPost: Iran is probably building nuclear weapons. So what now?

“It appears the west is trying to sabotage and create havoc and fear within the regime without actually launching a conventional military confrontation. The facts on the ground point to that.”

Several scholars said the recent flurry of news articles presaging an Israeli air force attack against Iran is, in Melman’s words, “part of the stupidity of the media, or of their need to grab headlines.”

“I don’t think there will ever be an Israeli attack on Iran. It wouldn’t achieve anything. Everyone knows this,” he said.