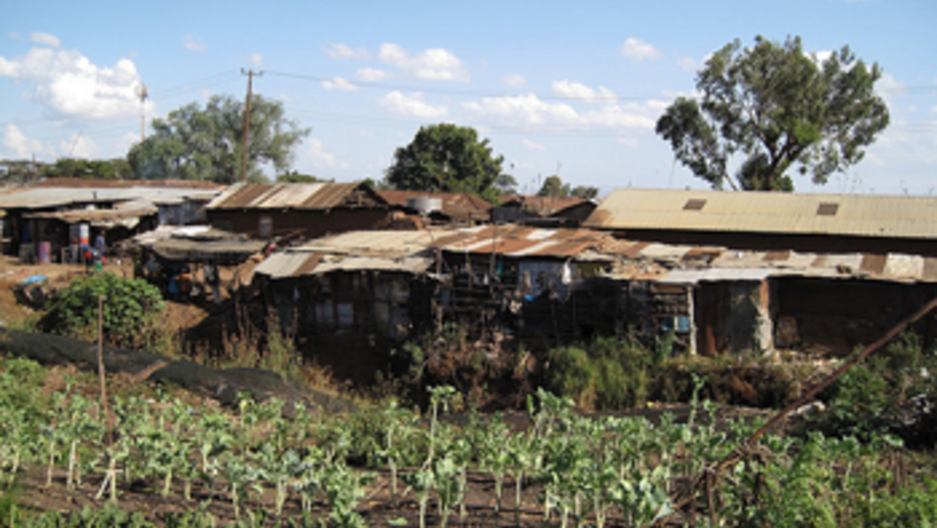 Farmers use any open available open space to grow their crops. (Photo from the BBC World Service.)

Nairobi, the capital of Kenya, is a bustling business city, but it’s also on the bleeding edge of climate change.

Rainfall disruptions and drought have led to a mass migration from rural areas of the country to the city. About 60 percent of the population now live in slums.

Hell on Earth is how some people, like journalist Jocelyn Zuckerman, describe it. But others see an opportunity. An opportunity for a form of urban agriculture called vertical farming.

"Most of the buildings are made of just sort of scraps of cardboard or mud - corrugated tin roofs on top of each other ... and laundry hanging all over open sewage that you have to step over and around," Zuckerman said after visiting a shantytown named Kibera. "But there’s also lots of little stores and barbershops and butchers and bakeries."

A recent study found that 20 percent of people in Kibera said they'd gone a day and night without food in the last couple of months.

"Poor people around the world - especially in cities where they don’t have access to land to grow their own food - generally spend from 75 to 80 percent of their incomes just on food," she said.

And more poor people are being forced to cities, especially in Kenya as the Saharan desert expands south because of climate change. Some 15 million people move into cities in sub-Saharan Africa each year, Zuckerman said.

"The dry periods are longer, and the rains are coming at times when they’re not expecting them," she said. "They’re also tending to be more extreme - a lot of rain - and when a lot of rain falls on the land that’s been dry for so long, it can’t absorb it. So, they’re finding it much more difficult to farm."

But those who move into cities are finding a way to hook into their agricultural roots.

"They’re doing some of it in what they call vertical gardens, which are just recycled grain sacks. It’s about three feet tall and a diameter of probably a foot and a half," she explained.

According to Zuckerman, the grain sacks are filled with rocks and dirt, then they plant kale in the bag. Kale is perfect because it grows quickly and is cheap to buy.

"It’s pretty much the staple that Kenyans rely on. And so they’re growing that and scallions and cabbage in these vertical gardens," Zuckerman said.

Zuckerman said she saw one home with 35 of the vertical gardens setup, though most homes have just one or two. The biggest problem is water. About 100 people share a single tap, to get water for cooking and bathing.

To get water for gardening, they're using wastewater.

"It’s that or nothing. These people are living in real desperation, and they’re finding ways around it," Zuckerman said.

Farmers like Francis Wachira were the pioneers of this vertical farming.

"people made fun of him because there’s a lot of stigma attached to what people do in cities and what people are meant to do in the countryside. And, he stuck with it. And now he’s got a pretty good-sized farm. He’s growing all sorts of vegetables and fruits," Zuckerman said.

Wachira has about a quarter acre of land, where he's raising fruits, vegetables and even 500 rabbits.

People like Wachira are going to be integral to the future, if the world is going to be able to feed it's growing population, Zuckerman said.

"The soils in Africa in particular are so tired, they’re just not growing crops well. So people are needing to figure out other ways to do it," she said.