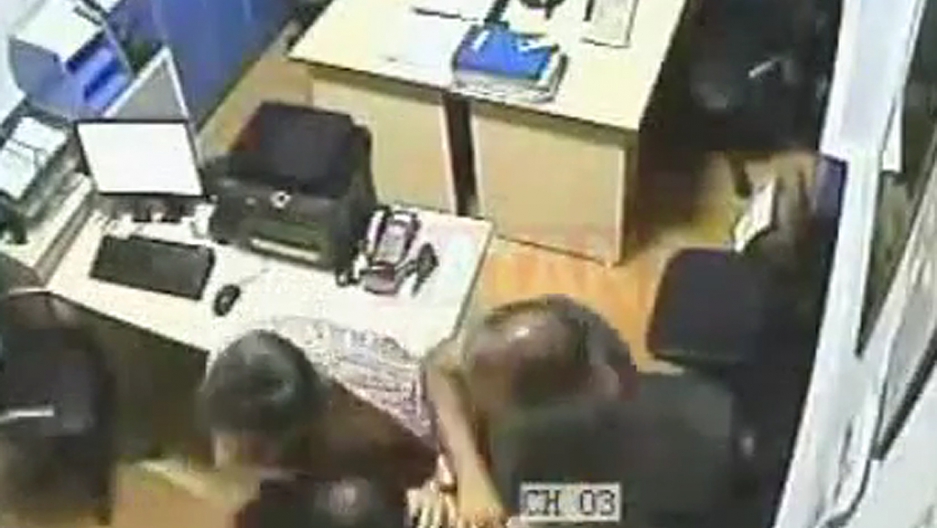 A screen grab from a video recorded in July 2011 in a police station in Turkey. The video shows plainclothes Turkish police officers slapping and beating a female detainee.
Share

A video that shows policemen in Turkey abusing a female detainee surfaced in local media this weekend, sparking outrage and prompting calls for swift punishment of the officers involved.

Fevziye Cengiz, a 37-year-old Turkish woman, was reportedly detained by police in July during “a raid on a music hall”, according to the English-language Today’s Zaman newspaper.

Cengiz can be seen in the video - which was released on YouTube - handcuffed and beaten by three plainclothes police officers.

Cengiz also said that she was sexually harassed, according to Today’s Zaman.

At least one high-ranking government official has called for the police officers to be punished.

“The incident is unacceptable, and I believe those who are involved in this must be punished,” said Fatma Sahin, Turkey’s minister of Family and Social Policies, according to Today’s Zaman:

“If those in particular who are supposed to help efforts for a solution [to the problem of violence against women] become part of the problem, this is definitely unacceptable,” the minister said, according to the paper.

More from GlobalPost: Turkey vs. Syria

The video showed a heated argument in an office between two plain-clothed police officers and Fevziye Cengiz, a woman who had been arrested and brought to a police station in the western Turkish port city of Izmir last July.

Cengiz, who was dressed in shorts and a tank-top, yelled and backed away from the men. Suddenly, the officers started slapping Cengiz and yanking her hair. Later, the camera showed them wrestling Cengiz to the ground as a third man in police uniform occasionally stepped in to help restrain the woman and pick fallen items off the floor.

After handcuffing Cengiz, the plain-clothed officers held her against a wall and took turns delivering open-handed blows to her face.

Here’s Today’s Zaman on what could happen next:

After Cengiz was released, she filed a complaint at the prosecutor's office. The officers then filed a separate complaint against her, accusing her of attacking and insulting them. The police officers face up to one-and-a-half years in jail each for causing simple injury, while Cengiz can receive up to six-and-a-half years for attacking and insulting police officers.