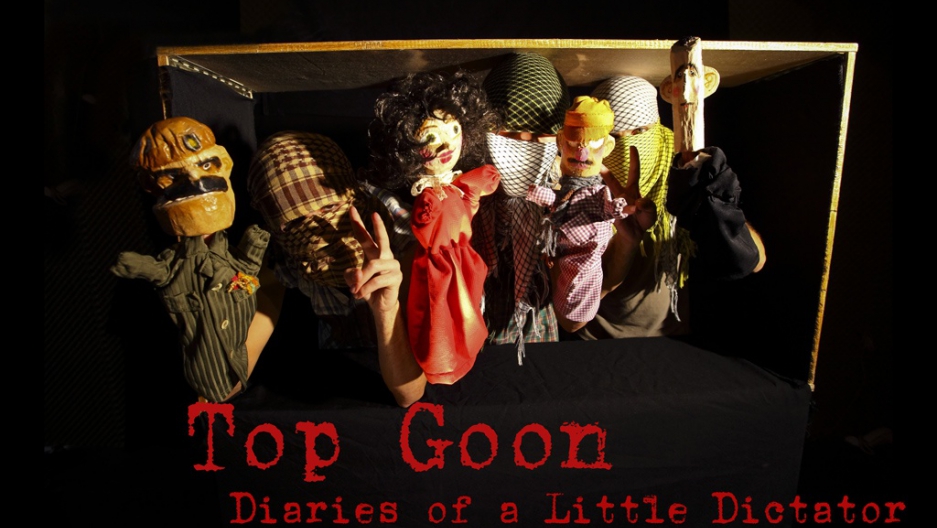 Some of the puppet characters featured in "Top Goon: Diaries of a Little Dictator." Syrian President Bashar al-Assad is on the right.
Credit: Masasit Mati
Share

BEIRUT, Lebanon — The whip cracks against the prisoner’s back as the man with the moustache and the military uniform repeats his accusation: “You want freedom, right? Freedom?”

The whip comes down again and the prisoner punches the wall in pain.

“What kind of freedom is it you want?” demands the torturer. The freedom the puppet protester seeks, he tells his torturer, is “one where you and I wouldn’t be here. You’d be with your kids and I’d be with my family.”

And then a reply that explains why this small scene from a series of dramatic vignettes played out by finger puppets is among the boldest works of art to have grown out of the unprecedented upheaval in Syrian society.

More from GlobalPost: Homs arms itself against a looming onslaught

“You bastard!” retorts the man from Assad’s security services. “I am here because of you.” But the protester has understood the paradox: “You are here because you are not free,” he says. “You are imprisoned just like me. I’ll leave prison in a month or two. But you’ll stay here. Because you are afraid to take your freedom.”

Since its launch on YouTube two weeks ago, the series, "Top Goon: Diaries of a Little Dictator," has received more than 40,000 views and garnered lavish praise and occasional furious outbursts from audiences stunned by its unprecedented and very personal lampooning of Syria’s struggling president, Bashar al-Assad. And, importantly for the country’s increasingly polarized society, by its refusal to indulge in easy answers.

In a Syria divided between regime and opposition, between mainly Sunni Muslim protesters and the Allawite Shiite Muslims who dominate Assad’s security services, between aggressor and victim, the perspective presented in this upcoming episode of Syrian theater group Masasit Mati’s groundbreaking drama is a rejection of black and white views.

The shabih, or pro-Assad thug, is seen not simply as the oppressor — though he most clearly is that — but also as another kind of victim of the regime, while the protester, though enduring a whipping, is by no means simply a victim, but rather a figure of strength, as he says, “a free Syrian who refuses humiliation.”

“The idea for this dialogue came from a real life example,” Jamil, Masasit Mati’s director told GlobalPost, which was shown a preview of the seventh episode of the series, due for release on Sunday.

“But it was actually the other way around: A friend of ours was in prison and heard the interrogator telling a prisoner, ‘Why are you doing this to us? You are forcing us to stay here. You are imprisoning us.’ We wanted to say that even the shabiha are brought up like slaves to serve the regime.”

A collaboration between a group of 10 artists from inside Syria and named after the straw used to drink mati, a herbal tea popular among Syrians who sip it over lengthy conversation, Jamil said the aim of Top Goon’s finger puppets was to bolster audiences in the best tradition of black comedy, even as blood continues to be spilled in the regime’s unrelenting crackdown on pro-democracy protesters.

“Comedy strips things bare and gives you the strength to fight. Of course, with black comedy the laughter gets stuck in your throat. It makes you laugh and cry at same time,” Jamil said. “But we will not allow the regime to turn us into victims that just cry and stay at home all the time.”

The emergence of Masasit Mati’s series comes amid a critical stage in what the International Crisis Group aptly describes as Syria’s “slow motion revolution,” by far the most drawn out of this year’s Arab uprisings.

The United Nations now estimates at least 4,000 Syrians have been killed since the crackdown began in mid-March, but human rights group Avaaz, which has researchers inside Syria, says it has registered more than 6,500 killed, with at least 20,000 arrested or disappeared, including last week a high profile 30-year-old female blogger, Razan Ghazzawi.

In a report released last month, Human Rights Watch said the regime’s crackdown against civilians in the central city of Homs, including systematic torture, constitutes crimes against humanity.

Last week Avaaz reported the kidnap of 14 Sunnis, including six women, in Homs as they traveled by bus near an Allawite neighborhood, with a senior Western diplomat in Damascus warning a sectarian war in the city is already underway.

Finding ways to make its largely Syrian audience laugh amid all the bloodshed and violence is no mean feat, but Masasit Mati has tapped a rich vein of satire in its portrayal of Syria’s president.

More from GlobalPost: Stalwarts of the Arab Spring give Occupy Wall Street some advice

Bashar, or Beeshu — a kind of baby name he is known by in the series — swings wildly between the character of a child suffering attention deficit disorder and the spoiled autocrat in his nightcap, comforted to sleep by his most trusted thug, in the episode Bishou’s Nightmares.

“The regime has fallen,” cries Beeshu, waking from his nightmare as his shabih opens fire on unseen opponents. “Shabih you moron!” screams Syria’s dictator. “It was only in my dream!”

Later Beeshu is seen flying into a rage on a game show, Who Wants to Kill a Million?, angered that his assertion of crushing the protesters is not the right final answer. Later his son and daughter challenge him over the killing of Syrian children and he responds by calling on his goon to put down this domestic uprising.

“We only kill our own people, but on the Golan Heights [Syrian territory occupied by Israel] we are a peaceful army,” Beeshu assures his audience during the episode, Talk Show, modelled on a famous talk show on Al Jazeera.

The direct and confrontational story lines, seeking to expose the lies by which the Assad regime has depicted its 41-year dictatorship as the choice of the Syrian people and a sacrifice in the name of Palestinian freedom from Israeli occupation, has won Masasit Mati rave reviews.

“It’s so good it’s driving me crazy,” posted one fan on the group’s Facebook wall. “I want to see a Masasit Mati TV station.” “It’s very good work and we watch it with our kids,” posted another, adding irreverently: “All we want to know is which finger you put Bashar on.”

Not everybody has greeted the series with such acclaim, however. Among the outpourings of praise, a few viewers have taken deep offense and posted threats that are unpublishable but tend to center on sexual violence against the mothers and sisters of Masasit Mati’s members.

“It’s kind of obvious it comes from the security apparatus,” said Jamil, who uses a pseudonym and did not wish to reveal his whereabouts.

The threat to the safety of those who would ridicule Syria’s president in words or pictures is all too serious. In July, a man identified as Ibrahim Kashoush was found with his throat slit in Hama after leading carnival-like street songs ridiculing the president.

A month later masked gunmen attacked Syria’s best known political cartoonist days after he published a cartoon showing Assad hitching a lift out of town with Libyan dictator Muammar Gaddafi. The attackers fractured Farzat’s arm, left him with a black eye and symbolically broke two of his fingers.

In the Top Goon series, the voice of Bishou mimics the president’s lisping pronunciation of the letter S and shows the president giggling inappropriately and telling bad jokes while delivering rambling speeches on reforms, such as the Law of Gravity that he says will put an end to the so-called ‘flying protests’ — spontaneous and short demonstrations by the opposition.

The series got an unexpected boost last week with the broadcast of an interview with Assad on US network ABC in which the president denied all responsibility for the killing of protesters, telling ABC’s Barbara Walters that Syria’s security forces “are not my forces,” despite, as president, he is constitutionally sitting as commander of all Syria’s armed forces.

"We don't kill our people,” Assad said. “No government in the world kills its people, unless it's led by a crazy person. Most of the people that have been killed are supporters of the government.”

“We used to worry that people outside Syria might think the things we show in Top Goon are exaggerated,” Jamil said. “But after we saw Assad’s interview we decided to run it on its own as episode five and a half because the interview was more comic than we could have imagined. We didn’t even have to make something up.”