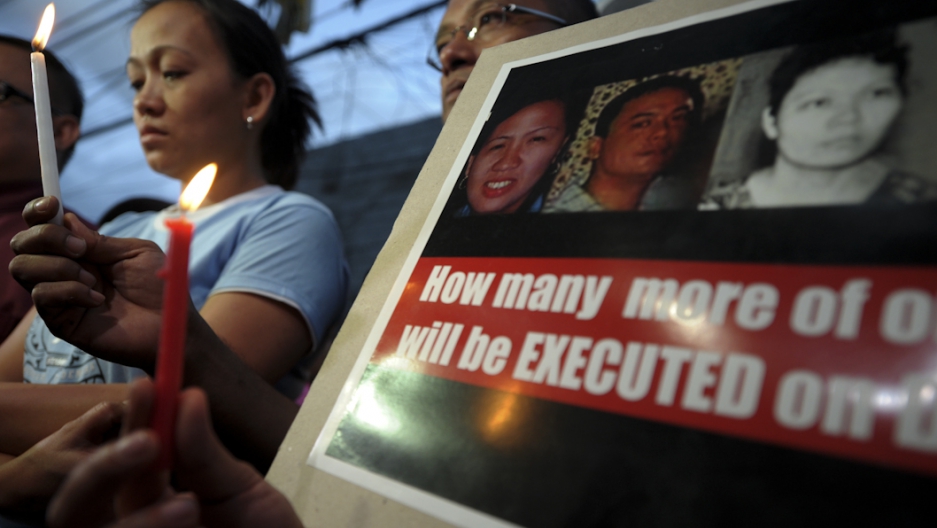 Mirasol Delfinado (L), sister of Sally Villanueva, one of three Filipinos executed in China after being convicted of drug trafficking offences, with supporters holds candles and placards outside their family home in Manila on March 30, 2011. The executions came after repeated pleas by the Philippine government for their sentences to be commuted were turned down, and ended vigils in Manila where supporters of the trio had prayed for a miracle.
Credit: NOEL CELIS
Share

Janice Bronwyn Linden, 38, from KwaZulu-Natal, was executed by lethal injection Monday, more than three years after being arrested for drug smuggling.

Linden was found guilty of possessing 3 kg of crystal methamphetamine upon arrival at Guangzhou airport. She said the drugs had been planted in her suitcase, but the Guangdong High Court and the Supreme Court in Beijing rejected her appeals.

According to South African media reports, Linden was only told of her execution a few hours before she died, which is the usual practice of the Chinese government.

The TV channel eNews said two of Linden's sisters were allowed to spend an hour with her before she was executed.

South Africa's government, which has a close trade and political relationship with Beijing, said the execution of Linden would not affect diplomatic ties.

Clayson Monyela, spokesman for South Africa's Department of International Relations and Cooperation, told the BBC that President Zuma had intervened in Linden's case.

"All the necessary interventions were done at every possible level, even the highest ones," Monyela said.

But a spokesman for South Africa's opposition Democratic Alliance (DA) party, which had called on Zuma to make the appeal, said the government had not done enough.

"There has been little evidence of this commitment in our dealings with China of late."

China executes thousands of people every year by lethal injection and firing squad, more than any other country, according to Amnesty International. The exact number of executions is not known.