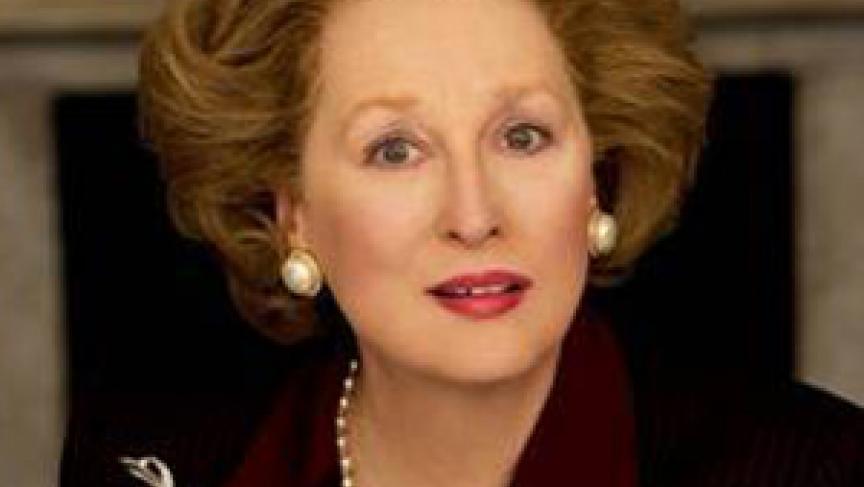 Share
In just a few days, former British Prime Minister Margaret Thatcher will be coming to theater near you in the guise of move inspired by her life. "The Iron Lady" stars Meryl Streep. The film has already stirred considerable debate in Britain where Thatcher and her legacy remain controversial. Margaret Thatcher's rise to power in the macho world of British politics seems a perfect fit for the silver screen and an admitted challenge for Meryl Streep. Streep, mastering yet another accent, steps into Lady Thatcher's pumps, dons her pearls and takes on the critics. Streep has admitted she was not a fan of Thatcher during her time in power. The actor says taking on the role gave her a chance to challenge her own prejudices "I wanted to capture whatever it was that drew people to her and whatever it was that made people just have a special venom for her as a public figure," Streep said in an interview with the BBC. Streep may have been talking about the past, but the fact is, more than two decades after Thatcher left office, she still sparks strong feelings among the British. "I don't think she was a woman I would have ever wanted to meet," said Liz Hoggard, a columnist and as a self described left wing feminist who is no fan of the former Prime Minister. So Hoggard was more than a little surprised to receive a very special invitation a few weeks ago. "It was the dinner party of the year, I'll never stop talking about it," Hoggard said. "It was incredible. We all got this email saying would you like to come to see an early screening of "The Iron Lady" and then have a private supper with Meryl Streep? Twitter just went crazy as the women that were invited compared notes." Hoggard said it was a clever idea to gather together some of the country's best known female journalists, show them the film and then subject them to Streep's charm and even her home made baking. Hoggard said Streep baked her guests an "American apple cake." It may have been enough to win them over to the actor and her performance, but Hoggard said most of them — lifelong critics of Thatcher — were not about to change their views. "And around that table there were some very strong left wing political voices who loved her portrayal who found the film fascinating but who were fundamentally worried or dissatisfied by it because they felt it was going to end up in complete Thatcher worship." Richard Vinen of King's College in London has chronicled the history of Britain under Thatcher. Vinen was quick to list what she would consider her policy successes such as breaking the power of unions, privatizing government enterprises and deregulating the financial sector. He argues it is a legacy that her successors on the other side of the aisle — Labor party's Tony Blair and Gordon Brown — embraced. But Vinen says there was a social cost to Thatcher's rule. "Britain does become a more divided society under Thatcher. There it is relevant to talk about very long term legacies," Vinen said. That division played into what Vinen called an outright hatred of Thatcher. "And sometimes hatred for her has replaced any serious reflection. So it's almost like she has become a voodoo doll a kind of fetish that the left can use they can say I'm still left wing because I hate Mrs. Thatcher without having to do anything that is actually left wing," he said. The movie does not just portray Thatcher in her prime, it also shows her in the grip of dementia, as she holds conversations with her long-dead husband. Those scenes have upset her supporters. But columnist Liz Hoggard, who never spared much sympathy for Thatcher before, was moved to admire a woman who broke through so many barriers. "I brushed away a tear let's put it that way," Hoggard said. If the film toys with the British psyche, if it tears the bandages off the old wounds from the Thatcher era, it may be at least partly because Britain's only female prime minister herself was never one for sentimentality. Just recently, her personal secretary told an interviewer that Thatcher always loved being called The Iron Lady. At Waterloo station in London, commuters waiting for their trains had quick heartfelt reactions to the mere sound of her name. What is the first word or phrase that comes to mind when I say the name Margaret Thatcher? Strong character, really very strong character. Loathsome. Hated, hated everything about her political philosophy. It was my era and she was brilliant, absolutely. If we had another woman prime minister like her I think we'd be put on the right road. What is the first word or phrase that comes to mind when I say her name Margaret Thatcher. That awful woman, yeah that awful woman. It's not often in my lifetime that you've had a nasty vindictive person as a head of government. Respect, commanding, dominance but with respect. Did a good job.