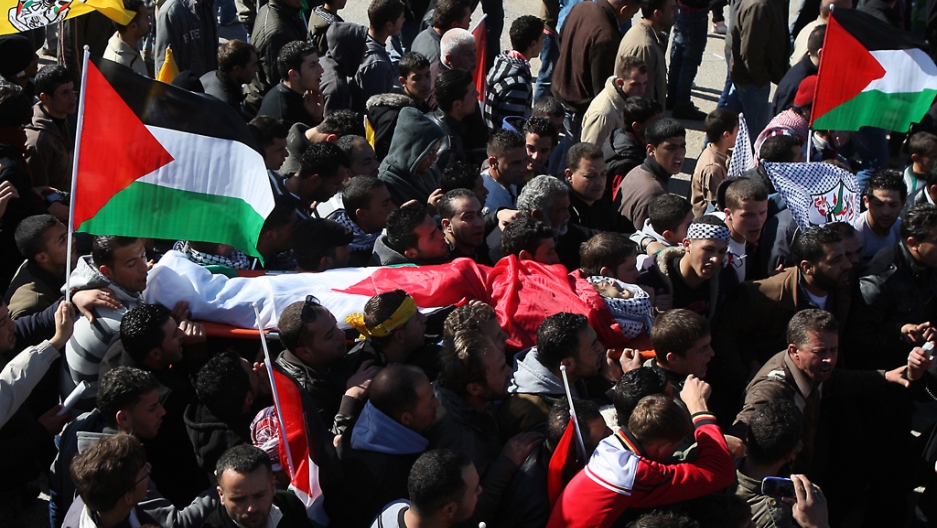 Mourners carry the body of Palestinian activist Mustafa al-Tamimi during his funeral in the West Bank village of Nabi Saleh on December 11, 2011.
Credit: ABBAS MOMANI
Share

The Israeli army has promised to investigate the death of Mustafa Tamimi, the Palestinian activist who was hit in the face by a tear gas canister on Friday during a protest in the West Bank village of Al Nabi Saleh, the BBC reported.

More on GlobalPost: Get to the damn peace table, Panetta tells Israel

Israel Defense Forces officials described the incident – in which a canister was fired at close range by a soldier from inside a patrol jeep – as "exceptional," Haaretz reported.

It is understood that Tamimi, 28, had been among a small group of Palestinians throwing stones at Israeli military vehicles.

He was rushed to Belinson Hospital, near Tel Aviv, but died on Saturday morning.

More on GlobalPost: Women's rights in Israel under assault

Thousands attended Tamimi's funeral on Sunday in Al Nabi Saleh, where there were further clashes between Palestinians and Israeli soldiers, the Associated Press reported.

Mourners threw stones at the troops, who responded with clouds of tear gas.

Family member Mohammad Tamimi, a member of the Popular Resistance Committee in Al Nabi Saleh, told Gulf News that the family intended to sue the Israeli army over Tamimi's death.

"Once the family and committee are done with the funeral rituals and condolence sessions, we will approach the Red Cross, the human rights organizations and international legal institutions to join forces and will sue the Israeli forces for the premeditated murder of Mustafa."

The Israeli rights group B'tselem said Tamimi was the 20th person to be killed in West Bank demonstrations, which are against the construction of Jewish settlements, over the past eight years.


Mustafa Tamimi Killed by the Israeli Army on 9... par Tali99