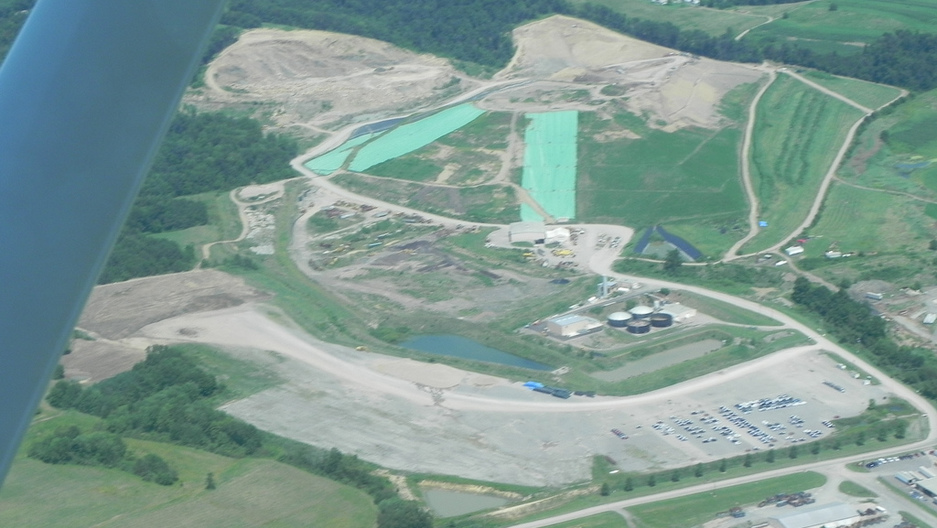 A mine in western Pennsylvania is depicted from the air in this photo. Pennsylvania and its Marcellus Shale is ground zero for the fracking effort. (Photo from Flickr user Marcellus Protest, cc-by-sa.)

The U.S. Environmental Protection Agency has, for the first time, confirmed what critics of fracking, a controversial natural gas drilling practice, have long suspected: fracking can contaminate drinking water supplies.

The EPA's decision came after extensive testing of water wells in Wyoming where this practice has been widespread. Fracking involves injecting chemicals, sand and water into natural gas mines in an effort to force the gas out of the ground.

Abrahm Lustgarten, a reporter for the non-profit, non-partisan investigative journalism site Pro Publica, said this investigation has been underway for three years and was precipitated by a complaint from residents — much like the complaints they've received from others near fracked wells.

"They tested water wells in a total of 42 homes and found varying degrees of pretty serious contamination that could or could not match the drilling industry, but certainly didn't rule it out," Lustgarten said. "They did rule out other factors like agricultural pollution."

Lustgarten said that after those early findings, the EPA dug two deep, monitoring wells and found worse pollution at great depths than was even found in personal wells and among the contaminants were at least 10 substances that match the chemicals and additives used in the fracking process.

"The EPA concluded the most likely cause of that pollution was hydraulic fracking," he said.

For years, the industry has tried to separate problems with wells from the oil and gas industry. They argue that fracking doesn't cause the problems, but that the wells are improperly built.

But the EPA found that the concrete lining of the wells was degrading in a pronounced way in areas close to the fracture zones.

But the finding isn't enough to say fracking should be banned entirely. Lustgarten said that with different geological formations in each state, it's hard to draw conclusions about what fracking in New York might do, for example, based on what happens in Wyoming.

But there are important lessons here about drilling risks, Lustgarten said.

It will probably impact the thinking at the EPA and the drive for legislation in Washington, D.C., but it's hard to know if this will influence the drive for fracking more broadly.