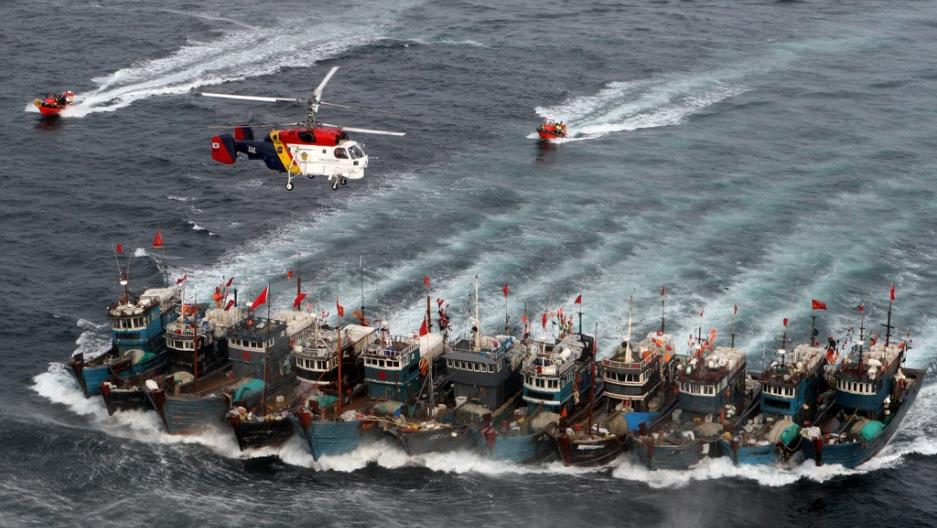 A picture taken on November 16, 2011 from a South Korean helicopter shows Chinese boats banded together with ropes, chased by a coastguard helicopter and rubber boats pacted with commandoes, after alleged illegal fishing in South Korean waters in the Yellow Sea.
Credit: Dong-A-Ilbo
Share

The captain of a Chinese boat fatally stabbed a South Korean coast guard officer and wounded another on Monday, the Associated Press reported.

More on GlobalPost: Is the Chinese Navy targeting foreign vessels in the South China Sea? (VIDEO)

Officials said the vessel had been stopped for illegal fishing in the Yellow Sea, off South Korea's Incheon port.

"The captain of the boat who was in the steering house stabbed two of our coast guard officers with an unidentified weapon."

Reports from the local media said the captain was wielding shards of glass from a broken window.

It is understood that of the two South Korean officers stabbed, one died in hospital after being airlifted from the boat, while the other, who was stabbed in the abdomen, is to undergo surgery.

Nine Chinese crewmen were detained, and the boat was seized by authorities.

South Korea has lodged a “strong protest” with China over the incident, which is the first deadly encounter between the South Korean coast guard and Chinese fishermen in three years, the AP reported.

More on GlobalPost: A clash between Asia's giants

A spokesman from the Chinese foreign ministry said Beijing was willing to work closely with the South Koreans, the BBC reported.

According to the coast guard, so far this year an estimated 430 Chinese ships have been seized for illegal fishing in the Yellow Sea. That's an increase from 370 vessels last year.