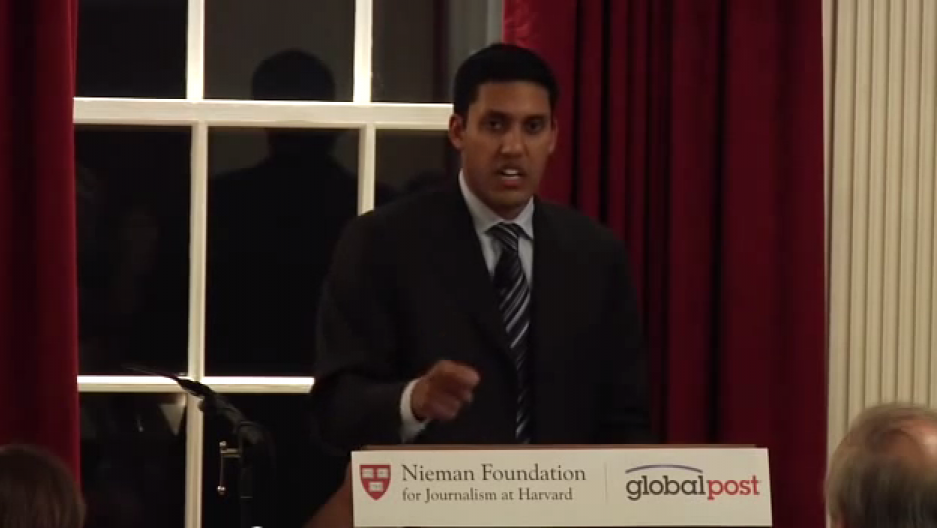 CAMBRIDGE, Mass– It was in Dadaab, Kenya, that Dr. Rajiv Shah, Administrator of USAID, came face to face with an unforgettable and haunting image that captures the enormity of the challenges the agency faces every day in helping the poorest and most disenfranchised people on earth.

It was the face of a mother, a bone-thin Somali fleeing drought who walked from her home to a refugee camp in Dadaab, carrying her remaining belongings and her two children. She was abused and sexually assaulted.

"She reached a point where she had to make an unimaginable decision," Shah said. "She could no longer carry both of her children."

And, as Shah explained, she had to make a choice to save only one, leaving the other behind.

“I still can’t process that,” said Shah, a father of three and at age 38 is the youngest administrator of the agency in its history.

He was welling with emotion as he told this story to a gathering of journalists and experts on global health at a forum sponsored by GlobalPost, the Kaiser Family Foundation and Harvard University’s Nieman Foundation for Journalism. For Shah, the decision this mother had to make was a most poignant reminder of what USAID could do and should do as the largest foreign-assistance program in the United States.

“That just stays with you,” he told the audience at Harvard University’s Loeb House at a dinner and reporting workshop titled “Healing the World: Policymakers and journalists discuss global health challenges.”

Journalists have a responsibility to cover important world issues and stories, urged Dr. Rajiv Shah, Administrator of USAID, while speaking at an event at Harvard University on Thursday evening.

"We and the community of people who fight for global health, and child survival have to do a better job of linking this story to others around the world. Being able to tell this story is something that frankly those of us who have been working for a while in global health don't do nearly as well as we should."

"We need your help," said Shah. "As journalists, you understand the potential for great success. I do hope that you will write aggressively and often about this issue, every chance you get."

Shah was sworn in as Administrator of USAID in Dec 31, 2009 and managed the US government responses to the 2010 earthquake in Haiti.

The event was a culmination of a reporting series by GlobalPost ‘Special Report” titled “Healing the World,” and supported through a partnership funded in part by the Kaiser Family Foundation, which provides funding for journalism about global-health issues.

Obama pledged to expand the focus of the US government from a disease-centered approach focusing on HIV/AIDS, tuberculosis and malaria to an integrated approach that would incorporate other critical global health challenges including maternal and infant mortality and neglected tropical diseases.

Now that Congress and the Obama Administration have entered a prolonged period of budget cuts, foreign assistance stands to lose billions of dollars each year.

Analysts predict that GHI will most likely only received a third of the funding originally pledged.

"I find it surprising that given everything else that we do at USAID, from supporting elections in Tunisia, to sanitation, to support in Haiti after a natural disaster, which costs less than 1 percent of the national budget, we are in the midst of this [funding] debate," said Shah, who repeatedly urged the importance of foreign assistance in the context of US security.

The need for the US to increase foreign assistance has never been greater.

Annual funding for HIV/AIDS programs worldwide fell to $15 billion in 2010 from $15.9 billion in 2009. UNAIDS estimates that $22-24 billion is needed annually by 2015 to pay for a comprehensive, effective global response.

"This fight isn't over," Obama said on World AIDS Day, December 1st. He pledged to increase access to antiretrovirals in hardest-hit countries by the end of 2013, and pledged to reduce the number of children dying from AIDS dramatically—five million children by 2015.

GlobalPost launched an in-depth series investigating the Global Health Initiative in May of 2011, looking at both the behind-the-scenes decisions in the Obama Administration, as well as the on-the-ground reality of GHI. It provided a human face to the global health and aid challenges faced by the US government, and brought to life some of the policy decisions made by GHI and USAID, all while asking the question "Is it working?"