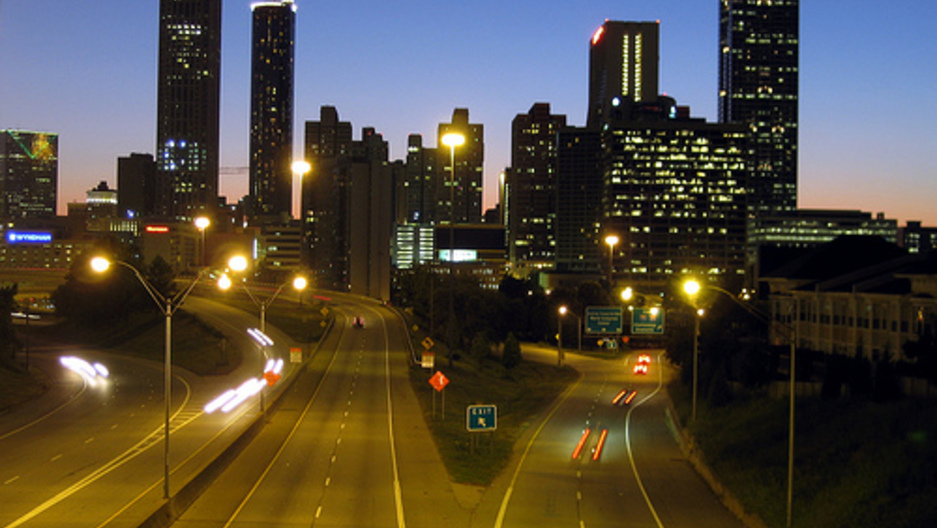 Atlanta, pictured, is one of the cities that has seen a large migration in of Black Americans from northern cities. (Photo by Flickr user k1ng, cc-by-sa.)

Census data from 2010 revealed an interesting trend in racial migrations in America.

Many Black Americans who moved north to cities like New York, Detroit and Chicago to find work and move away from prejudices, are reversing that trend and returning to the cities of their grandparents, like Atlanta or even Kansas City.

A recent analysis by Brown University showed that an inadvertent side effect of this southern migration is actually desegregation. Many suburban neighborhoods, like Overland Park, an affluent suburb of Kansas City, is increasingly diverse, USA Today found.

Kansas City in general is experiencing two sides of the black migration. Many of its inner city areas are hollowing out as Blacks flee impoverished and often violent neighborhoods, for suburban neighborhoods. But Kansas City is also experiencing an increase in the number of Black americans as people from northern metropolises head there to find work.

"It's as much the fact that city ghettos are being broken up as the fact that suburbs are beginning to integrate," Kansas City native John Logan, a Brown University sociologist who did the analysis, said to USA Today. "It's one of the places that I would describe as a success in the making, after a long history of intense segregation."

Isabel Wilkerson, a Pulitzer Prize-winning journalist and author of the "Warmth of Other Suns: The Epic Story of America's Great Migration," said that this reverse migration is really due in part to the original trek north.

"Because of their departure, the South ultimately changed and has become a more welcoming place for people off all backgrounds," she said. "Of course, African-Americans being Americans, have followed the same trends toward Sun Belt cities and toward the American Dream."

Wilkerson said the beauty of this migration is that, somehow, people know it's the time to move out.

"There are too many of us concentrated in this one place and we need to spread out. That's what's happening here. Because people are returning to places where their ancestors have been traditionally identified, it's not seen as that," she said.

One distinction with this migration from previous ones in American history, however, is that before, when Blacks and Hispanics moved to predominantly White area, White Americans moved away. But that's not happening.

"What you're (seeing) is a newer generation of White Americans who are finding the cities their parents and grandparents fled have the cultural advantages they've been looking for," Wilkerson said.

Wilkerson said children and grandchildren of those who led the earlier migrations are choosing a different route, and that can only be for the good. They're being more open about people and places they want to leave in and near.

There are potential down sides, however. For example, Wilkerson said, the Black vote will be more easily dilluted in these new places.

"The old cultural centers and historic neighborhoods that had come into being almost because they had to, those neighborhoods are now gentrifying and changing," Wilkerson said.