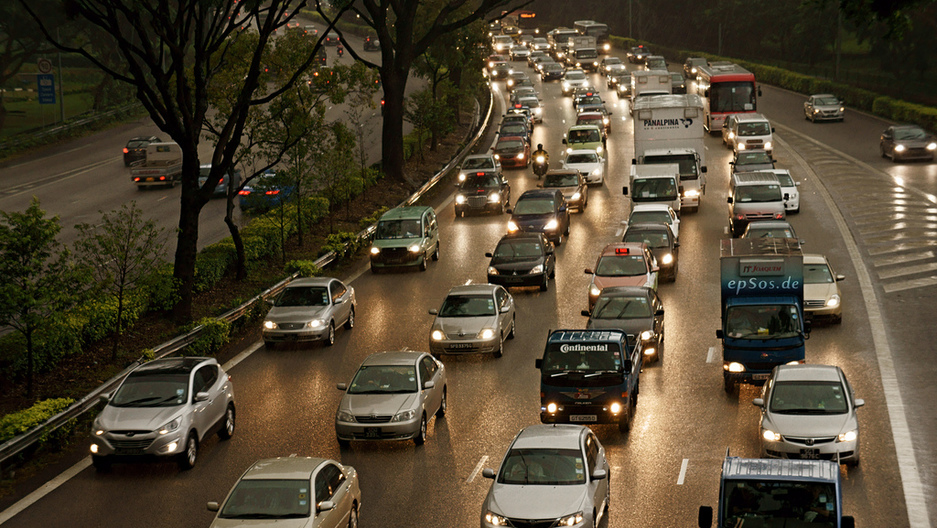 Motorists sit in traffic in this photo from Singapore earlier this year. (Photo by Flickr user epSos.de, cc-by-sa.)

Tiny carbon particles commonly found in car and truck exhaust have long been suspected of playing a role in heart disease, cancer, and respiratory illnesses.

But an increasing number of studies are linking vehicle exhaust to other serious health problems.

In a California study, children born to mothers living within 1,000 feet of a major road were twice as likely to have autism.

A long-term Columbia University study found that the air pregnant women breathed could leave a bio-chemical mark on their babies’ DNA. Babies with the highest pre-natal exposure had higher rates of physical and emotional problems as they grew up.

Another study linked exposure to traffic pollutants with increased risk of Alzheimer's and faster progression of Parkinson's disease.

"There are a number of laboratories across the United States that have been examining the effects of these on the elderly, where they appear to cause emotional problems, cognition problems, learning and memories problems," said Wall Street Journal science correspondent Robert Lee Hotz. "These cognitive effects added five years to a person's mental age."

For instance, in New Jersey, premature births to women living near highway toll passes decreased almost 11 percent after the introduction of the E-Z Pass system, which reduced congestion and fumes. Hotz also said New York City’s Times Square is an example of how small changes can impact pollution levels.

“By simply changing the pattern of streets, reducing the traffic so there were fewer traffic jams, the general air pollution levels there dropped 63 percent,” Holtz said.