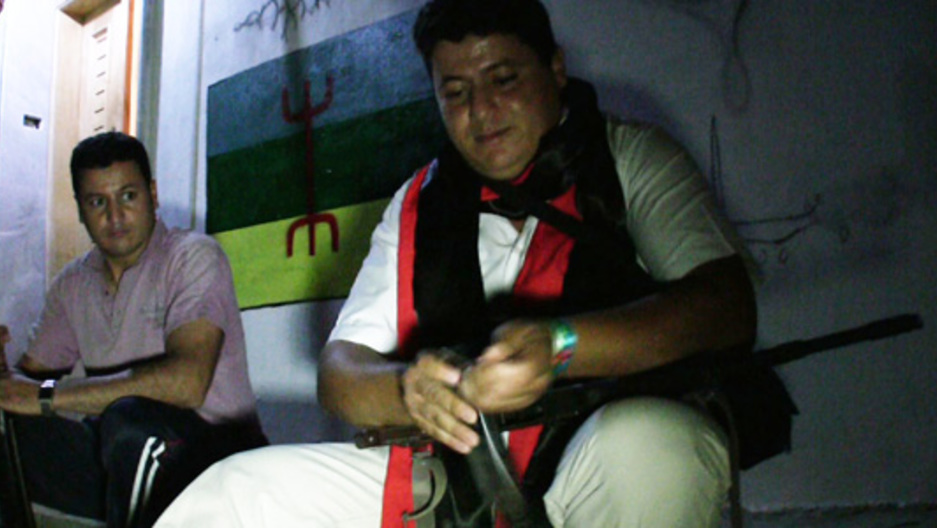 Ahmad Suleiman, left, and his friend clean their guns in the Gorgi neighbourhood of Tripoli. (Photo: Don Duncan)

Share
By Don Duncan In Libya, the widely held view is that country has solved its biggest problem — a dictatorship. But now that Moammar Gaddafi has been deposed and killed, many other problems are revealing themselves and threatening Libya's peaceful transition to democracy. The opposition is splintering with militias that once fought side by side now sparring with each other. Individuals with scores to settle are doing so. And the problem is that it's all being done by the gun. After a civil war that saw arms being places in many citizens' hands, the challenge for the new Libyan government is to disarm the population. It's not proving so easy. Months after the toppling of Libyan dictator Moammar Gaddafi, ecstatic Libyans still descend nightly on Tripoli's Martyr's Square. Fireworks explode overhead, children take rides on anti-aircraft guns, and vendors sell revolution trinkets and comic photo-shopped images of the fallen dictator. "Thank God, Moammar is dead and there is no more trace of his awful family in this country," a man said in Martyr's square. While Libyans celebrate the fight that led to the end of Gadaffi, the guns used to oust him are a worrying sign for the future. Thousands of Guns Hundreds of thousands of guns were handed out to anti-Gaddafi fighters. With tribal conflicts and personal score-settling on the rise, these same guns are quickly becoming public enemy number one in post-revolution Libya. Brigade Captain Abed al-Majid heads up one of the numerous task forces created to get guns out of civilian hands. Tonight, he's set up a checkpoint on a busy Tripoli street to inspect motorists for illegal guns. "We have to confiscate those guns and interrogate their owners a little to see where they got them, what they will do with them and why they haven't given them up," al-Majid said. Some people do have government-issued gun permits, but most do not. There are two main reasons people won't give up their weapons. Some say that Libya is just not secure enough yet to remain unarmed. Others, mostly former fighters, refuse to give up their guns as a matter of principal rather than pragmatism. Ahmed Suleiman and some friends show me an arsenal they've stashed in Suleiman's home. As they clean the guns, Suleiman explains that after what they sacrificed to defeat Gaddafi, being asked to disarm is a slap in the face. "Disarming us shouldn't be done," Suleiman said. "We were prepared to die to save others and now the Government is treating us as if there is no difference between us and regular citizens. We should get to keep our guns. Suleiman says Libya is not stable enough for total disarmament — many armed Gadaffi loyalists remain, and must be fought if they rise up. What's more, the problem goes beyond rifles and handguns. Heavy Artillery In this Tripoli warehouse, run by the National Transitional Council, or NTC, the larger scale of the problem is apparent. It houses confiscated heavy artillery- rocket propelled grenades, landmines, and even two Scud missiles. The weaponry here is likely just the tip of the iceberg. Because of the heavy weapons — and the possibility they might be sold to the more unsavory elements in the region — lots of countries are helping the NTC with the big guns. But for smaller weapons, the NTC and its various member groups are on their own. "Our staff is going around neighborhoods, talking about this, educating people regarding guns and the dangers of having guns at home and all this stuff so it's working. It's working," said Jamal Faraj, who heads up the Tripoli Revolutionary Council's gun control team. Faraj and his team have collected over a thousand arms — AK-47s and handguns mostly — in just a recent two week period. But even still, all this is a drop in the ocean at this point. Meanwhile, back at al-Majid's barracks, there is a party, celebrating a bust of an arms cache belonging to Gaddafi loyalists. "Gaddafi is dead and the old era of Gaddafi is over and it's a new future we have now in Libya," said a man at an al-Majid celebration. "It's a new era and what's more, we've created it with our own hands." While al-Majid says he understands the fears driving people to keep their weapons, he is determined to overcome the gun problem, one bust at a time.