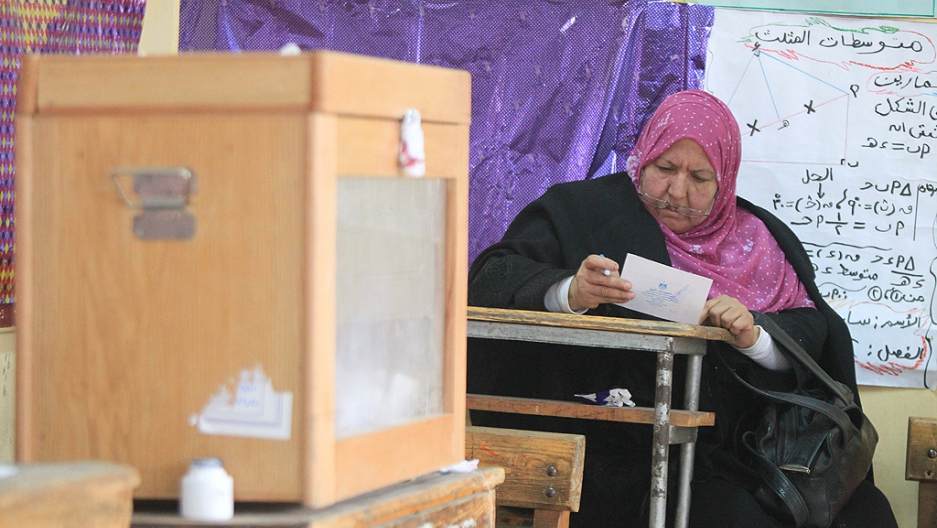 An Egyptian woman inspects her ballot during the vote on the second day of the run-off of the first round of voting at a polling station in Cairo on December 6, 2011.
Credit: KHALED DESOUKI
Share

Some Egyptian women have already voiced concerns about the potential for an Islamist-dominated parliament in Egypt, following big wins for the Muslim Brotherhood and ultraconservative Nour Party during the first round of voting last month.

But now, there’s a new worry - that no women will be represented in Egypt's parliament at all.

The results of the first round of parliamentary elections indicate that female representation will be minimal, if not nonexistent – a phenomenon experts and candidates attribute to cultural barriers.

Not a single woman earned a seat in parliament in the first round, nor did any female candidates contest the run-offs.

“It’s shocking that even after the revolution, this stereotype of women never changed. The domination of radical religious beliefs is widespread,” activist Dalia Ziada, who was eyeing a seat on Al-Adl Party’s list, told Daily News Egypt.

In the 2010 elections, which were marred by vote-rigging and fraud, a parliamentary quota gave Egyptian women 64 seats - roughly 12 percent of the legislature.  Watch the video below to learn more about that quota, which was repealed by Egypt's military rulers following the ouster of former president Hosni Mubarak in February.

The second round of voting for Egypt’s future parliament begins next week.