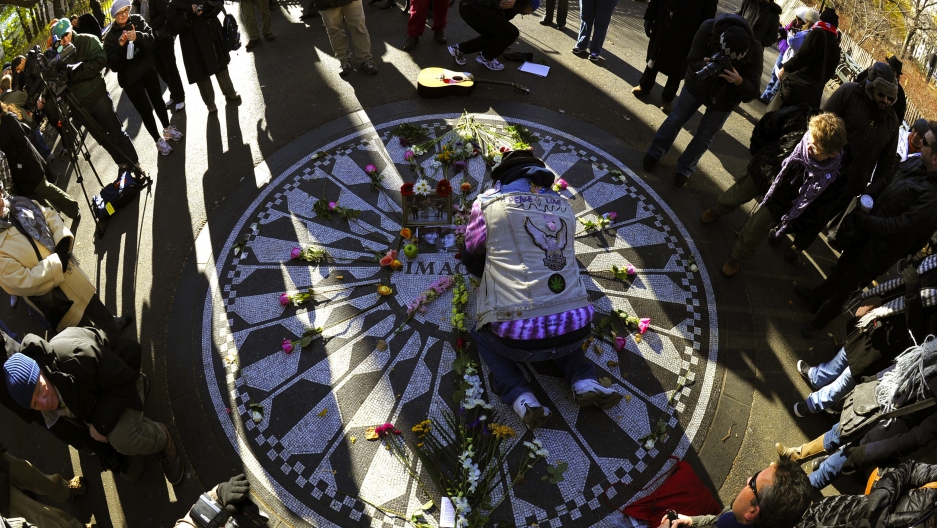 Fans gather at Strawberry Fields in Central Park, New York City, dedicated to the late Beatle. Lennon often visited this section of the park and was murdered across the street in front of his home at the Dakota building.
Credit: TIMOTHY A. CLARY
Share

On Dec. 8, 1980 the world of music was changed when former Beatle John Lennon was murdered in front of his home in New York City. Lennon, 40 at the time, was standing in the entrance of the Dakota building, his home, when Mark David Chapman fatally shot him in the back. Immediately following his death an outpouring of fans around the world gathered in candlelight vigils to mourn.

"Now that John's a spirit, he has a different effect on people than when he was alive," Lennon's widow Yoko Ono, 78, said to the Vancouver Sun on the 31st anniversary of her husband's death. "Spirits talk on a pure level and don't get distracted by people saying things like, 'That's nice, but why's he wearing that?'" she says in a slightly weary voice that betrays the midnight hour. "Of course, it would still be better if John was around."

Since that day 31 years ago, fans gather on Dec. 8 annually at Strawberry Fields in Central Park and at other memorial locations around the globe. Liverpool, the birthplace of Lennon and the Beatles, has an especially large memorial. Fans gather to light candles, sing Lennon and Beatles' songs and leave flowers at the memorial sites.

Ono told fans via Twitter to express themselves on the tribute page, Imagine Peace.