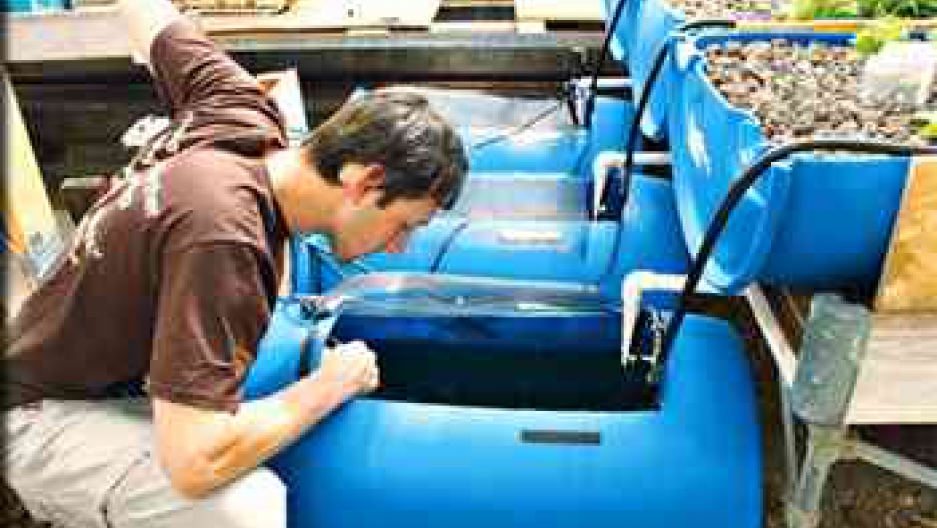 Michael Amadori checks on his fish. (Photo courtesy of the SUNY College of Environmental Science and Forestry.)

As the global appetite for fish grows, it's becoming harder for fish populations to keep up.

That's meant fish farming is increasingly important, and led to aquaponics, an effort to raise fish and grow plants together in a symbiotic system.

Some 40 percent of the food produced in the United States winds up as waste, so Michael Amadori, a graduate student at State University of New York in Syracuse, developed a plan to take that waste and turn it into an aquaponic farm's fish food.

"The cafeteria usually closes around 8 p.m., so I’ll go there right around 8:30," Amadori said. "What I’m getting a lot of times the left over meat off the grill is still warm."

In addition to meat, he may grab corn, beans, basically anything except dairy. It goes into a grinder and turns into a mush the consistency of play dough. It gets turned into spaghetti-like strands that are baked, dried and broken into bite-sized fish pellets.

He has six tanks with 19 tilapia fish in each, the centerpiece of his research project. Above them, is a 50 gallon drum, cut in half and filled with gravel, where the other part of the experiment, the plants, live.

"Aquaponics is the combination of aquaculture and hydroponics. You raise fish in your standard fish tank like people have at home," Amadori said. "But instead of using those commercial filters that clean the water, you pump the water up into a hydroponic grow bed which cleans the water just like the commercial filters, but you also get value added produce out of it."

Half of the fish are getting fed cafeteria waste, while the rest are getting a standard commercial fish food. It's corn-based, which means that food that could be directed for human consumption is going to fish first. He said it can't be sustained.

"We’ve pretty much outfished all of the main commercial fishes in the ocean, so what we’re doing now is we're harvesting their food," he said. "The smaller based fish that is feed for the haddock, feed for the tuna, feed for the salmon, we’re taking their feed and grinding it up just so we can grow fish in aquaculture setting."

There is a bit of a problem though. The fish love the commercial fish food, because it's been formulated through years of work to be precisely what they want to eat. The cafeteria food, not so much.

And Sylvia Bernstein, author of Aquaponic Gardening: a Step by Step Guide to Raising Vegetables and Fish Together, said there's another concern. The fish might not get the level of vitamins and nutrients they need from waste.

But Amadori said his analysis of the food made from waste indicates it's comparable in terms of protein, fat, carbs and minerals.

"In terms of their basic nutrient requirements, they're being met," he said.

Bernstein, however, would like to see the food fed to worms, which could then break the worms down into compost. And, on top of that, the worms could be fed to the fish.

"Worms are something that is excellent for the fish," she said.

Aquaponics is a very efficient system. In addition to growing his fish, Amadori is getting 18 heads of lettuce per week, and he's earning $54 a week on those. Plus, the system uses about one-tenth as much water as traditional farming.

"You can also grow tomatoes, cucumbers, just about any other crop you can grow in your garden - outside of root vegetables - you can grow in an aquaponic system," Amadori said.

Amadori has another four months to go on his year-long project, before turning his project into dinner.

"When I’m done, we’re going to be eating lots of fish tacos," Amadori said. "I’ve put in a year of hard work growing these fish in this system and I intend to eat them all and savor the flavor."