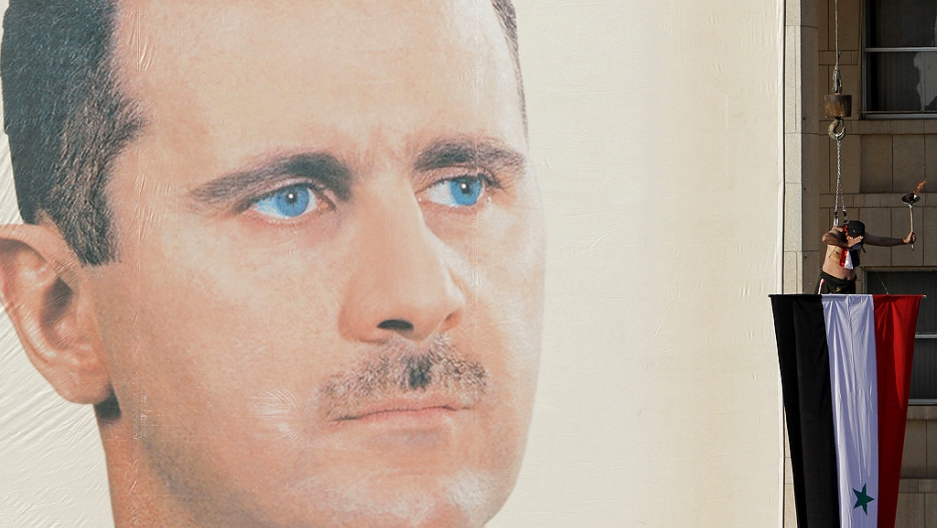 A Syrian performer hangs from hooks while holding his national flag in front of a giant picture of Syrian President Bashar al-Assad as a show of endurance during a pro-regime rally in Damascus on December 2, 2011. Europe and the United States tightened economic sanctions on Syria, ramping up international pressure as the UN said more than 4,000 people had died in a crackdown on dissidents.
Credit: LOUAI BESHARA
Share

Syrian president Bashar al-Assad denied ordering a crackdown on protesters in Syria, in his first video interview with an American journalist since the nation’s uprising began 9 months ago.

In a short excerpt of the interview, ABC’s Barbara Walters presented Assad with the names of several Syrians who were either killed or tortured - reportedly by regime forces - since March.

Walters also mentioned a United Nations report issued last week which said that 4,000 Syrians had been killed during the nation’s uprising.

"To be frank with you, Barbara, I don't believe you," Assad said defiantly.

Assad conceded only that some members of his armed forces went too far, but claims they were punished for their actions.

"Every 'brute reaction' was by an individual, not by an institution, that's what you have to know," he said. "There is a difference between having a policy to crackdown and between having some mistakes committed by some officials. There is a big difference," said Assad.

"But you have to give the order," countered Walters.

"We don't kill our people… no government in the world kills its people, unless it's led by a crazy person," Assad said.

Watch an excerpt of the interview below: