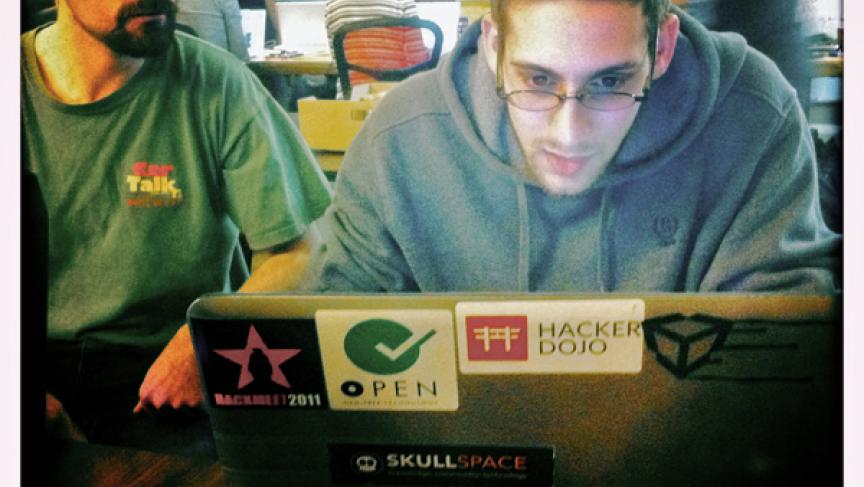 Share
Over the weekend, a number of so-called hack-a-thons–software-making marathons–took place around the world. They formed part of a movement called Random Hacks of Kindness, which gathers like-minded techies–self-proclaimed hackers for good–to collaborate and design crisis management programs that could be useful during disasters: disease outbreaks, tsunamis, and other calamities. Humanitarian hacking, if you will? Michael Karpeles, a 23-year-old techie in San Francisco, participated in the hack-a-thon. "Fifth grade is when I definitely got interested in programming," said Karpeles. "I started doing geeky summer programs." Last weekend, Karpeles took time off from his dot-com start-up to link up with 1,000 other techies–logged on in cities from Berlin to Bangalore–for a 48-hour software-making sprint. It's the fourth year of Random Hacks of Kindness events, a movement started by a small team of programmers from Google, Microsoft, NASA, and the World Bank. "There's something special about a hack-a-thon," said Karpeles. "It take it to the next level. It's an opportunity to take action." During the event, Karpeles also meets Robert Munro, a computational linguist at Stanford. Their talk is pretty geeky, focusing on algorithms, preprocessing stages, and how different computer languages can be used across borders. It's the stuff of Munro's project, which involves complex computation but is a pretty straightforward project in the end. Munro is building a new emergency response system for the Samoan Islands that quickly delivers emergency text and phone messages to rescue teams on the ground. The alerts could also be plotted on a Google map to pinpoint a trapped person's whereabouts. Rescuers used similar technology after the Haiti and Japan earthquakes. Now, Munro is further tuning the software–hacking it out–and testing it during a cyclone simulation in Samoa. "We simulated the lead up to the cyclone yesterday," Munro explained. "It hit overnight. We had a 12-hour blackout in communications. And now we're in the process of mapping and translating all the different emergency reports." Karpeles thinks it's a great idea. "I love this," he said. "It's a great way for people to get connected. And after something like this, a disaster, it's pretty imperative." As Munro and Karpeles chat, Dave Leng, who actually runs Somoa's emergency response network is on Skype following the software test, too. He said the hackers are offering him expertise and test-runs his small agency's budget could never afford. "There is software that does the type of things that we need it to do. To buy it, it's about $200,000," said Leng. And the overall pay-off could be huge. "The end result for us is about saving lives," said Leng. "So any way that we can do that more efficiently is going to be good." Other projects were equally ambitious. In Portland, developers created an application to allow medical workers to track disease outbreaks in real-time. In Bangalore, hackers built a job database for unskilled workers. In Montreal, developers created an app that can scan a microscopic photo of bacteria taken from water to test for drinking safety–a key tool for poorer countries. Munro said that, sure, while these projects help others, he also gets something out of it, too. "The majority of people who study computational linguistics go on to work, you know, at the search engines. They'll spend their career making a search engine five percent more accurate," Munro said. "Whereas in one weekend, I can apply the same technology and create a more robust emergency response system for an entire nation." And that's not a bad two day's work.