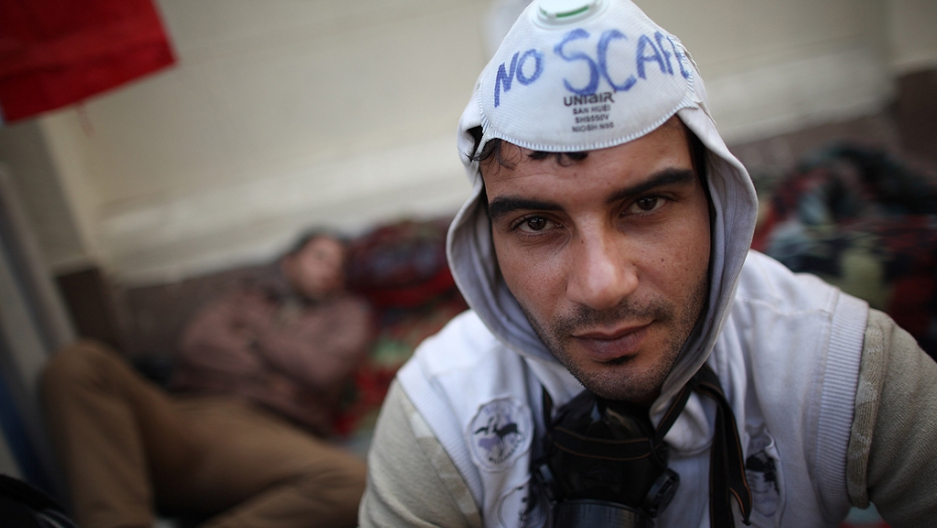 A protestor takes part in a sit-in outside the cabinet office with 'No Scaf' written on his face mask which refers to the Supreme Council of Armed Forces on November 26, 2011 in Cairo, Egypt.
Credit: Peter Macdiarmid
Share

Ganzouri said on Tuesday that "the new national government will be the salvation government of the January 28 revolution," according to CNN.

The new cabinet, however, has not satisfied all of Egypt’s protesters.

Dozens of anti-government demonstrators reportedly moved Wednesday from Tahrir Square to a street outside Egypt’s cabinet building, hoping to block the new prime minister from entering.

Many Egyptian activists view Ganzouri as too old and too close of an ally to the nation’s military leadership and deposed dictator.

Critics believe that Egypt’s Supreme Council of the Armed Forces (SCAF) is reluctant to transfer power to a civilian government, despite repeated pledges by the army to transition the country to democracy following the ouster of former president Hosni Mubarak.

A spokesman for the military told reporters on Wednesday that Egypt’s military would oversee the drafting of the nation’s next constitution, curbing some of the powers of the country’s future parliament.

"The parliament is not representing all sectors of society," said Gen. Mukhtar Mulla, a member of the ruling military council that took power when Mubarak was ousted in a popular uprising. He said the constitution must be representative of all of Egypt, and not just of the parliamentary majority.

"We are in the early stages of democracy," he said. "This is not out of mistrust of the parliament. What we are seeing is free and fair elections ... but it certainly doesn't represent all sectors of society."

On Wednesday, the military also announced that Ganzouri’s authority had been expanded to include executive powers over everything except oversight of the military and judiciary.

Giving "these so-called presidential powers to an 80-year-old prime minister and former member of Mubarak's NDP party do not mean anything to us," Shaath said. "He was chosen by the Supreme Council with no political base from Tahrir. When we demanded a national salvation government, we wanted a representative from the revolutionaries, not a puppet that serves the goals of the military who do not have right to choose him anyway."

One Egyptian blogger took the puppet allegation to a more literal - and comic - level.  Watch the video below.