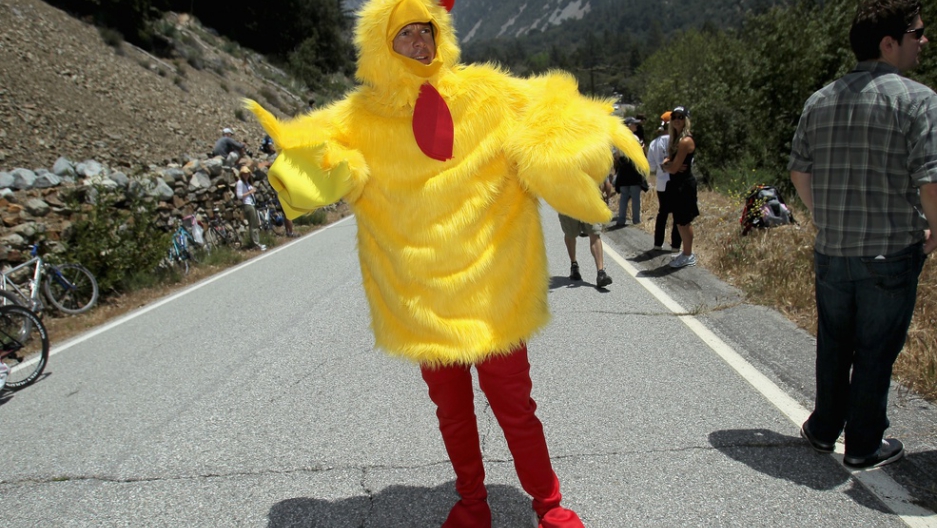 Sun TV once had an intern dress like a chicken to mock a CBC ally, government minister James Moore.
Credit: Doug Pensinger
Share

TORONTO, Canada — It’s a dark time for the Canadian Broadcasting Corporation, often referred to — and not always fondly — as the “Mother Corp.”

Created in large part to ward off U.S. dominance of Canadian airwaves, the CBC is a coast-to-coast television, radio and online behemoth with a reputation for first-rate journalism and mediocre entertainment.

But now, as it enters its 76th year, it faces a perfect storm: sagging TV ratings, a hostile government in power, and an upstart competitor, dubbed Fox News North, that’s clearly intent on drawing blood.

That competitor, Sun TV, first aired in April and aspires to replicate in Canada what Fox did in the US: influence the news cycle, tilting the public conversation — and the country — to the right.

The mighty, taxpayer-funded CBC is first and foremost among its targets. Its hosts and pundits repeatedly refer to it as the “state broadcaster,” a dark allusion to the power wielded by official media in authoritarian states.

And that’s if they’re being subtle.

“Pro-Taliban,” “pro-terrorist,” “PR agency for terrorism,” “mooches,” “a national disgrace,” “crazy,” “radical,” “liars,” and “off-the-hook partisan,” are just some of the words and phrases used to describe the CBC by Ezra Levant, Sun TV’s brightest star and resident pitbull.

Levant’s rants generally lack the unhinged theatrics of a Glen Beck, but not always. To mark Earth Day, he donned a hardhat and lumberjack shirt and took a chainsaw to a potted plant.

The shrillness is new, but the criticism isn’t.

For years, Canada’s right, including many members of the governing Conservative party, have accused the CBC of liberal bias and of being a drain on the public purse. They have called for everything from sweeping cuts to its $1.1 billion a year subsidy, to the curtailing of its broad mandate, to its outright elimination.

That drumbeat has only grown louder since Prime Minister Stephen Harper finally achieved a majority government earlier this year, after two successive minorities.

Harper’s victory may help explain why Sun TV is having an impact disproportionate to its evidently-tiny ratings, and its disadvantageous perch in the nosebleed section of the cable dial.

But it’s not the entire story.

“This is about money, it’s about eyeballs, it’s about advertising dollars,” said John Doyle, longtime television critic for the Globe and Mail newspaper.

Sun TV is owned by Quebecor, a vast media conglomerate with publishing and broadcast interests across Canada that include a chain of major-city tabloids and TVA, which the company describes as “the largest private French-language broadcaster in North America.”

TVA’s only serious rival is the CBC, known in Quebec as Radio Canada.

At stake is a hefty sum: about $600 million a year in TV advertising revenue, almost 20 percent of the Canadian market.

But it’s a base that’s been shrinking since the global financial meltdown of 2008.  Amid continuing economic gloom and the fracturing of audiences accelerated by the digital revolution, it shows few signs of recovery.

In the third quarter of this year, Quebecor’s profits dropped 35 percent, mostly on weak broadcasting and print ad revenues.

It’s this backdrop that many observers say explains the intensity of the attacks on the CBC, led by Sun TV but amplified by Quebecor’s other properties, in particular its national Sun chain of newpapers, where Levant and others do double-duty as columnists.

A spokesman for Quebecor declined a request for an interview.

“All traditional media organizations are frantic to stay relevant and to stay alive fiscally, now that the old business model has collapsed and a new way to generate revenues ... hasn’t yet been found,” says Donna Logan, a former senior executive with the CBC and founding director of the University of British Columbia’s Graduate School of Journalism.

“CBC has the advantage of a huge government grant to cushion this transition, so it’s not surprising that the private sector is crying foul.”

It’s how the CBC spends this yearly subsidy — Sun TV’s Levant calls it a “bailout” — that’s been the subject of an avalanche of access-to-information requests filed by Quebecor’s journalists.

They want to know everything from the salaries for the CBC’s top English and French news anchors, to how it awards outside contracts, to what it spends on marketing, including the celebrations last month of its 75th anniversary.

In one particularly cringe-worthy episode, Levant zeroed in on the CBC’s refusal to reveal the cost of a lavish party it threw during the Toronto International Film Festival in September.

Hosted by George Stroumboulopoulos — otherwise known as "Strombo," with a late-night talk show aimed at a younger, hipper demographic — the party was a glittering affair held in one of Toronto’s most exclusive hotels.

Late last month, the CBC finally admitted the party cost $64,000, but the damage was done. Levant took great delight in playing a clip of an evidently under-the-influence Strombo explaining the rationale for the taxpayer-funded bash.

Less amusing but far more potentially damaging are the workings of a parliamentary committee, dominated by the Conservative party, and apparently hell-bent on forcing the CBC to release the information demanded by Quebecor.

The CBC had consistently refused, arguing that its journalistic and programming activities are specifically exempt from Canada’s access to information legislation, and that the requests represent a naked attempt by a rival to undermine its position in the market.

Last month a federal court disagreed, and ordered the CBC to hand over the documents to the government’s information commissioner.

Not lost on observers is the fact that the committee is headed by Conservative MP Dean Del Mastro, who also serves as parliamentary secretary to Prime Minister Harper and who, last fall, publicly mused that “maybe it’s time we get out of the broadcasting business.”

That would be no small task. The CBC has a presence in all major and most medium-sized markets in the country.

Its radio arm is commercial-free and features a wealth of local and national programming, much of it unique and often excellent. In Toronto, Canada’s largest market, the CBC’s morning radio show consistently tops the ratings.

Television, however, is another story.

For one thing, it carries advertisements. But while Canada’s private English-language networks can fill up their schedules with ready-made American series — "Big Bang Theory" on the CTV network is the highest-rated show in Canada — the CBC, in keeping with its mandate as a national broadcaster, has to create the bulk of its own programming.

These programs have tended to mimic American genres, drama and reality shows in particular. But they often lack the slickness of their U.S. counterparts and the marketing budgets to compete.

Too often, the results are poor ratings, ammunition for critics both inside and outside government.

To be fair, the CBC has at least one powerful friend in power, Heritage Minister James Moore, whose department is responsible for Canadian broadcasting and who, prior to the last election, promised to at least maintain the CBC’s current budget.

That earned Moore the ire of Sun TV, which once had an intern dressed like a chicken substitute for him in an interview after he refused an invitation to appear.

More recently, however, Moore and others in government have made it clear they expect the CBC to trim its budget in line with general austerity measures. When asked recently to confirm reports of a $100 million cut, Moore dodged the question, but didn’t deny it.