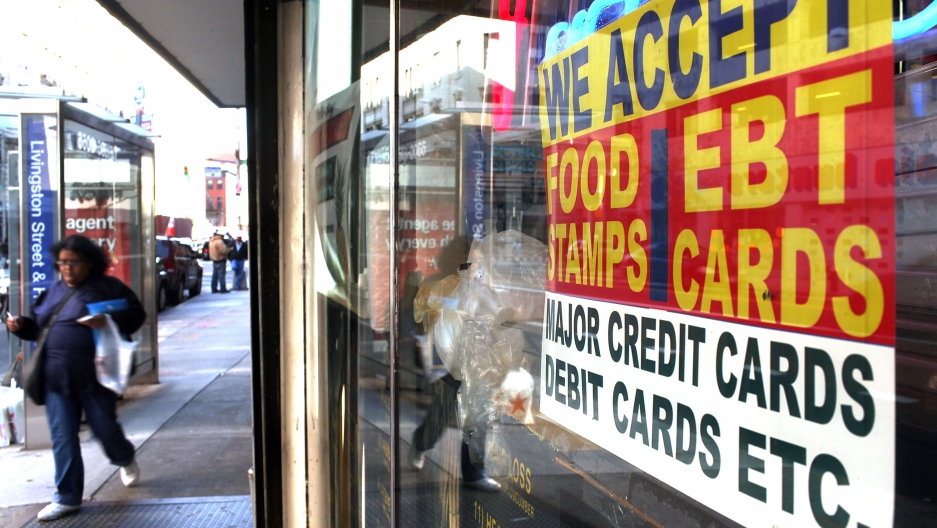 A sign in a market window advertises the acceptance of food stamps on October 7, 2010 in New York City. In Texas, a mother barricaded herself in a state welfare office for seven hours before shooting her two children and killing herself after being denied food stamps for months.
Credit: Spencer Platt
Share

A Texas mother who barricaded herself in a state welfare office for seven hours before shooting her two children and killing herself had reportedly been denied food stamps for months.

The children, a 10-year-old boy and a 12-year-old girl, remained in critical condition at a San Antonio hospital on Tuesday, the LA Times reported, quoting Joe Baeza, a Laredo Police Department investigator.

The mother was identified as Rachelle Grimmer, 38, and children Ramie and Timothy, The Associated Press reported.

Baeza reportedly said that they had recently moved to the border city from Zanesville, Ohio, about 30 miles east of Columbus.

Grimmer's first application for food stamps in July was denied because she didn't turn in enough information, the AP quoted Texas Department of Health and Human Services spokeswoman Stephanie Goodman as saying.

Goodman said it wasn't immediately clear what information the mother was missing.

"We were still waiting, and if we had that, I don't know if she would still qualify or not," Goodman said.

According to a 2010 report by Fox News, Texas' food stamp program ranked nearly the worst in the country.

The report said the state food assistance program was so backed up 40,000 applications were past due.

That's 40,000 families who turned in applications more than a month ago and they are still waiting for a response.

Many families were turning to food pantries, which could only provide families about $40 worth of food per month, the report said.

Tuesday's siege began when Grimmer entered the Texas Department of Health and Human Services building in Laredo and began talking to two employees, before pulling out a handgun and demanded to see a supervisor.

The supervisor persuaded the woman to let the two other employees go in exchange for him staying. After two hours of negotiating with police, Grimmer reportedly let the supervisor go then continued negotiating, "frequently hanging up on police," the LA Times reported.

About 11:45 p.m., police heard three shots. A SWAT team entered the office and found the woman and her two wounded children, Baeza said.

About 25 people were reportedly inside the building at the time