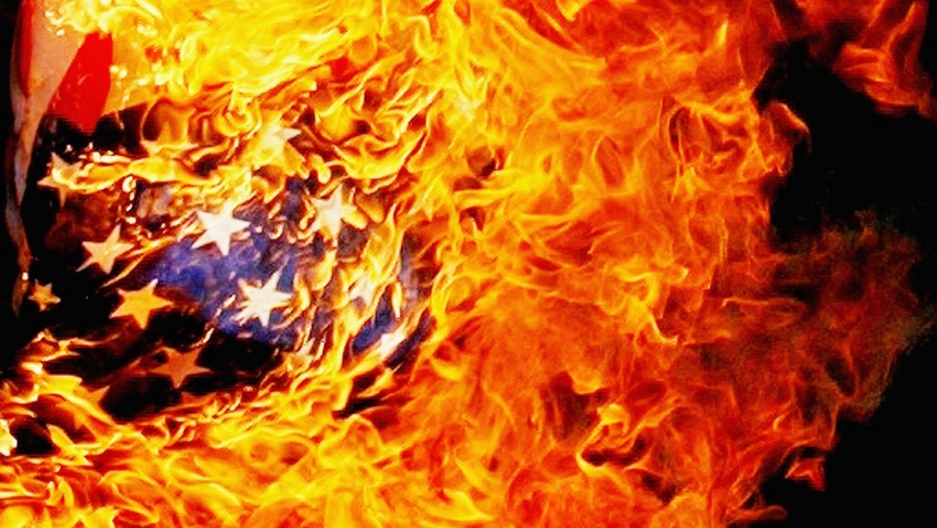 A US flag burned by angry Palestinian protesters in April 2004 in the Gaza Strip. Although the US is often the brunt of protests, its passport is coveted by millions of desperate and stateless people. Mike Gogulski, who renounced his citizenship in protest, is not one of them.
Credit: Adib Katib
Share

BRATISLAVA, Slovakia — The world seems to think Mike Gogulski is crazy. People on his blog have told him so. He suspects his own mother in the US thinks he’s nuts.

The 39-year-old freelance translator, who has at various times called himself a radical libertarian or anarchist, was an American until 2008. Now he’s stateless. On purpose. And happy about it.

“I like it this way,” Gogulski says while sipping a beer at the Café Laguna on a busy Bratislava street corner. “It’s really not bad at all.”

Many have burned their passports as a form of political protest. But Gogulski is one of only two Americans known to be ballsy enough to have filed the paperwork needed to officially become stateless. And he’s hoping to inspire others to do it, too.*

In the modern world, nationality is key to identity, and opens up access to government services. For many people, statelessness is a nightmare scenario. According to UN statistics, about 12 million people suffer from such territorial limbo. They’re mainly from troubled places like Somalia or Palestine.

There are “people who are desperate to have any nationality at all,” says Brad Blitz, an expert on statelessness at the Kingston University London. “This situation can make life very hard. Accessing basic services like healthcare or education can be practically impossible.”

For Gogulski, however, making himself stateless was as easy as walking into the US embassy in Bratislava, filling out some forms and handing over his passport.

He says it’s been liberating.

More than 1,000 Americans irrevocably renounce their citizenship each year, according to US Department of State statistics. (Update: the number of wealthy Americans abandoning their citizenship has more than doubled in 2011,  as the New York Times points out in a blog today.)

Most have relatively benign motives, such as lowering their tax burdens or wanting to return to their country of origin.

A longtime activist against US wars in Iraq and Afghanistan, among other causes, Gogulski viewed the extreme step of renouncing his citizenship as the only way to truly repudiate a system he hates.

“It makes me feel like I’m rejecting it, like I’m doing my part to fight back against what I see as [what’s] wrong with the world,” he says.

But in practically all cases, those who renounce have a second citizenship to fall back on. Otherwise they enter the weird and wacky world of having no nationality at all. Unlike most Western countries, the US will allow its former citizens to become stateless.

No one knows how many people choose to do this. The US government doesn’t track such data or discuss specific cases, a State Department spokesman told GlobalPost. But it strongly discourages statelessness in a memo that it hands out to those contemplating renouncing citizenship.

Indeed, becoming stateless on purpose can create some pretty nasty difficulties with authorities.

Just ask Garry Davis, the only other person definitively known to have intentionally become stateless. Davis renounced his US citizenship in France in 1948, and created his own “World Passport.” He has since been jailed dozens of times while trying to cross international borders. He says the last time he was given a hard time was at Washington DC’s Dulles airport. He asserted his human rights and world citizenship, and eventually, he says, the authorities got tired of him and let him in.

He says it’s still been worth it to prove his point that citizenship as a concept is ridiculous. “We have the right to claim sovereignty over ourselves,” says Davis, 90, who lives in Vermont. (Here’s a YouTube video of him purportedly crossing the Canadian border.) “It’s the right of freedom of choice, of self-determination. But challenges come with exercising those rights.”

In theory, Slovakia is the perfect place for someone like Gogulski to exercise his statelessness. It’s signed on to three UN conventions protecting refugees and stateless people.

Blitz, however, says practice could be very different. Slovakia has a poor record of dealing with its many stateless Roma (also known as gypsies) that live within its borders, he said.

“A stateless person there is likely to run into serious problems in the future,” he said.

Well, there were the troubles immediately after he renounced his citizenship when he had no valid ID and the bank didn’t know what to make of him. And he says he was once detained by Slovak police outside a bar, beaten and had no one to turn to for consular help.

“The US embassy?” he laughs. “They wouldn’t have done anything to help me even if I was a citizen.”

He now carries a special identification document for stateless people, issued by Slovakia under a 1954 United Nations convention

But then there’s the fact that he might never be able to travel to the United States to see his elderly mother again. In order to do that he’d have to apply for a visa – but he suspects he may be persona non grata, especially because he stopped paying his income taxes before he decided to emigrate to Eastern Europe about six years ago.

But just like Davis in Vermont, Gogulski says it’s all been worth it. It’s all about proving a point, he says — that the system can’t control him and that citizenship is a silly, anachronistic construct.

He could apply for Slovak citizenship but he likes being stateless. For one thing, it certainly is quite the conversation starter.

Gogulski’s ultimate goal: To start a revolution of sorts in which Americans begin giving up their citizenship and become stateless en masse. Maybe, he says, he can be the symbolic beginning of this movement.

“I know the chances of that are about this small though,” he says, holding his index finger and thumb together in the air.

Editor's note: This article has been corrected to clarify that Gogulski is one of two Americans known to become stateless in protest (as opposed to those who renounce US citizenship for tax reasons, with other nationality to fall back on), and to update the rate of wealthy Americans renouncing citizenship. (Return to text)