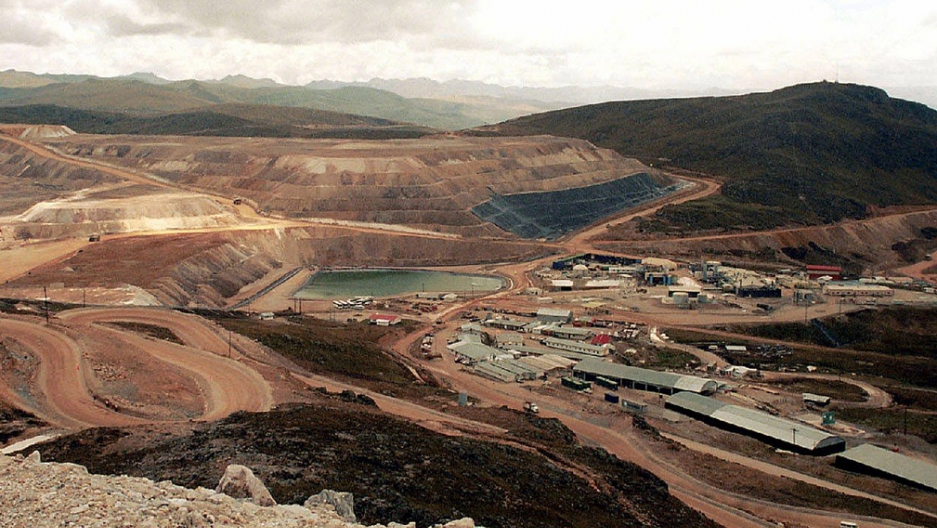 Editor's note: This article is part of "Scramble for El Dorado," an ongoing series about the scramble for Latin American gold, which has only intensified amid the global turmoil.

Now, just four months after taking office, the president is struggling to regain his balance after violent protests in the Andes forced the suspension of the proposed Conga gold and copper mine, a $4.8 billion project heralded as Peru’s largest-ever foreign investment.

As clashes between rock-throwing demonstrators and police continued over the weekend, Humala’s government declared a 60-day state of emergency in the northern region of Cajamarca.

More from GlobalPost: Chavez takes his gold back

The president’s backing for Conga has prompted accusations that he has betrayed campaign promises to respect the wishes of local communities opposed to mining and other infrastructure projects on their land.

With gold at record levels, the stakes could not be higher for Peru’s economic development, which is heavily dependent on mining royalties. The country is Latin America’s top gold producer, as well as a major source for copper, lead and zinc.

Conga would require the draining of several mountain lakes to make room for dumps of mining waste. The lakes form the headwaters of three different rivers used by thousands of local campesinos, or peasants, for their subsistence farms.

More from GlobalPost: The dangers of digging for gold in Colombia

Yanacocha, the consortium behind Conga, claims that artificial reservoirs would actually increase water supplies. But the protesters are unconvinced. Meanwhile, Peru’s environmental ministry has acknowledged that the company has not accounted for the cumulative effects of the project across Cajamarca’s fragile watersheds.

“The whole consultation process [for Conga] has been plagued with omissions and irregularities,” a community-relations expert who consults with some of Peru’s biggest mining companies told GlobalPost on condition of anonymity for fear of losing business. “No one even told the communities about the dumps. Of course they are up in arms."

Humala, a left-wing former army officer, came to power on promises to champion Peru’s poor. He quickly negotiated a new tax on the mining companies worth an extra $1 billion a year, cash that he plans to use for social spending.

Yet he has also gone out of his way to appease foreign companies slated to invest a total of $50 billion in Peru’s mining sector over the next decade.

“Conga is a critical juncture,” said Rodrigo Barrenechea, a sociologist at the Institute of Peruvian Studies. “The government will come out of this with either a major success or a major political liability on its hands.”

Yanacocha decided to suspend the project last week after six days of a general strike in Cajamarca, including a roadblock of the local capital and a riot which left 18 casualties, including six officers injured by rocks, and five protesters with bullet wounds. In a statement, the consortium acknowledged that the “conditions for a fruitful dialogue” with local communities do not currently exist.

The move may have bought Humala and his government a breather, but many regard relations between the extractive industries and neighboring communities as a ticking bomb.

“It is just a maneuver to win time and to confuse the population,” said Gregorio Santos, the regional president of Cajamarca. “The response that we demand is not from Yanacocha but from the government, that they declare Conga unviable.”

Yanacocha’s reputation in Peru has not helped.

Headed by Denver-based Newmont Mining, the consortium already runs the Yanacocha mine, also in Cajamarca, a 100-square-mile pit that is said to be the world’s second-largest gold mine. That mine also has led to fierce disputes with neighboring communities.

In 2000, a mercury spill at the Yanacocha mine poisoned more than 900 villagers, and the case was eventually settled out of court. Meanwhile, local opponents claim to have been placed under surveillance — and in one notorious, unresolved case a community leader was shot dead in 2006, days before he was due to meet representatives of Peru’s ministry of energy and mines to discuss his concerns with Yanacocha.

The consortium didn’t respond to GlobalPost’s requests for comment.

Yet according to the sociologist Barrenechea, whether Conga really would trigger the environmental devastation that locals fear barely matters.

“It is not about whether the project is legal or justified in terms of Peru’s overall economic development,” he told GlobalPost. “In a democracy, it is about whether it is legitimate in the eyes of the local population. That clearly is not the case right now, and the company and the government need to make a greater effort to communicate with local people.”

Humala has called for “dialogue.” He insists that Peru need not choose between water and gold.

He made a major gesture towards the country’s Andean and Amazonian communities when he recently chose the rainforest town of Bagua, scene of a massacre between police and indigenous protesters in 2009, to sign into law a bill that gives native communities the right to be consulted about infrastructure projects on their lands.

But he must now find a way to resolve the standoff in Cajamarca. Yanacocha intends to resume Conga once tempers have cooled, something that would likely only trigger a new wave of protests.

At some stage, Humala may have to choose between abandoning the mine — potentially setting a precedent that could handicap Peru’s ability to expand its critical mining sector — or forcing the Conga project through despite the discontent.

By declaring the state of emergency, Humala appears to be heading towards the second of those two highly unappealing options.