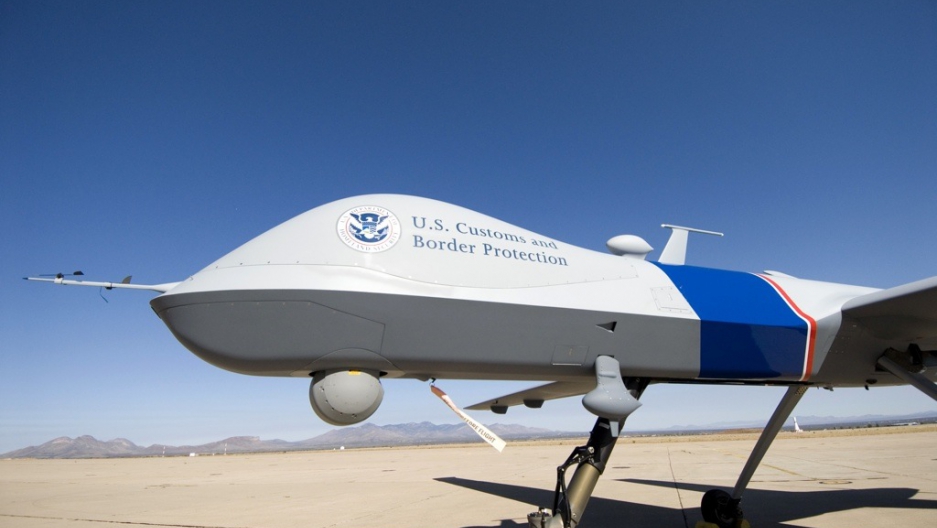 The MQ-9 Predator B, an unmanned surveillance aircraft system, is unveiled by US Customs and Border Protection at Libby Army Airfield on Oct. 30, 2006 in Sierra Vista, Ariz.
Credit: Gary Williams
Share

LUNA COUNTY, New Mexico — Raymond Cobos, the sheriff in these parts, said the horrors of Mexico’s drug war aren’t limited to the big cities of Juarez or Tijuana, and are creeping closer and closer to the United States everyday.

Just across the border sits Puerto Palomas, a Mexican town where Americans used to go — in relative safety — to shop, eat out and seek low-cost medical procedures.

But last years things began to change. And then, Cobos said, shocking events began happening on his doorstep.

“We saw the violence first-hand: the bodies, the tortures, the decapitations. People going to church found three heads displayed there in the plaza,” he said. “There doesn’t seem to be any single town anywhere of any prominence in Mexico that hasn’t had at one time a series of horrible criminal events in which people have been murdered, tortured, mutilated.”

Now fear is growing that such violence will spill over onto American soil and some officials are hoping that an increased reliance on unmanned aerial vehicles, or drones, will help stem the tide.

More from GlobalPost: Complete coverage of the Drone Wars

Although the number of Mexicans illegally crossing into the United States is declining, the potential for drug-related violence — especially as an ongoing war among Mexican drug cartels continues to spiral — has reestablished border security as a hot-button issue, and made the use of drones along the border ever more popular.

The Congressional Unmanned Systems Caucus, commonly known as the Drone Caucus, is a congressional group that works to promote the use of drones both domestically and abroad. It has doubled its membership since January while the number of drones used on the border to track illegal immigrants and drug activity has also steadily increased.

A bipartisan group formed in 2009, the Drone Caucus argues that UAVs are a peerless asset whose use should be amplified not only in weaponized strikes against extremists abroad, but also for the surveillance and tracking of those trying to breach US borders.

Drones now troll the southern border from California to Louisiana, and the northern border from Washington to Minnesota. With a potential flight time of more than 20 hours, the drones make it feasible to cover vast expanses of difficult terrain, while "pilots" split the shifts on the ground.

The first Predator drone was assigned to the southwest border in 2005. Four more soon followed, with the fifth delivered in October to the Naval Air Station Corpus Christi, in the district of Rep. Henry Cuellar, who is a co-chair of the Drone Caucus. A sixth will soon arrive in Sierra Vista, Ariz., and two more monitor the northern border out of North Dakota’s Grand Forks Air Force Base.

More from GlobalPost: Are the drone wars legal?

Maj. Gen. Michael Kostelnik, a retired Air Force pilot who has been working with unmanned technology since the 1990s, said that in his current post as assistant commissioner for the US Customs and Border Protection’s Office of Air and Marine, the drones could prove an invaluable tool.

“If you look at how important the UAVs have been in defense missions overseas,” Kostelnik said from Washington, DC, “it’s not really rocket science to make adjustments for how important those things could be in the homeland for precisely the same reasons.”

Other than the fact that border patrol aircraft do not carry weapons — and despite the presidential campaign rhetoric, Kostelnik said they don’t intend to weaponize them — the units are identical to those used in Pakistan and elsewhere in terms of intelligence collection and real-time interdiction support for agents on the ground.

Tucson Border Patrol Division Chief John Fitzpatrick said it was difficult to put into numbers just how valuable the drones could be for border security.

“Whenever the aircraft shows up, the agents on the ground are more successful and more efficient in what they do,” he said. “It gives us a lot of capabilities we didn’t have before.”

He acknowledged that there was some discomfort with the technology from people living in the area, who worried that the government would be looking into their backyards.

More from GlobalPost: The rationale behind the Drone Wars

“We reassure them there’s accountability in everything we do,” Fitzpatrick said.

For now, supply appears to be outweighing the need and on Capitol Hill, the Drone Caucus appears to be in overdrive. The last three UAVs purchased for border patrol — at a price tag of $32 million from the 2010 budget — were not even requested by Customs and Border Protection, according to an official from the Department of Homeland Security who spoke on condition of anonymity.

Congress sent no extra money for missions or maintenance, despite reports that planes already in service remain grounded at times due to a shortage of pilots, spare parts and other logistical restraints.

Customs and Border Protection reported that drones have been responsible for the apprehension of 7,500 illegal immigrants since they began operating six years ago — a tiny fraction of the total number of arrests that have been made over the same period. Using other means, in six years, the agency has apprehended almost 5 million people.

More from GlobalPost: The people behind the drones

“People play with the facts around this stuff,” Kostelnik said with frustration, acknowledging that high-profile, targeted killings overseas have politicized even unweaponized missions.

When asked what help he needed most back in Luna County, Sheriff Cobos said he would prioritize “boots on the ground,” but wouldn’t object to a little unmanned help.

Unlike Texas and Arizona, New Mexico doesn’t have a facility to receive data from drones, so it has had to rely primarily on a low-tech approach — manually tracking known routes with a night-vision scope, searching abandoned houses and sidling along the border, watching for Mexicans climbing and jumping off the 12-foot high border fence.

The other states are “banging their drums while we’re using a popsicle stick,” Cobos said about New Mexico.

“Sooner or later the cartels are going to say, ‘Hey, why aren’t we utilizing this space? Why are we trying to shove it through Arizona and Texas?’” he said. “The possibility [there’s] going to be a catastrophic civil war in Mexico is pretty high, and I have to face the probability that at some point I have to deal with it.”