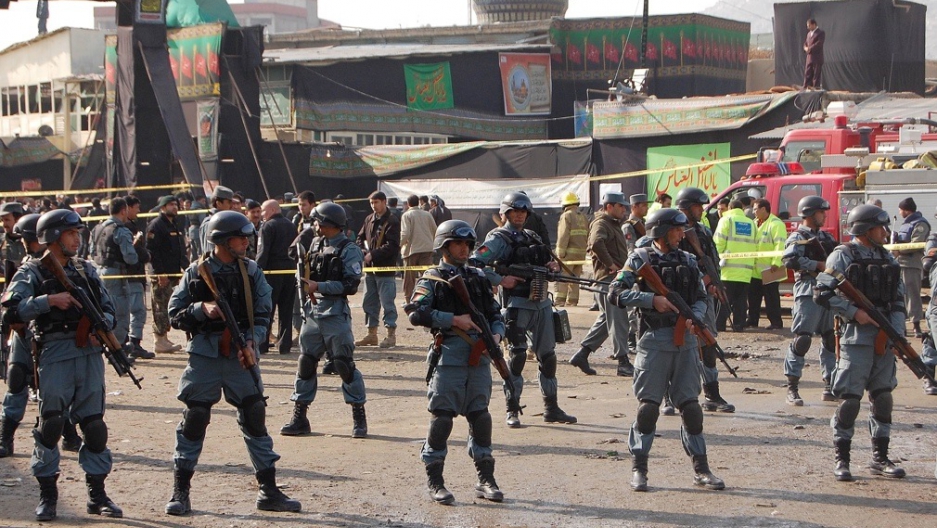 In one of the worst attacks in Afghanistan's modern history, and by far the worst attack in Kabul this year, 58 people were killed when a bomb struck the capital's historic old city at about 11:30 a.m., just as hundreds of Shiites were making their way to their most revered site in Kabul — the Abdul Fazl Ziyarat.

The attack punctuated an already dismal year for security in the Afghan capital, which has been deemed secure by the Pentagon and is one of seven areas in Afghanistan that have been fully transitioned to Afghan security forces. More than a dozen major attacks have occurred in Kabul since January, casting doubt on the US narrative that security is improving in Afghanistan.

Here's a look at the most serious attacks that have struck the capital so far this year.

OCT. 29 — A Taliban suicide bomber rammed a car filled with 1,500 pounds of explosives into a heavily armored NATO bus in Kabul, killing 17. The attacker, identified by a Taliban spokesman as Abdul Rahman Hazarbos, also blew a hole in the narrative of success the Pentagon had been perpetuating for more than a year now.

The attack came just after a report released by the Pentagon claimed that violence in Afghanistan was down for the first time in five years. The Wall Street Journal cited the report as evidence that the troop surge and the transition to Afghan security control were finally bearing fruit.

SEPT. 26 — An Afghan employed by the U.S. government killed one American and injured another after opening fire at a location security officials said was occupied by the CIA, and was close to the heavily-fortified U.S. embassy and presidential palace in Kabul. The gunman, whose motives were unclear, was shot dead at the scene. The CIA is said to have taken over the site, once known as the Ariana Hotel, shortly after the U.S.-led invasion of Afghanistan in 2001.

SEPT. 20 — Former Afghan president and chief negotiator for peace talks with the Taliban, Burhanuddin Rabbani, was assassinated in a suicide attack at his home in Kabul. The assassination of Rabbani, 71, a polarizing but influential figure in Afghan politics, marked a serious setback for the government of Afghan President Hamid Karzai. Rabbani was serving as the chief of the Afghan government’s High Peace Council — a body tasked with spearheading peace negotiations with Taliban insurgents — and was a key ally of the United States and Karzai.

SEPT. 13 — A coordinated attack by the Taliban on the US Embassy in Kabul and several other sites killed 14 people during a nearly 20-hour seige. NATO chief Anders Fogh Rasmussen's response, addressed to reporters in Brussels, jarred with the scene. "We are following the events closely," he said. "We have confidence in the Afghan authorities' ability to deal with this situation."

He added: "We are witnessing that the Taliban try to test transition but they can't stop it. Transition is on track and it will continue."

"Transition” is the term used for the transfer of security responsibility from NATO to Afghan National Security Forces (ANSF), which began in July. So far, seven areas, including Kabul, have been handed over.

AUG. 19 — Nine people were killed after gunmen stormed a British cultural center in Kabul. Following a shoot-out with Afghan and British troops that lasted seven hours, the British Foreign Ministry confirmed that the gunmen had all been killed. The attack, claimed by the Taliban, came as Afghanistan marked its independence from Britain in 1919. Media reports said a suicide car bomb was detonated outside the British Council, destroying the compound wall, before half a dozen heavily armed men forced their way inside.

Authorities said among those killed were at least eight Afghan policemen and a foreign security official — a member of the New Zealand special forces.

AUG. 14 — A suicide attack on an governor’s compound in the province of Parwan, north of Kabul, killed 22 people. The suicide bombing, which was followed by an armed assault in the Parwan provincial capital of Charikar, took place just after 11 a.m., interrupting a meeting of local police and intelligence heads, as well as international advisors that included several U.S. military officials. Charikar is home to Bagram Airfield, a major base for U.S. and NATO troops.

JUNE 28 — The explosions and firing went on for hours, residents said, as militants laid seige to Kabul's Intercontinental Hotel. Those living near the scene reported several loud explosions as late as 2:15 a.m., and several people described random and sporadic firing in other parts of the city as well.

At least six attackers had somehow made their way inside the Intercontinental, according to Afghans security officials. An hour after the attack began, at about 10 p.m. in Kabul, reports said that up to 10 people had died. Twenty-one people were killed in the final count. Local residents said that the loud booms of rocket explosions could be heard, as well as the sound of automatic weapons and rocket-propelled grenades.

JUNE 18 — Just over a week ago, suicide bombers targeted a police station in central Kabul, killing at least nine. Police reportedly noticed one of the militants approaching the station and acting strange. So they shot him. A second militant then detonated his vest, killing three police officers, one intelligence agent and five civilians.

(GlobalPost in Kabul: In search of respite in the middle of a war zone)

MAY 21 — A suicide bomber killed six students and wounded almost two dozen people at a heavily guarded national military hospital in Kabul. The bomber struck in the Charsad Bestar Hospital's cafeteria as medical students gathered to eat lunch at 12:30 p.m. local time on a Saturday. An Afghan intelligence official said there had actually been two suicide bombers at the hospital. One caused the blast in the cafeteria and the other has not yet been found, he said.

APRIL 27 — In one of the worst incidents of a disastrous spring, eight troops from the NATO-led International Security Assistance Force and one international contractor were killed when an Afghan Air Force pilot, dressed in uniform, opened fire in the military wing of Kabul International Airport.

The Taliban were prompt to claim credit, saying that this latest act of mayhem had been planned and ordered by the Islamic Emirate of Afghanistan, the Taliban’s name for themselves. They even named the shooter, “Azizullah.”

APRIL 18 — This day marked a significant milestone for the Afghan capital. The Taliban managed to penetrate into the heart of the Defense Ministry.

An armed man with an Afghan Army uniform and a valid ID managed to gain access to the offices of the defense minister himself, killing two and injuring seven before being shot by bodyguards. Defense Minister Abdul Rahim Wardak, the presumed target of the attack, escaped harm because he was not in the building at the time.

But the attacker was not an imposter at all. He was a bona fide member of the Afghan armed forces, a fact that sent shockwaves through the military establishment here. Worse still, the Taliban publicly gloated that they have another 150 to 200 infiltrators in Afghan institutions, just waiting to pull the cords on their suicide vests.

FEB. 14 — Two security guards were killed and two other persons wounded when a suicide bomber blew himself up inside the gates of a hotel and shopping complex in downtown Kabul. In a text message sent to several domestic and international media outlets, Taliban spokesman Zabiullah Mujahed said that the insurgents were making good on their repeated threats to target foreigners.

City Center, the site of the attack, was Kabul’s first “mall,” and is still a powerful symbol of Western-style affluence. The complex also houses the Safi Landmark, a four-star hotel that is popular with foreigners.

This was the second time that City Center had been attacked. Last February, a series of blasts aimed at local guesthouses heavily damaged the outside of the shopping mall and blew out most of the complex’s emerald-green windows. It was several months before the hotel and the shopping center reopened their doors.

JAN. 28 — A suicide bomber attacked a popular downtown supermarket killing 14 people, including an Afghan human rights activist and her husband, a prominent doctor, and their four children.

Within an hour of the blast, which occurred at mid-afternoon when many Kabul residents were profiting from what was a day off to catch up on their food shopping, all the embassies, the United Nations, and other international organizations issued immediate lock-downs of personnel for the third that week.