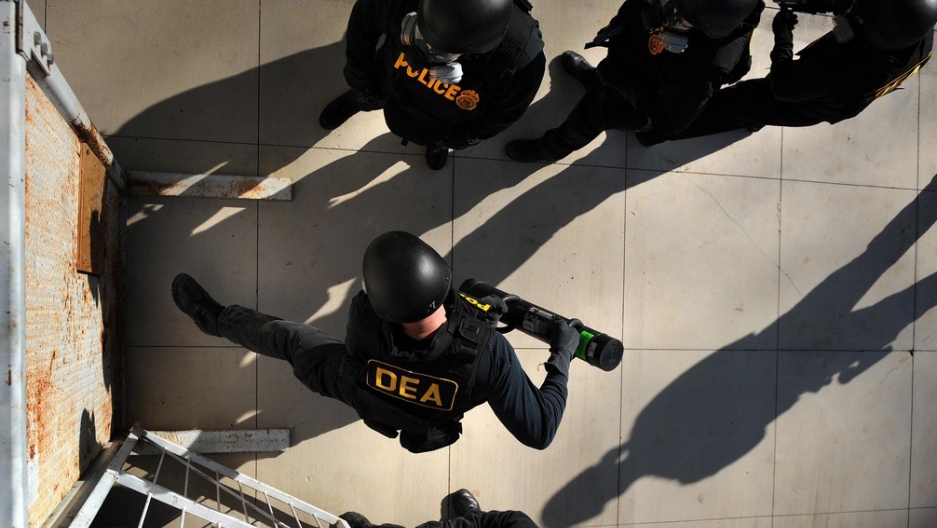 Federal agents are on the warpath in Mexico. Here, they're just in training.
Credit: TIM SLOAN
Share

MEXICO CITY, Mexico — The shady figures set up bank accounts in false names and fill them with drug money. They keep convicted criminals on their payroll, and watch guns smuggled over the border. And for those wanting to transport cocaine, they have trucks and ships available.

But these clandestine operators are not drug traffickers. They are the American agents paid to bust them.

As Mexico suffers from its worst drug violence in history, a series of scandals have erupted over American agents fighting the war against Mexican cartels on the frontline.

The hot potatoes, which involve at least four American agencies, highlight the ethically dubious strategies that have been developed in drug law enforcement over decades. They also show how drug agents who are fighting a frustratingly difficult war have upped the ante with tactics that have only inflamed violence further.

Read more: Should the ICC intervene in Mexico?

“In the name of the larger good, agents commit smaller sins. But they are nonetheless sins,” said Bruce Bagley, an expert on the Latin American drug war at the University of Miami. “These are not just grey areas that the agents veer into. They are often black areas.”

The controversial tactics stem from the character of the drug trade that agents are assigned to fight. In contrast to traditional criminal gangs such as bank robbers, the drug trade is a global industry involving thousands of people and international revenues of hundreds of billions of dollars every year.

In the decades since the Drug Enforcement Administration was set up under President Richard Nixon in 1973, agents have discovered that nickel and dime street busts don’t hurt the smugglers. To bring down the kingpins, they have to infiltrate their organizations. This means agents are posing as traffickers and hiring confidential informants among the villains.

“To make cases against the major players, we have to get into their world,” said a DEA agent who has posed as a trafficker to infiltrate Mexican cartels. “Otherwise you are just busting the small loads that you are lucky to stumble upon.”

Mexican President Felipe Calderon has encouraged American agents to raise their fight against cartels as part of his offensive on drug gangs, which began in 2006.

As a result, American agencies have increased the number of officers and sting operations in Mexico to previously unseen levels, agents say.

These operations have sparked a serious of uncomfortable scandals.

First, agents from Immigration and Customs Enforcement were found to have been paying informants who were actively committing murders in northern Mexico as far back as 2004.

Then, it was discovered that agents from the US Bureau of Alcohol, Tobacco and Firearms had let guns “walk” from American shops into the hands of Mexican gangsters in the infamous Operation Fast and Furious in 2009 and 2010. Officials had hoped to trace the guns to crime kingpins, but many were traced to murder scenes in Mexico, leading to calls for the heads of top officials in Washington.

And most recently a New York Times story this Sunday highlighted how DEA agents launder drug money in order to entrap gangsters.

The scandals have strained the Mexico-US drug-war alliance, with pundits and opposition politicians south of the border saying they show that the US agents are complicit with drug cartels in the violence that has ripped through the country.

American law enforcement chiefs say that their information has led to the arrest or killing of major drug kingpins, such as the “Boss of Bosses” Arturo Beltran Leyva, who was shot dead by Mexican marines in 2009.

“Under the leadership of President Felipe Calderon, cooperation between the US and Mexico is at an all-time high,” DEA Administrator Michelle Leonhart said this year in Congressional testimony.

Critics say the core problem is that agents are fighting a war that simply can’t be won.

When major drug kingpins, such as Beltran Leyva, have been taken down, it has only inflamed violence as rivals fight to take over their trafficking empires.

“Agents get frustrated with the lack of results and take on an increasingly high-risk strategy,” said Bagley of the University of Miami.

Russell Jones said he discovered how drug busting led to difficult choices when he worked as an undercover narcotics detective busting cocaine traffickers in California.

“I was aghast about what was happening. I saw people crossing the line,” said Jones, who became so disillusioned he eventually left the police force and joined Law Enforcement Against Prohibition, a nonprofit drug policy reform group.

“I saw what was going on and got out. This isn’t a few bad apples. This is the culture of the whole war on drugs. What is happening in Mexico now is especially worrying. Agents have allowed money to walk that can be used to pay for killers,” Jones said. “We cannot win this war. We have to look for alternative solutions.”