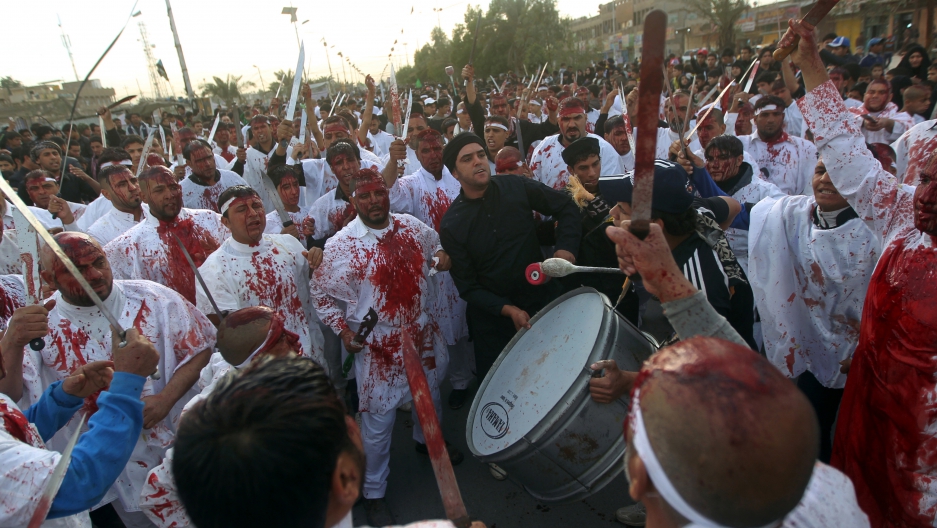 A car packed with explosives blew up as a procession of pilgrims passed through the al-Nil area, killing 16 people, including women and children, the BBC reported. Reuters reported that 45 people were wounded in the same attack. Another bomb exploded near a gathering of pilgrims in Baghdad, killing at least seven people.

Read more at GlobalPost: Camp Victory: US hands over military headquarters to Iraq

"A powerful and horrible explosion went off behind us, smoke filled the area," said Hadi al-Mamouri, who was taking part in the ritual during the first attack, Reuters reported. "I could only hear the screams of women and I could only see the bodies of women and children on the street."

The number of deaths have yet to be confirmed and range from 18 to 32 according to different news organizations. Reuters reported at least 32 people were killed, mostly women and children.

The two attacks came a day before the climax of Ashura, when Shiite Muslims commemorate the martyrdom of the Prophet Muhammed’s grandson, Imam Hussein. Shiites demonstrate their ritual guilt and remorse for not defending Hussein by beating their chests, flaying themselves with chains or cutting their scalps during processions, the Associated Press reported. They also gather at night to listen to stories about Hussein’s family.

Roadside bombs were also detonated near pilgrims in Hilla, killing at least one person in each attack, the BBC reported. Many point out that the attacks symbolize Iraq’s fragile security situation less than a month before American troops are to leave the country. Approximately 200 people were killed in November. However, Iraqi officials said they are capable of protecting their people, the BBC reported.