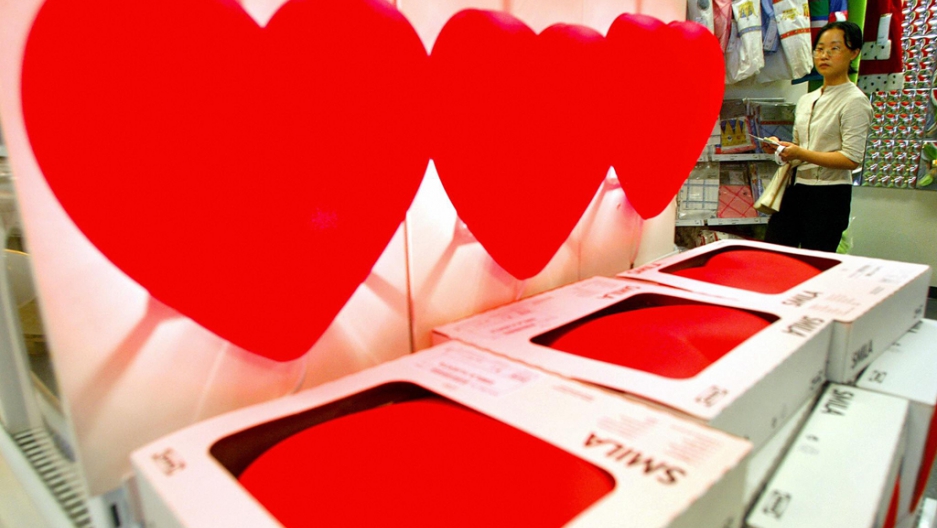 Heart-shaped lamps are sold at an IKEA store in Shanghai. The furniture company finds itself as the new dating hot-spot for senior citizens out looking for either love or friendship.
Credit: Liu Jin
Share

In a typical IKEA location, customers can find an inexpensive couch, test out a new mattress, or—in the case of IKEA stores in Shanghai—find a new mate.

According to The Wall Street Journal, the dating hot-spot for senior citizens who are out either looking for love or new friends, is none other than the Swedish furniture manufacturer.

Unlike bars or dance clubs, the atmosphere at IKEA is casual and non-threatening. It makes it easy for the seniors, who show up in groups of 70 to 700 people, to chat over a cup of coffee. And because IKEA serves free coffee to anybody carrying an IKEA Family membership card, some of the seniors don't even have to pay for their cup. Zhou Hong works at IKEA as a card swiper, and she told The Wall Street Journal that on average, she hands out around 500 cups of coffee each time the seniors meet.

Controlling the elderly crowd has proven difficult, however. The Wall Street Journal reported:

They sit for hours in the cafeteria, leaving behind orange peels and egg shells they have picked off boiled eggs brought from home. Occasionally, security guards intervene to try to keep order.

... Policing the freeloaders and the unruly isn't so easy. Attempting to tell a rowdy crowd of seniors to lower their voices recently, 24-year-old security guard Li Ya says he encountered resistance. An older man who didn't enjoy being hushed by someone 40 years his junior, says Mr. Li, once splashed scalding coffee on him. "They always argue that they have the right to do what they want here," says Mr. Li.

Other participants do feel a little guilty for what they are turning their IKEA into. One senior citizen told NPR that she knew the meetups weren't exactly appropriate since IKEA is a business after all: "The best thing would be if we had places like this in our own community, even if there is no coffee or tea, we can bring our own."

Using IKEA for purposes other than buying furniture is not entirely unheard of. In June 2009, The New York Times reported how some customers use IKEA as a place to carry out an actual date. The store is especially beneficial to those who have children. Couples can have dinner at an IKEA cafeteria while watching their children in the adjacent play place at the same time.