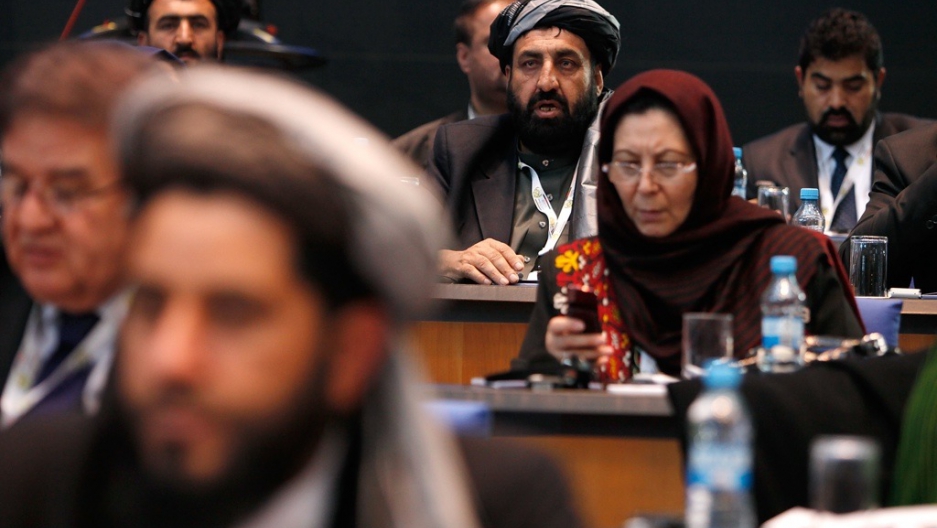 KABUL, Afghanistan — Bonn 2, as it is called here, has been something of a letdown.

The conference called to mark a decade of international engagement in Afghanistan is being held 10 years to the day after the dramatic gathering in Germany that installed Hamid Karzai as the leader of the interim government, outlined a plan for establishing democracy in Afghanistan, and saw an outpouring of international goodwill and commitment to the struggling, post-Taliban nation.

This time around, few illusions remain. Afghan democracy has never really taken off, Karzai’s luster has been badly tarnished by corruption in his government and by his own erratic behavior, and the international commitment is rapidly fraying.

In his speech opening the conference on Monday, Karzai called for another decade of support, warning that Afghanistan could once again descend into civil war if its funding needs were not met.

More from GlobalPost: Is Afghanistan on the brink of civil war?

“Our young democracy remains fragile,” he told the assembled delegates. “The people of Afghanistan are looking to this conference for clear affirmation of commitment to make security transition and economic progress irreversible."

Karzai’s concerns are understandable. At present, close to 90 percent of the Afghan government’s budget comes from international assistance, according to the US Government Accountability Office.

Without the billions in aid dollars flowing into the country, the government cannot pay its army and police, or even keep the lights on for very long.

The international community had said from the very beginning that Bonn was not about money; this was not to be a pledging conference, no monetary commitments would be given. Instead, it was all about soothing Afghan fears that the West would run away again, as it did in the 1980s.

"The United States intends to stay the course with our friends in Afghanistan," said US Secretary of State Hillary Clinton in her address to the conference. "We will be there with you as you make the hard decisions that are necessary for your future."

More from GlobalPost: 10 yeas on, Afghanistan not far from where it started

The conference drew delegates from close to 100 countries, and various civil society groups from Afghanistan were dispatched to plead their cases.

But remarkable by their absence were two of the most important players in the future of Afghanistan: the armed opposition that is mounting an increasingly desperate insurgency, and the Pakistani government that, if both US and Afghan government officials are to be believed, is backing them.

The former Taliban ambassador to Pakistan, Mullah Abdul Salaam Zaeef, and the Taliban’s last foreign minister, Wakil Ahmad Muttawakil, were on the outskirts of the festivities, but did not take part in any formal sessions. Both men had voiced earlier objections to the conference, and had not been invited, in any case.

US Ambassador to Kabul Ryan Crocker had earlier declared that there was no place for the Taliban in Bonn, a statement that irked the Afghan government. One Afghan official, speaking off the record, said that it was not the Americans’ place to decide who would and would not be invited to the conference, which was formally hosted by Afghanistan.

“That was a decision to be made by the Afghan government,” the official said.

In the end, no members of the armed opposition had a seat at the table, repeating what many saw as one of the key mistakes of Bonn 1.

Pakistan boycotted the event in protest of a US airstrike in late November that left 24 Pakistani soldiers dead. The United States is claiming miscommunication; the Pakistanis insist that it was deliberate aggression.

More from GlobalPost: The myth of Afghan democracy

Minus the Taliban and Pakistan, the second Bonn conference could accomplish little of substance.

“This conference cannot produce miracles and one should not have high expectations from it,” said Timor Sharaan, a Kabul-based political analyst. “The first Bonn conference was an agreement between the Western powers and the Afghan factional representatives to legitimatize international intervention in Afghanistan. The second Bonn Conference is part of a Western exit strategy to legitimize the 2014 NATO withdrawal.”

Most would agree that Afghanistan is better off now than in the dark days of 2001, when a harsh Taliban regime had driven the country into isolation, when women were largely closeted in their homes and life, in the words of one young Afghan, “seemed to stand still.”

But the heady hopes of the first Bonn conference have not been realized. While the Afghan government, with its rampant corruption and failure to achieve any kind of national consensus, comes in for a large share of the blame, special ire is reserved for the policies of the countries who had taken Afghanistan’s welfare upon themselves.

“This conference is significant in that it highlights the strategic deficiencies in the policies of the United States and the international community,” said Candace Rondeaux, the Kabul-based senior analyst for the International Crisis Group, speaking from Bonn.

Some of those deficiencies, Rondeaux added, are the lack of enforcement and implementation of the many programs that have been initiated, the lack of genuine political engagement within Afghanistan, and the failure to introduce a substantive regional dialogue.

After 10 years, thousands of lives and billions of dollars, Afghanistan is still a backward, war-torn nation, unable to fend for itself.

The national delegation that went to Bonn to present their concerns was unable, for the most part, to form any kind of coherent message. According to sources inside the conference, many groups limited themselves to complaints, voicing excuses rather than advancing solutions.

“There was a lot of breast-beating; almost every speech began with a long litany about ‘30 years of war’ and what it has done to the nation,” said one observer. “There was not much clarity.”

Back home, many Afghans were watching the spectacle with a mixture of hope and confusion.

“They are just worried about the money,” said a student at Kabul University. “They know that Karzai cannot do anything. They have no hopes for the Afghan government. But they are worried about their pocketbooks when the foreign soldiers go home.”