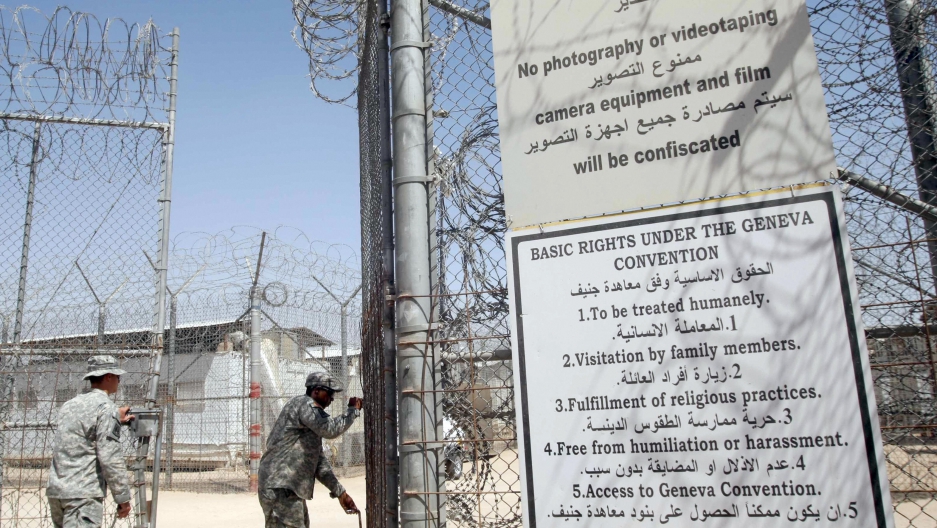 The gate to Camp Bucca, back when it was still a US prison base.
Credit: Essam Al Sudani
Share

Oil investors and executives who visit Iraq have a new option for lodging: Camp Bucca, a former US prison base, has been transformed into a hotel, The New York Times reported.

The Basra Gateway hotel in Southern Iraq opened on November 24, to coincide with an oil and gas conference in nearby Basra. Operated by the Kufan group, the hotel has retained much of the base's original esthetics, including the barbed wire that surrounds the property as well as the military residential trailers, known as CHUs (containerized housing units). The units, some of which have been equipped with individual plumbing, go for $190 a night.

The venture is an attempt by investors to make commercial use out of recently abandoned military compounds, which will all be handed over to the Iraqi government by the end of the year. Basra, about 330 miles from Baghdad, is in the midst of many of the country's oil fields, and The International Energy Agency projects that oil production in Iraq will increase faster than in any other country over the next 25 years, the New York Times reported.

Around 150 executives who were looking into new investment opportunities in Iraq stayed at the hotel; many of them were not told that it was a former prison base until they arrived. One group of Swedes were so dismayed they checked out early.

“People complained,” Loay Almalaieka, a vice president of the Kufan Group, told the New York Times. "The new plumbing burst in some rooms. We couldn’t achieve a great level of satisfaction with these executives, for obvious reasons.”

Several companies, including Exxon, have looked into renting permanent space at the hotel for their employees. As Amar Latif, Basra Gateway’s general manager, told the New York Times,

“Exxon loved it,”  Mr. Latif said of the former Camp Bucca. Their representatives visited half a dozen times, he said, to examine the security arrangements, taking in the sprawl of razor wire and concrete walls and exclaiming, “Oh boy, it’s excellent!”

On the downside, Iraq’s security situation is still so dismal that a former prison appears alluring as a hotel.

Most US bases will become Iraqi military bases, with a few exceptions. The Saddam Hussein-era palaces at the Victory Base Complex may turn into a convention center, The New York Times reported. Only about a dozen of Iraq's 505 US bases are still in American possession.

What do you think about the conversion of Camp Bucca? Would you consider checking in? Let us know in the comments.