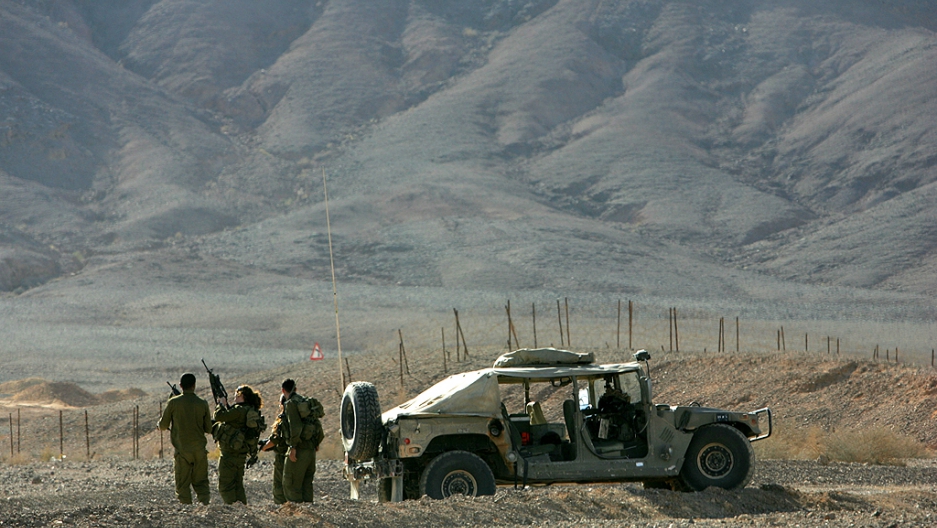 Female and male soldiers from the Caracal battalion check their weapons before their evening patrol June 12, 2007 along the Israeli-Egyptian border north of Eilat.
Credit: David Silverman
Share

Israel is constructing a steel fence along its 140-mile Sinai Peninsula border with Egypt, in a sign that diplomatic relations between the two neighbors and allies may be shifting.

A cross-border raid by Israeli commandos earlier this summer left five Egyptian officers dead, and eventually caused thousands of Egyptian protesters to storm the Israeli embassy in Cairo this September.  The Israeli troops had been searching for armed militants who killed eight Israelis on their side of the border.

The incident sparked the worst diplomatic crisis between the two nations since they signed a peace treaty in 1979.

Israel's defence minister recently called the results of Egypt's parliamentary elections, which appear to be heading towards a landslide victory for Islamist parties, "very disturbing."

The 15-foot high barrier is encased with razor wire and will eventually stretch the entire length of the Egypt-Israel border, according to the Washington Post:

Originally intended as an obstacle to the thousands of African migrants and asylum seekers who sneak across the frontier annually, the barrier is increasingly seen as a bulwark against security threats emanating from Sinai.

But the rising fence is also a metaphor for how Israel sees itself in a changing Middle East: Beset on all sides by profound shifts in its Arab neighbors that could alter the strategic balance in the region, it is bolstering its defenses and preparing for the worst.