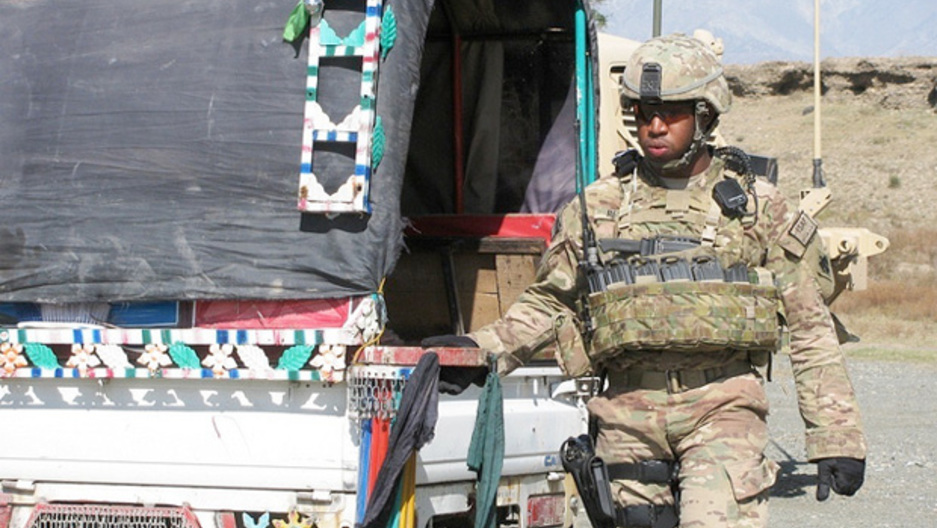 Share
The head of Pakistan's army Friday gave the go-ahead for his soldiers to return fire on US troops, if attacked. The change in rules-of-engagement comes after Saturday's NATO airstrike that killed 24 uniformed Pakistani soldiers. The attack sparked fury in Pakistan and led the country's leaders to close a critical US supply route to land-locked Afghanistan. Before 9/11 and the US invasion of Afghanistan, cargo transport across the Pakistan-Afghanistan border was minimal. But now, with over 130,000 NATO troops to sustain in land-locked Afghanistan, supplies had to come from somewhere, and the cheapest and fastest route is through Pakistan. "The industry has grown from zero to a phenomenal size," said Mohammed Rajpar, managing director of a major shipping agency based in Karachi. "The way the western countries sustain their troops is even the water they shower in is imported, forget the water they drink," Rajpar said. "And all their food, drink, transport, surveillance, weapons. It spawned an entire industry." At its peak, some 500 trucks carried fuel and goods each day from the port at Karachi to Afghanistan. Today, that number is down to between 200 and 300, as NATO shifted some supply to what is known as the "northern route," going through the Central Asian republics. Even now though, almost half of NATO's supply travels through Pakistan. But after last Saturday's attacks on a Pakistani border post, the Pakistani government closed off its border crossings with Afghanistan. Private transporter unions issued statements of support for the government reaction. Nawab Sher Afridi, secretary general of the Oil Transporters Association, said six of his trucks are involved in the transporting fuel to Afghanistan, but that he has always been against NATO's actions there — a contradiction he readily admitted. "We are against NATO, I'm telling you plainly," Afridi said. "Our original home is in Afghanistan. We are ruining it ourselves. What kind of interview do you want from someone who is ruining his own home. But when our livelihood is at stake then the name of necessity is "thank you". There is no limit. You have to accept the law that they have imposed, and that is the dollar. And in front of the dollar, my faith is nothing." But now, the truckers said they're glad the government is taking a stand against NATO, and, for now at least, they said they're willing to bear the financial loss. Babu Jan Shinwari, a driver and owner of a goods supply truck, said the personal gains they have made over the past 10 years have come at a cost for society. "Its true, we are making more money than we did before," he said. "But if you look at it another way, we have also suffered a great deal. We have lost human lives, homes have been destroyed, there have been drone attacks and terrorist bomb blasts. It' a huge loss." In fact, in 2005, Babu Jan's cousin was killed in a bomb attack near the Kandahar Air Base, in Afghanistan, while he was sleeping in the cabin of his oil tanker. While the truckers claim to be in favor of Pakistan's action, the closing of the supply lines is having an impact. Many of the trucks that would normally be on the roads to Afghanistan are sitting idle in Karachi. And shippers have had to rent extra space at the port to store cargo that has nowhere to go for the meanwhile. This isn't the first time that the supply lines have been suspended. And most observers find it hard to believe that Pakistan will keep the supply lines shut permanently this time, because of both strategic and economic interests. But shipping company director Mohammed Rajpar said the industry is already starting to think of what comes next, since NATO has already announced plans to leave Afghanistan by 2014. "These truck drivers and truck owners are probably among the most clever commercial, versatile businessmen on the planet. They have operated in the roughest of environments and the most difficult of circumstances at great personal risk to their life and property," he said. "They'll find other avenues of business. And second they will transfer some of this knowledge to elsewhere in the business. How to secure cargo, meeting deadlines. Hopefully they'll transfer this to the commercial side."