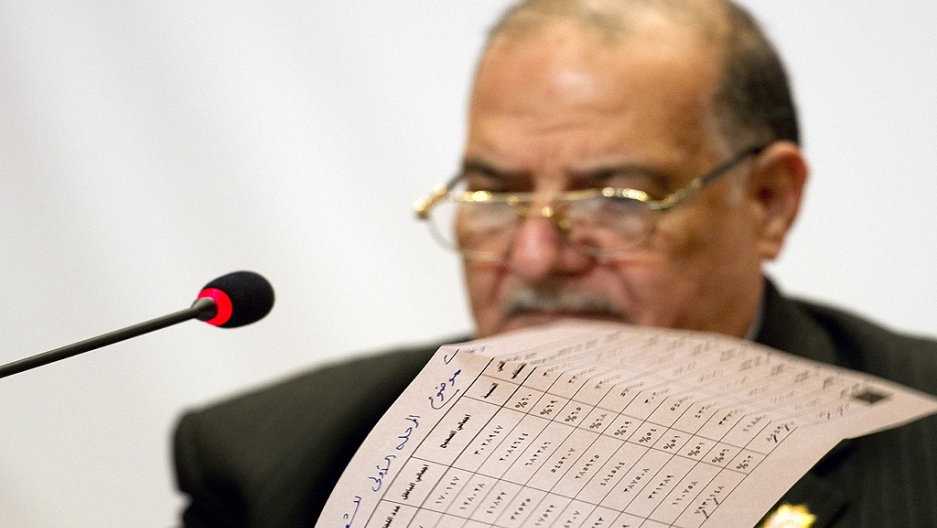 A document with poll results sits in front of Abdel Moez Ibrahim, head of the Egyptian election commission, during a press conference in Cairo on December 2, 2011. Turnout in the opening phase of Egypt's first post-revolution election was 62 percent, the highest in the country's history, Ibrahim announced.
Credit: ODD ANDERSEN
Share

CAIRO, Egypt — A record 62 percent of eligible Egyptian voters went to the ballot boxes in the first phase of the country's parliamentary elections this week, according to election officials.

The statistics were announced Friday night at a Cairo press conference that was called to release partial election results.

"This is the highest turnout in Egypt's history since pharaonic times," said Abdel Moez Ibrahim, the top official with the nation’s Supreme Elections Commission.

Ibrahim announced three winners of the individual races, but as the AP reported, other information was scarce:

A third of the lower house is set aside for candidates running as independents. In the first round, only three of them won clear victories. The rest will have to enter runoff elections next week.

Calling the conference to a close, Ibrahim said, "I'm out of gas," and told reporters pressing for more information that they should get the results themselves from material distributed by the election commission.

More from Cairo: As polls close, Egypt closes in on democracy

Runoffs for the individual seat races will be held next week.

Complete election results (including proportional party list winners) of the election will not be available until January, when the third and final stage of Egypt’s parliamentary election is held.

Read this article for more about the country’s “convoluted” 2011 election process that will eventually determine the country’s next parliament.