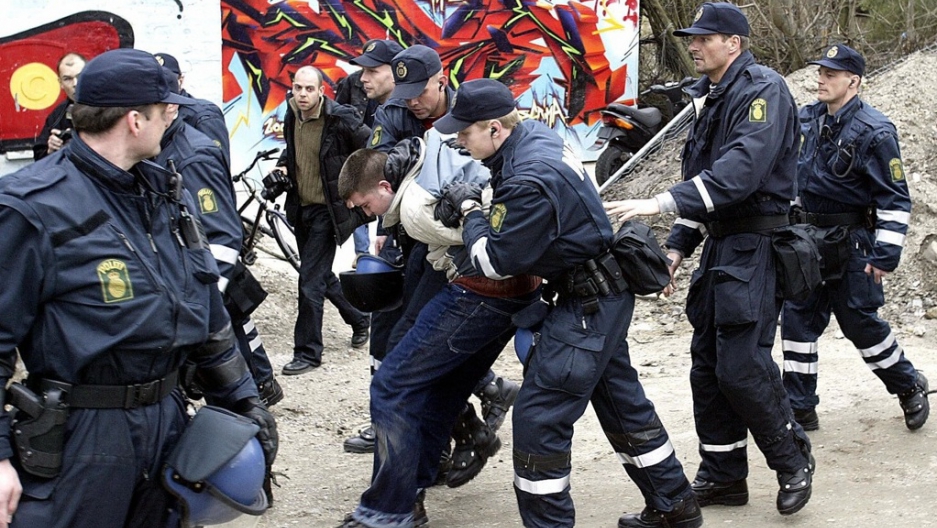 Danish police arrest an unidentified person in a raid in Copenhagen's Free City, Christiania, in 2004 in a final attempt to close down the world famous Pusher Street. These days, the city is taking an increasingly libertarian approach.
Credit: Mogens Flindt
Share

Editor's Note: Got any good story ideas for GlobalPost? We'll have our correspondents cover the best ones. Check out RedditSuggest for details.

MALMO, Sweden — Copenhagen just got a lot closer to legalizing the sale of pot.

If approved by the Danish parliament, next year the city could grant licenses to individual marijuana growers. City-owned shops would then sell their crop to the public.

That prospect was deeply amusing to Israel, a burly dreadlocked Cuban in Christiania, the city’s self-declared “free town.”

"I will grow it!" he said with excessive zeal. "I’ve got this big bag of seeds."

Israel was sitting outside a cafe near Pusher Street, the area’s open-air cannabis market, rolling a succession of monster joints for the locals and tourists who drop by for a smoke.

Copenhagen’s city municipality voted in recent weeks, 39 votes to 9, to empower its social affairs committee to draw up a detailed plan to legalize cannabis.

If that plan is approved by Denmark’s new left-of-centre parliament next year, the city could become the first to legalize marijuana, rather than simply tolerate it, as police do in the Netherlands.

“We are thinking of perhaps 30 to 40 public sales houses, where the people aren’t interested in selling you more, they’re interested in you,” Mikkel Warming, the mayor in charge of social affairs at Copenhagen City Council told GlobalPost. “Who is it better for youngsters to buy marijuana from? A drug pusher, who wants them to use more, who wants them to buy hard drugs, or a civil servant?”

Judging by the good-natured way Israel joshed with one of the day’s customers — a teenager whom he appeared to have reduced to an incoherent, pale-faced stupor — he’s not exactly threatening.

But the same cannot be said for the gangsters on Pusher Street, whose crew cuts and bulky jackets make them look more like nightclub bouncers. They are a far cry from the hippie idealists who founded Christiania in a disused army barracks 40 years ago.

It is these people, the biker and immigrant gangs who manage the city’s drug supplies, that Warming wants to cut out.

"People who use marijuana are paying money to criminals, mostly to gang members, and it’s a market that every year, is worth up to two billion Danish kroner ($350 million). That’s enough to fight for, which is why we’ve had a war between the gangs in Copenhagen," he said.

That’s why he doesn’t want to institute a system where smoking marijuana is tolerated in cannabis cafes, but officially illegal, and therefore profitable for criminals to grow and import.

Copenhagen effectively operated such a system in Christiania until 2004, when the police moved in and shut the district’s thriving cannabis cafes, forcing the trade into street stalls.

And it still exists in the Netherlands today, although Dutch authorities are tightening up.

“We don’t want an Amsterdam model," Warming said. "We want a way to make it legal to import or grow marijuana."

The details still must be ironed out. But Warming imagines a system similar to the state-owned alcohol monopoly that operates in neighboring Sweden.

The government would either grow marijuana itself or license growers, as already happens in countries that allow the drug to be used for medical purposes.

The Danish parliament voted down a similar proposal submitted by Copenhagen City Council three years ago, but since then a new left-of-centre government has come in, giving it a better chance of getting through.

In a sign of the changing times, some in the ruling Social Democratic party are beginning to support the idea.

Lars Aslan Rasmussen, the party’s official spokesman on cannabis, believes it is only a matter of time.

"If you look at Copenhagen city, at first it was only the Socialists, then it became the Red-Green Alliance, then it became the Social Democrats, and now we’ve got some of the Liberals," he said. "I think we are slowly getting there. Around the world, people are changing their opinions on this. The war on drugs, it didn’t really work."

Many in his party disagree, not least Ole Haekkerup, the legal spokesman.

"If we make it easier to get marijuana, we expect that more people would end up on hard drugs," he told Ekstra Bladet, a Danish newspaper, after the vote.

The Danish Socialist People’s Party quietly dropped their support for legalization when they joined the Social Democrats’ coalition in June in the run up to September’s election.

But support is nonetheless building. Lars Kragh Andersen, who was sacked as an assistant policeman earlier this year after refusing to arrest cannabis users, has become a prominent campaigner.

The law student this week sent a statement to the Copenhagen police announcing that he had begun dealing small amounts of a cannabis from his home. To prove his point, he included a marijuana joint in the letter.

Israel, seemingly oblivious to the possible loss of earnings, agrees that Warming's plan is the only sensible way to go.

"The government created the gangs," he said. "They have to open up, because every drug in this town is legal, even if it’s not legal. You can find hash and cocaine on every street corner. Eighty percent of the population here in Copenhagen are smoking. But if I smoke some stuff, I’m a criminal."=