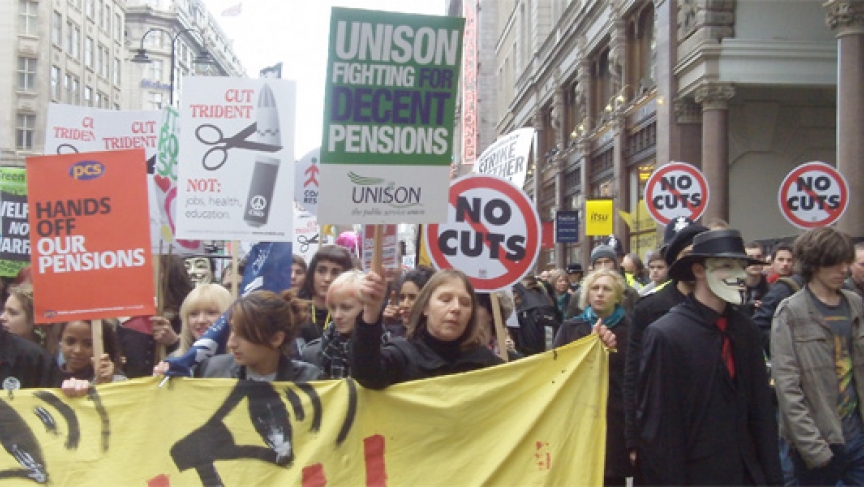 Unions accuse the government of failing to participate in proper negotiations in recent weeks, a claim rejected by ministers. (Photo by Laura Lynch.)

As many as 30,000 protesters turned out in Birmingham and 25,000 in London in two of the largest of hundreds of rallies in cities and towns across the United Kingdom, the Trades Union Congress estimated.

Unions accuse the government of trying to balance the budget on the back of workers and of negotiating in bad faith.

The government disputed an assertion that two million people had joined the action.

“Throughout the day it has limited the impact of the strikes significantly and as a result the majority of key public services have remained open.”

Trades Union General Secretary Brendan Barber accused the government of “rhetoric today … as predictable as it has been shallow.”

“The biggest strike in a generation cannot be dismissed as a damp squib,” he said. “Uniting so many people in such strong opposition to their pension plans should give the government pause for thought. They now need to give the negotiations real content. Unions wants to achieve a fair settlement, but it takes two to reach a deal.”

In the Commons, Cameron said he thought the government had made a reasonable, fair offer to public sector workers.

Maude, however, said formal discussions with civil service unions took place on Tuesday and that talks would take place with teaching unions on Thursday and with health unions on Friday.

“There have been informal exchanges but nothing that could be described as negotiations at the national level," a Trades Union Congress spokesman said.

Labor leader Ed Miliband said he had “huge sympathy” for people whose lives were disrupted by the strike, but he said he was “not going to condemn the dinner ladies, nurses, teachers who have made the decision to go on strike because they feel they have been put in an impossible position by a government that has refused to negotiate properly.”