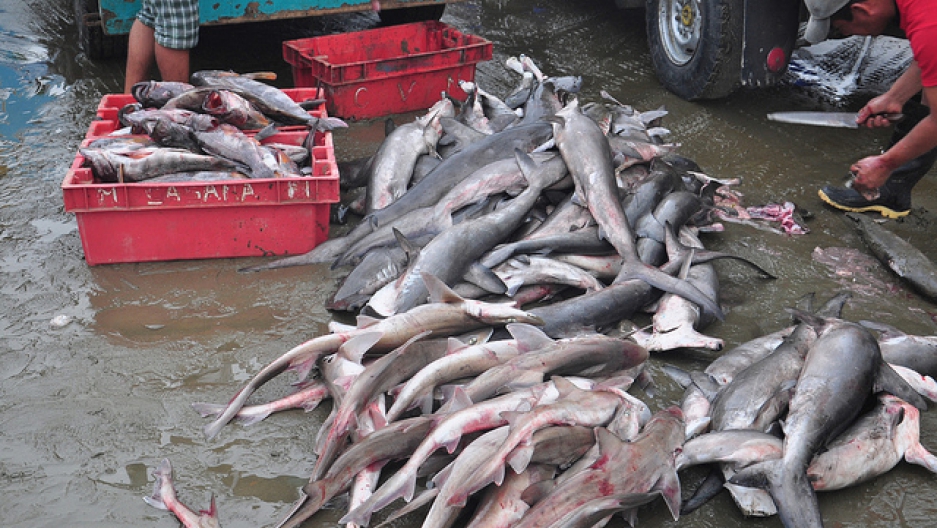 PUERTO LOPEZ, Ecuador — By early morning on a recent Saturday, a dozen silvery piles of bloody, dismembered sharks — many of them juvenile hammerheads — had been heaped on the shore of this bustling fish market.

Skilled fishmongers were busy at work carving off heads, tails and fins, as grinning potential buyers hovered around the carcasses, negotiating prices.

The more prized catches, like mature blues and pelagic threshers, fetch $100 or more, but the fins —worth between $25 and $100 for a set — are what these men were really after.

According to several reports, as many as 73 million sharks are being killed every year for their fins. Conservation groups say that it has further threatened some sharks, such as hammerheads, which are already considered endangered species.

Mexico recently announced plans to ban all shark fishing starting next year. But for now, Ecuador and Honduras are the only Latin American countries that have officially outlawed the practice, winning them plaudits for their efforts to protect endangered sharks.

More from GlobalPost: Is dolphin slaughter cruelty or custom?

But Ecuador also allows fishermen who accidentally catch sharks in their nets to sell them, without any methods to determine whether the sharks were netted on purpose.

The loophole, created in 2007, has inadvertently created a quasi-legal market for shark meat. Since then, the number of sharks that have been caught and killed has spiked.

The number of pounds of shark meat sold in Ecuador increased by more than 80 percent 2007 to last year, according to government figures.

“Why shouldn’t we be able to share in the riches?” asked one local fin trader at the market.

The move was intended to cut down on black-market finning through regulation, like imposing a $1 fine for every shark caught, and requiring fin traders to obtain licenses. But the fines are not always enforced, and the sum pales in comparison to the money fishermen and traders make from the sale of shark fins and meat.

Instead, the decree “essentially opened the door to an all-out massacre,” said Kelly Swing, a professor of environmental science at the Universidad San Francisco de Quito. “Once fishermen became aware of the Asian market for this product, there was no holding back.”

Before, all fins were bought and sold on the black market, and then exported to Asia via Peru. Now, local shark-fin traders said that their businesses have taken off. They’re able to send the fins to a processing plant in Guyaquil, Ecuador's largest and most populous city, before shipping them to Asia — cutting out more middlemen.

Given the flourishing market and the lack of enforcement, local conservation groups and biologists said that they believe the government has underestimated the number of sharks killed.

Ruben Lopez, one of two fisheries officials in Puerto Lopez, said that he fines fishermen $1 only for big sharks. Younger sharks — the majority of those caught in Puerto Lopez — are neither fined nor counted in government statistics.

This further decimates the already dwindling shark population because the young sharks don’t have an opportunity to reproduce before they are killed.

Because the government takes pride in its efforts to protect sharks, "it wouldn't benefit them to publish all the numbers,” said Fabian Pacheco, a marine biologist based in Manta. "It would look very ugly."

Sharks as a safety net

In this small fishing village, sharks help sustain the livelihoods of many poor fishermen.

“Everyone here is aware that targeted fishing is illegal,” said Jose Mite, president of Asopescar, a Puerto Lopez fishermen’s organization.

“However, there are many fishermen that accidentally catch live sharks and have the opportunity to throw them back, yet they have no incentive to do this.”

Lopez, the government official, said that sharks can “save the voyage” from a mediocre catch.

For most boats, a two-day fishing trip can cost more than $150 in gas, food and other supplies. “If the fishing is bad, they can at least break even by bringing in a big shark or two,” he said.

Protections on the horizon

Despite the seemingly bleak outlook, there might be hope for Ecuador's sharks. According to fisheries officials, the government is considering legislation that would ban all trade of hammerheads, no matter how they were caught.

If passed, the move would be one small step in the right direction, Swing, the professor, said. Otherwise, “Most fishermen will probably go right on harvesting sharks until there is nothing left to harvest.”