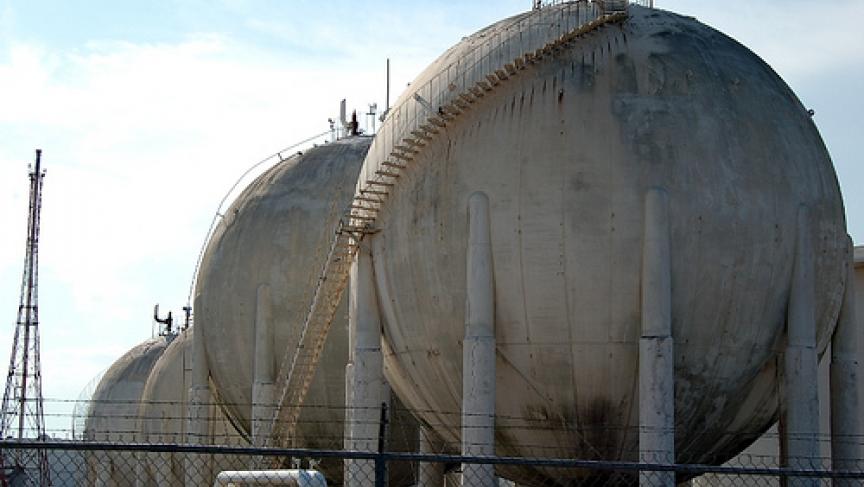 U.S. oil refineries, like this one in Corpus Christi, will export more petroleum fuel products than the import this year. (Photo by Flickr user laura0509, cc-by-sa.)

For the first time in more than 62 years, the United States will export more petroleum fuel products than it imports into the country.

While the United States still imports 8 to 9 million barrels of crude oil a day, declining domestic demand and rising needs around the world have enabled the United States to to export a greater amount of jet fuel, gasoline and other products. The switch was first reported Wednesday in the Wall Street Journal.

"That the U.S. is shipping out more fuel than it brings in is significant because the nation has for decades been a voracious energy consumer. It took in huge quantities of not only crude oil from the Middle East but also refined fuels from Europe, Latin America and elsewhere to help run its factories and cars," the Journal wrote.

The last year the United States exported more than it imported was in 1949.

What remains to be seen is whether a recovering U.S. economy continues to use less oil and whether growing developing economies maintain strong demands. According to the Journal, if that's the case, the United States could be a net exported for the next decade.

Tom Kloza, chief oil analyst at Oil Price Information Service, said the extreme growth in South America and its appetite for diesel and gasoline is a major source of demand for American refined products.

As mining, manufacturing and agriculture ramp up in the developing world, diesel fuel is one of the first things those economies need, Kloza said.

Kloza said that while the high demand for diesel overseas may drive up the price of diesel domestically, a couple factors may serve to actually make that more beneficial in the United States. When making diesel, gasoline must also be made, which could drive down gasoline prices.

And further, he said, when the Panama Canal is refurbished in a few years, fewer trucks will be needed to transport good cross-country. This will help American refineries continue to have a market for their products.

Kloza said, in the long-term, being a petroleum exporter makes sense for our country, both economically and as a matter of national security.

"We have world-class refineries. We can keep the jobs here by exporting some of the products to South America. It's like we're exporting products to North Korea," he said. "It's a sea change. It's something that hasn't happened since after World War II. It's a balance that's going to grow."

Kloza also predicted that before this decade is out, we'll see growth in our exporting of crude oil, as well as refined products.

"There's an awful lot of domestic production coming on and we're going to be less dependant on crude oil taken from offshore," he said.